Call of Duty: Modern Warfare II (2022) Review – At It’s Best With The Multiplayer

Does it succeed, well it’s a bit of a mixed bag? The single-player campaign isn’t bad but maybe a little too straightforward. The multiplayer on the hand remains mostly the same from the first game but with a number of tweaks that make the experience feel far smoother and all-around more fun. We’ll take a look at both single-player and multiplayer before wrapping up the game as a whole.

The Team Is Back The total length of the single-player campaign is around six hours. You spend most of the time as a soldier stationed in Mexico caught up in a conspiracy involving Iranian arms deals, stolen U.S. missiles, and a complex partnership of multinational special forces.

While this has the potential to be cool, the story felt rather a cliche and forgettable. It’s a very typical hero-versus-mustache twirling villain scenario without much to make it feel fresh. That being said, it’s cool to see popular characters like Soap and Ghost back in action. Seeing these two go from strangers to dependable partners fanservice at its best and makes their moments together feel even more badass. Modern Warfare II truly shows its pedigree as the graphics are gorgeous. There’s so much detail that any random frame of the game can be used as a background pic. The Mexican setting is beautiful, especially the various NPCs in the area. All these demonstrate Modern Warfare II’s superior graphics with impeccable detailing and beautiful lighting.

The shooting experience is still one of the best, the physics and sound feedback is very strong and you can get to hear different headshots and body shots. Assault rifles and sniper rifles are particularly praiseworthy. 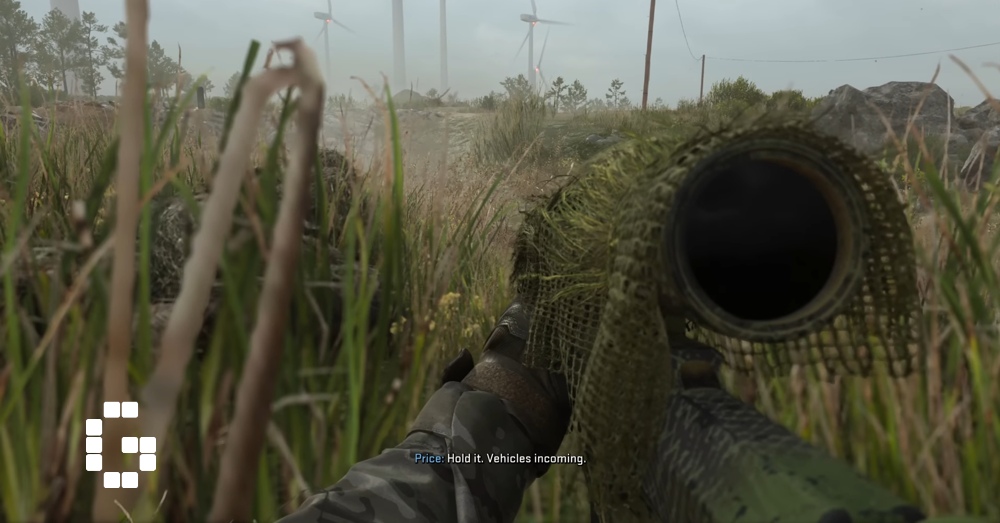 Being a reboot, the game also has a number of references to the original Modern Warfare series. These often come in the form of similar new missions like the “Suppression of Enemy Air Defenses”, an obvious tribute to Modern Warefare’s “Death From Above.”

That being said, each new level still feels distinct from the past games. They all add new content which keeps them fresh and interesting. In “Air Defenses”, you not only use a variety of airborne weapons to open the way for your squad, but also make sure not to accidentally injure civilians and buildings. This adds a whole new layer of challenge that keeps the game exciting.

The developers really had a lot of creative ideas when designing the levels. Unfortunately, because each individual level is fairly short, it feels like they don’t take advantage of the different gameplay mechanics as much as they could have. This makes the campaign feel a little too linear without the depth to make it stand out more. Now let’s go on to what most people are here for, Call of Duty Modern Warfare II’s multiplayer. I can safely say, that the multiplayer in this game is great. Not a lot changed since the preview I wrote a little while back but that’s not a bad thing.

Compared to previous titles, the multiplayer mode doesn’t make too many major changes to the combat but and adds a number of minor adjustments. The most notable of these is that the game now features a more realistic take on gunplay.

A good example of this is reloading. When you reload, you also cannot do other actions like changing weapons or running. If you try to move, the reload motion will be interrupted, and you’ll have to do it again. It’s a good choice, making the game feel more grounded and making the player think more about their actions. You have to consider how much much ammo you have left and when it is safest to change your clip. It encourages tactical thinking that makes battles more interesting.

These more realistic changes aren’t all winners though. The excessive recoil and muzzle smoke make it very hard to see the enemy when you aim, especially for new players without any attachment to their weapons. The maps also feel a bit more claustrophobic, with more hallways and corners to hide away for a surprise attack. I thought these added to the tension but I can see people finding these maps a little annoying to play around with. There are a total of Six Modes and while many of them are well-known to casual gamers, there are also some new ones being introduced in this game. Here’s a quick look at what the new modes have in store:

Here, you eliminate the opposing force or hold the package (a bag of Cash placed in the middle of the map) to win. No respawns but teammates can revive each other. It’s a very fast, very tactical round-based mode that emphasizes team play; the use of Equipment, Field Upgrades, Killstreaks, and defensive tactics. It’s pretty exciting and encourages you to think on your feet.

Each team has a prisoner to protect, held close to their spawn area. The hostages are impervious to enemy weaponry, but they’re immobile. Your goal is to find the enemy hostage and carry them back to your extraction point. Points are awarded for every prisoner prevented from being extracted (Defenders) or for every prisoner extracted or held at the end of the round (Attackers), or if the defenders are neutralized.

It’s basically a more intense game of capture the flag that rewards teamwork and planning. This is my personal favorite of new modes just because there are so many ways to play, either acting as an attacker or a defender.

A massive and chaotic battle with a mix of players and AI fighting alongside each other. Here you earn points by eliminating the AI and human enemies with Loadout items, vehicles, Killstreaks, and UAV or Counter-UAV assistance. The team with the most points at the end of an allotted time wins.

This is a straight-up kill-or-be-killed death battle. The fighting is crazy, there’s not much thinking involved, just shoot, shoot, shoot until you get shot yourself. It’s a mess but a fun one that’ll have you running back for more. It also involves more troops than any previous Ground War experience which just adds more to the insanity. In the previous games, if you want to get a new gun, you need to increase your level. In Modern Warfare II, however, when you unlock a weapon now, you’re actually unlocking a category of weapon(assault rifle or sniper), because each category can change the receiver to 3 or 4 different models. This means you don’t unlock new weapons with your player level anymore, but rather have to level up certain weapons to get a new receiver and other attachments.

What’s good about this system is that it cuts the fat out of level grinding. If you like to use the M4 assault rifle, actually using it can then unlock the FTAC Recon (the battle rifle version) and the 556 Icarus (the LMG version). These in turn unlock the M16 (assault rifle with burst fire) and FSS Hurricane (SMG version) respectively. It’s a much faster way to get access to your favorite guns. The perk system of the game also works a bit differently. You get Perk Packages that grant you two base perks, one Bonus, and one Ultimate. The two base perks you get will work as usual but, the Bonus and Ultimate work a little differently.

The Bonus perk is given during the game. It’s earned every four minutes and the Ultimate perk is earned every eight minutes. Although, you can get them a little quicker because the timers can be sped up as you increase your score. This makes it so you cycle through perks a little faster, which helps keep the game interesting. You’ll never know when the tides of battle change with a new perk. Looking at each section individually, the Call of Duty Modern Warfare II (2022) campaign isn’t too exciting. It’s nice to see characters like Soap and Ghost return to the series and the Mexican landscape looks great. That being said, the cliched story and straightforwardness make it a bit of a slog at times.

As for multiplayer mode, overall it’s satisfying. The new modes are welcomed features that I can see fans really took to and the gameplay touch-ups allow for a more nuanced and strategic experience. It also goes without saying, but the visual quality in both modes is stellar.

At this point, I think most people know if they’re interested in the new Call of Duty or not but for long times fans of the series, Modern Warfare II has a lot to love.