Popular rhythm game BanG Dream is coming to the Nintendo Switch, according to their latest livestream special. Bushiroad also announced the new dates for their live concert following Covid-19-related delays. 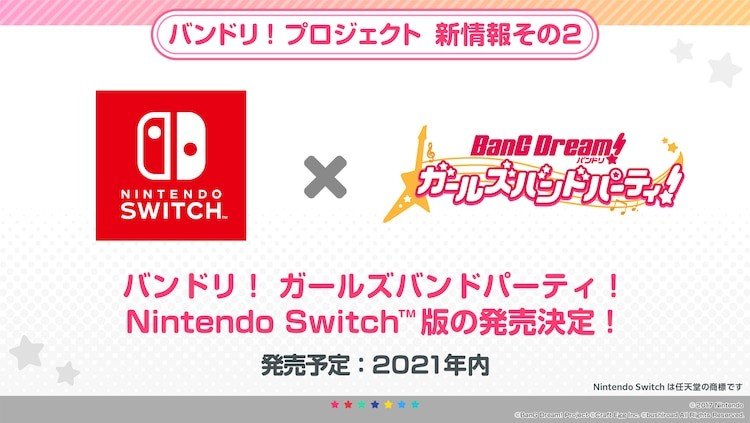 Based on the title, it looks like it will be a port of the mobile game, BanG Dream! Girl’s Band Party, but on the Nintendo Switch instead of mobile devices. Details on the port were sparse, such as if it would still include gacha elements and premium currency or if it would be a premium re-release of the popular game.

As of writing the release doesn’t even have a proper window, outside of a “2021 release”. This information will likely be revealed during future events as the eventual release date gets closer.

That wasn’t all that was announced during the special, however. Bushiroad also announced the new dates for the BanG  Dream concert, which had to be delayed last year due to the pandemic.

The BanG Dream Special Live Girl’s Band Party will run from June 5th to 6th. It will take place at the Metlife Dome in Saitama, Japan and will feature live performances by all the groups from BanG Dream’s voice actors. This even includes new group Morfonica, who was only added via an update last year.

BanG Dream! Girls Band Party!
Publisher: Bushiroad
Developer: Craft Egg
Release Date: 2017-03-16
Android, iOS
Popular rhythm game in Japan! Tap to the rhythm of over 140 songs to choose from. Play both original and cover songs from popular J-Pop artists and anime songs! Play your favorite songs on a level of difficulty that suits you!
Give us some support by subscribing to our Youtube Channel !
Tags: Bang Dream!BanG Dream! Girls Band PartyBushiroad
ShareTweetShareSend
Previous Post