Assassin’s Creed: Valhalla Preview – It’s Good To Be A Viking

By Odin’s beard, it’s time to be vikings. While the upcoming Assassin’s Creed: Valhalla won’t be out for another month, we managed to get a sneak peek at the upcoming game. This covers a few story missions, as your character, Eivor, seeks to install a new king. We also got plenty of time to roam the game’s open world, and mess around.

Thanks again to Ubisoft for the opportunity to check out the game. This isn’t the first time they’ve let us check out Valhalla, and you can read more of our very first impressions here. One of the coolest features they showed us in the demo is a look at how player choice will affect the world. Without getting into any spoilers, we get to see first-hand the fallout of many of our decisions from earlier on in the demo.

Thankfully the game avoids being overly patronizing about these choices right after they happen. Since our demo was limited in scope, some of the decisions we’d made had consequences in sections outside the demo, too.

These decisions are going to be an important part of forging alliances for Eivor going forward. It’s unclear how many of them are in the game, and if there are any hidden in side objectives. One thing’s for certain though, you’ll definitely need to start paying attention to the things you say. At a first glance, combat in Assassin’s Creed Valhalla can seem quite similar to its predecessor, Odyssey. However, it’s quite the different beast. Combat encounters have quite a bit of depth to them, with different weapons having different movesets tied to them.

The best example of this is the two two-handed weapons. We got to try out both the two-handed axe and the longsword in this build. Most games tend to treat two-handed weapons as identical, giving them similar movesets. Here, the two classes of weapon actually have unique movesets, allowing you to choose the axe for more damage-focused builds while the sword is a lot more flexible. One of the enemies, the Skirmisher, is a great example of this. It’s elite enough to have a nametag over its head, so you know it means business. More importantly, most normal attacks won’t hit them as they dodge through them. This makes combat encounters with the Skirmishers quite the timesink if you’re not prepared, since you’ll constantly be looking for ways to hit them.

The answer actually lies more in the game’s skill system. You have various special skills to use, using both your ranged and melee weapons. Ranged weapons tend to be a lot easier for stealth builds, with abilities that even let you snipe through walls.

The demo had a pretty normal spread of enemies. There were ranged enemies, as well as some regular sword-and-boards. Of course there was also the Skirmisher, who had a more agile toolset. Ultimately, you could get through most of these enemies without really fully understanding the combat system.

To make sure you did understand it though, the developers hid a nasty secret in the demo. There’s a wandering knight who severely overpowers you, and he just roams the countryside. The fight is pretty well designed, as you learn a lot about trying to drain his stamina, as well as avoiding attacks. Every now and again, I would look over at the title of the game and realize you’re supposed to be an assassin in this game. As fun as combat is, admittedly, the Assassin’s Creed series has lost its way a little from its stealth-sandbox roots.

Thankfully, your Assassin in Valhalla can still opt to, well, be an assassin. One of the game’s skill trees is entirely dedicated to the art of stealth, and your Odinsight functions similarly to previous games’ Eagle Vision. It’s slightly improved, however, as now marked enemies stay visible even through walls.

Of course, instantly backstabbing people does tend to mess with the balance of the game’s more RPG flavoring. Instead, they’ve made it so you can’t really assassinate enemies that exceed your level. However, you can spec into a skill to remedy this, where assassinating high-level enemies requires passing a quick-time event to succeed.

The series’ signature synchronization points are also back, complete with cinematic leap of faith. It’s almost jarring seeing Eivor, such a hulking viking, doing these agile leaps in the air, especially when they fall into the bale of hay afterwards. One of the big new features in this demo is the village system. You’ll be able to upgrade your village using materials you find in chests. Upgrading these buildings is going to be pretty important for your clan, especially if you want to do things like raiding. Some of these buildings even have specialized functions, such as one that allows you to fish.

In your village there’s plenty of things for you to do, such as mingling with your clanmates. You can even partake in dice games, which is a fun way to pass the time.

Of course, it wouldn’t be a viking game without some longboats. Similar to all the ship-style content in previous games, you can get on your longboat with some NPCs and go pillaging. This is a great way to get more resources for your village, and is one of the big draws of the game in general.

Of course, the longboat is more than just a vehicle to your next objective. Similar to the sea shanties from previous games, you can really use these segments to immerse yourself in the game’s world. NPCs talk and sing, really adding to the flavor of the world. 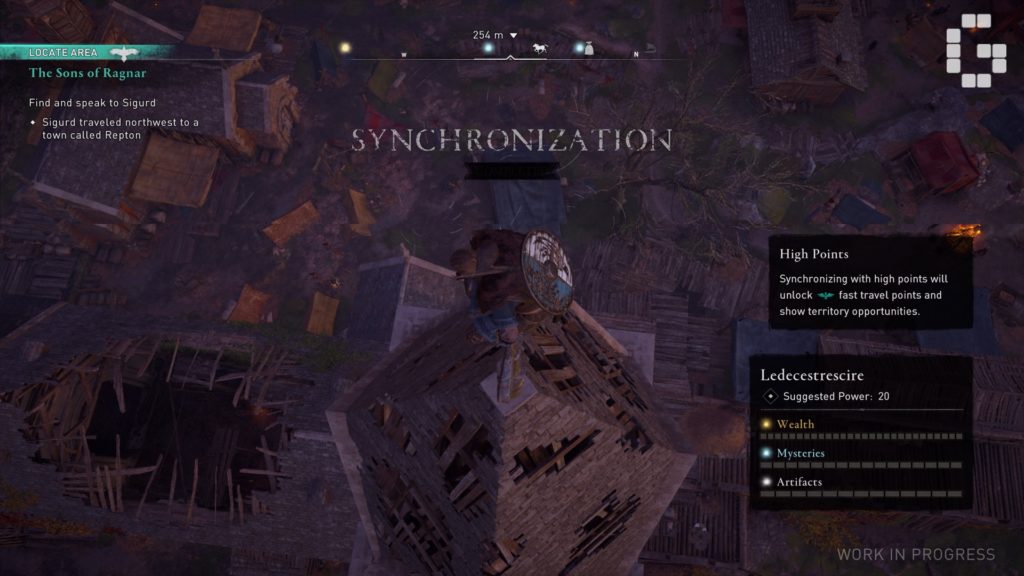 Of course, it wouldn’t be an Assassin’s Creed game without an extreme amount of exploration. Thankfully, the map for Valhalla is significantly less cluttered than some of its predecessors.

You also have a horse again, that follows the videogame logic of coming to you no matter where you call it from. The programming on the horse is pretty great, since they can automatically seek out roads and follow them. Similarly, they can also be set to go to your target automatically, so you can set it up in cinematic camera as you roam the countryside.

While this is a cool feature and all, I feel like it’s a bandaid to a very real problem open world games tend to have. That is to say, you wouldn’t need to have things like a cinematic camera and an automatic horse if, well, your world was a little more fun to traverse. The large map is technologically impressive, yes, but the fact that until you get between your points of interest there’s nothing really there is a little alarming. Gripes aside, it looks like Assassin’s Creed: Valhalla is going to be another good entry in the RPG-line of Assassin’s Creed games. It’s got interesting side content like raids, a return to form with assassinations and interesting enough enemy design that you almost wouldn’t want to go through this the stealth way.

Assassin’s Creed: Valhalla releases for Current-gen consoles November 10th, and will be available on next-gen on their respective launch dates.