Mr. Yamazaki talks about shooting a gun for the action scenes, and his favorite parts of Season 2

Kento Yamazaki reprises his role as Arisu in the Netflix Japanese drama Alice in Borderland, and we were able to catch up with him for an interview about what fans can expect from the new season.

Mr. Kento Yamazaki got his start in modeling before getting his acting debut in the tv series Atami no Sousakan. Among international audiences, he’s most well known for his role as L in the live-action Japanese Death Note TV series, Josuke Hagishigata in the live-action Jojo’s Bizzare Adventure movie, and Saiki Kusou in the live-action Psychic Kusuo: The Disastrous Life of Saiki K movie.

Alice in Borderlands is just the latest manga adaptation that the actor starred in. In the interview, he told us more about what he enjoyed about the series and what to look out for in the second season.

What was your feeling going back to Alice in Borderlands and how did you prepare for the new season?

In Season 1, I was able to work with the best people and the best crew in Japan. We’ve been able to deliver the series to audiences worldwide.

Storywise, we were able to clear the first stage with Season 1, and now we are embarking upon stage 2 but there are many mysteries that are left to be told in The Borderland. We were left with the sense that there is an answer behind all.

When we ended Season 1, we were halfway through the manga series. I think in general Season 2 is not just a death game that you’re seeing. You really dig into the existence of each character and we dig into the theme of what are we doing on this Earth, and why are living these lives. It poses questions about what is life about and what is it to live. These are deeper questions that were also in the original manga. We’ve been able to deliver these in the drama series and deliver them to the world.

What can we expect from Season 2 of Alice in Borderlands both in terms of characters? 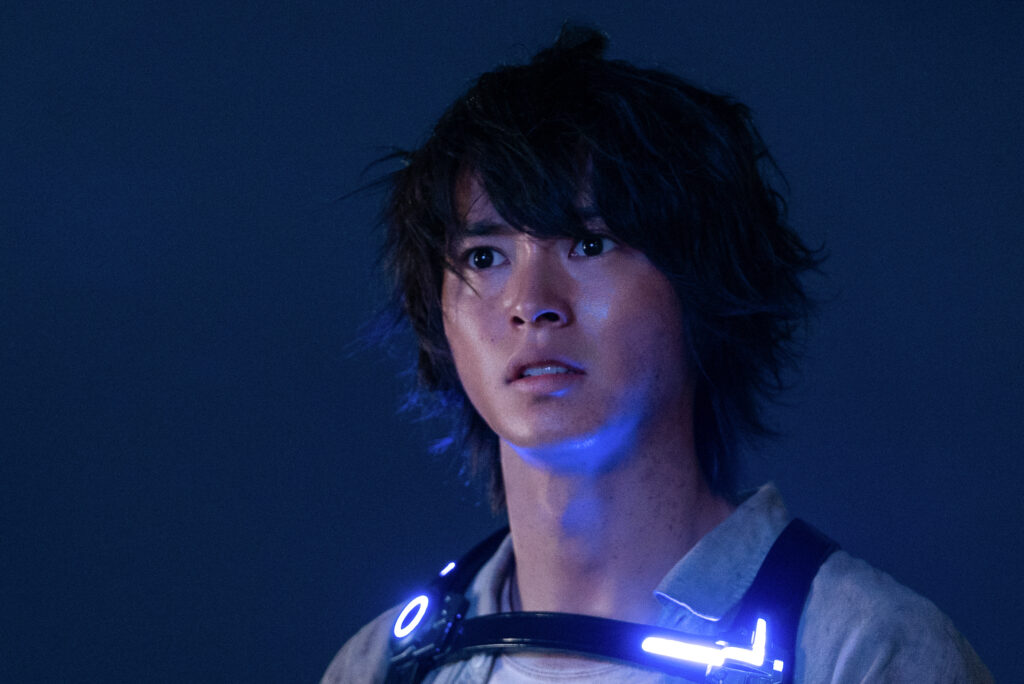 In the first season, Arisu was trying to protect himself and he has a lot of vulnerability. Because of that, his friends end up dying. He is thinking about why he survived when the others didn’t.

Then he meets this very important person, Usagi and by meeting her, he overcomes his selflessness and his weaknesses. Usagi’s presence and the sense of surviving together, mentally I think he’s much stronger. In Season 2 you can expect more of this development between the two leads.

I’ve heard that you’ve had to do these action sequences for the first time. How did you prepare for it?

Yes, there’s the car action sequence and the gun action sequence. Arisu lives in the normal world so when he actually shoots a gun, he has this fear of handling a real firearm for the first time so I had to portray that realistically even on set. I don’t know how to explain it but when you hear that sound [bang], you have to know how to react in the proper way. I think I was able to react to it realistically.

What are your thoughts on Season 2 and what is your favorite part of the season? I would say that all of the games have left a deep impression on me. I really like the games that appeared in Season 1 but in Season 2, when you look at the different cards you will see they are playing with the face cards. It’s becoming a more challenging game that they have to embark upon. In all of the games in Season 2, they have to take on more difficult challenges. More than anything it’s the fact that the city itself is now part of a game. We have to run away from the King of Spades across all of the places, we have to do all these gun fights and work together to fight our opponents.

I don’t know if I’m allowed to say this but we have to fight a particular opponent that should be very juicy and very interesting for you all to see.

What was your reaction when you got the script for Season 2 and saw what was going to happen?

Well, we had the original manga but the games that Arisu is participating in Season 2 are different or more original [compared to the manga]. Of course, I like what is portrayed in the original manga, but when actually adapting the story into our show, I think it’s thrilling that we have some original aspects. Of course, doing the same thing [as the manga] is also exciting but there’s more intriguing that we have these original aspects and that was the kind of script we received for Season 2.

Arisu is participating in more physical games. In Season 1, he wasn’t really aware of what was going on but he just had to play these games. For Season 2, he volunteers. He willingly wants to participate in these games and then you have the boss, or you have the so-called game master, the host, and the words that hosts leave behind. They’re very interesting like Kyuma or Mira’s words, I really like them.

Aside from Arisu, who is the one character in Season 2, you find the most interesting or intriguing?

All of them (laughs). That’s a pretty hard question actually. One of my favorite characters I would say is Kyuma and Chishiya. I like them both. Kyuma, his philosophy, although he’s an opponent, he’s very likable, he’s a good guy and he’s very straightforward, he really charges towards you in a very straightforward manner. Like a really direct fighter and everything like that.

Arisu and Usagi’s dynamic was a major focus of Season 1. Why do you think they work so well together? Because you’re living in a world of survival. There’s betrayal and people hurt each other and con each other. In that world, they [Arisu and Usagi] understand each other from the bottom of their hearts. There are no lies and they’re able to build up this dynamic relationship in order to survive. So because they have this bond, they are very well connected emotionally.

I think in real life if you have a team that works well together, you come to really value and trust them. You end up having this very special relationship with them. So, in order to live together, the way they cooperate and help each other it’s important. They also have this romance or love aspect. I just want to conclude with: it’s the power of love.

For those that haven’t watched Alice in Borderlands yet, why do you think they should watch the series?

It is something that started in contemporary Japan so I think it’s accessible because it starts in our contemporary everyday life. Of course, it also toys with the elements of games and gaming when they stumble into The Borderland.

I think it is a story that is enjoyable and accessible to many different kinds of people. In Season 1, we worked on a set based on the Shibuya scramble and it was really quite something to see. That Scramble unmanned, without any of the people when it’s usually bustling all the time. It’s that kind of quality that we’re bringing to you with a story that is staged in Japan. So visually, I think it’s going to be very impactful.

As for the contents of the games, it’s really a matter of life and death for the players. It might be a little frightful for some viewers but the stakes do have to be high in these games. That makes them much more interesting so I think you can enjoy it from that vantage point as well. As an entertainment piece, you can enjoy it in that way but you can also imagine “what would I do if I was in the Borderlands myself, it really churns the imagination I think. Everybody has played it [a game] with a deck of cards before.

Season 1 taught us some tough lessons about friendship and that leaving is more than just surviving. How is Season 2 built upon this to keep audiences interested? Well depending on the person, it portrays how people live their lives. I think everybody is right, for every character, the way they live, I think it is right for every character. Someone who is considered a villain, just because they are considered in the minority opinion, is considered evil but what if 90% of people agreed with that evil opinion, then 10% of the heroes would be the villains? So everybody might have the wrong lives. It really made me think about this and it was convincing.

I can’t say something because it would be a spoiler but for the people that live in The Borderland, the current world that these people live in and their view of life, in that world, it’s important to feel life is a certain way and in that sense, it’s very important because it depends on how your heart is. Through my experience in this show, I feel and learned that the heart is very important. How you perceive and capture life, it’s all about the heart.

Many fans have praised Alice in Borderlands saying it’s one of the favorite best adaptations of a manga series. How does it feel to be part of such a high-profile series?

Manga is something that Japan as a culture is proud of. Nowadays there are a lot of live-action manga adaptations that are seen by a large global audience and I am very proud of that. We’re thankful to Kento Yamazaki for speaking to us. Alice in Borderlands Season 2 is shaping up to be a great continuation of the first season complete with new games and deeper development for the main characters. We wish Yamazaki-san and the rest of the cast and crew the best of luck as they travel deeper into the games of the Borderlands.

Alice In Borderland is available for streaming on Netflix

How Pokemon Made Interacting with Your Pokemon Fun