AGES 2016 Controversy – who is really in charge of the prize money?

by Catosaurus
in All, Industry, News
Reading Time: 6 mins read

AGES 2016 ended a good 4 months back, and in-between, we’ve reported about the lack of response from organizers and sponsors regarding the matter of prize pool and salary distribution. You’d think that it’d be over by now, but sadly, it is not.

AGES 2016 (ASEAN Games for E-Sports) is one of the largest tournaments ever held in South East Asia, the prize pool amounting to a whopping RM 1,000,000. There were dedicated tournaments to Dota 2, CS:GO and FIFA 16 respectively. No joke, it’s big.

After all the spectacular games at AGES 2016 had ended, the organizers promised that all winners and contractors would receive their share of money within 90 days starting from the day the tournament ends, 29th May 2016. Today marks the 115th day since the end of AGES 2016, and we’ve yet to receive any news from the organizers.

All of it started when a few winners tried to contact the people in charge of AGES 2016 via their Facebook official page. The admin of the page, however, seemed to give fairly vague answers to their inquiries. The players soon dug in to look for specific organizations that hosted the event to ask for an explanation, and that’s how all the controversy between organizations started.

So who exactly is involved in AGES 2016? 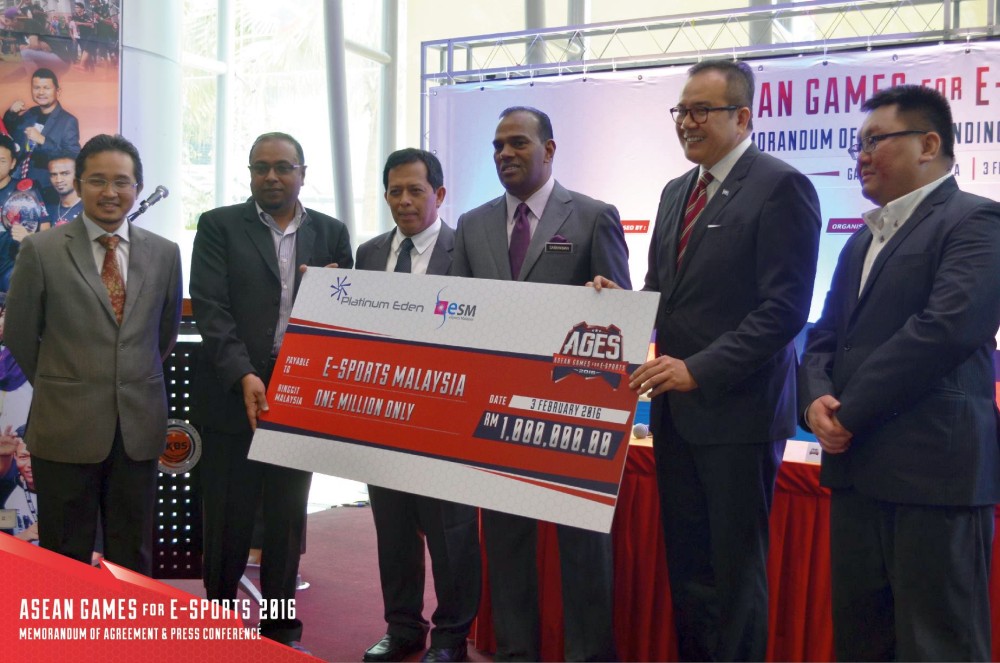 The three main organizations involved in this fiasco are Platinum Eden Sdn. Bhd., who are the main organizers and supposed sponsors of the event; Friends Worldwide Sdn. Bhd., appointed by the former to manage the event and handle communications; and lastly Esports Malaysia (ESM), who are in charge of supervising eSports events in Malaysia and is registered under the Malaysian Sports Commission, also the endorser of AGES 2016.

Let’s start from the beginning:

About a month or two after the event ended, some of the winners were trying to get into contact with AGES 2016 Facebook page, but to no avail:

The response from AGES 2016 was far from useful, as they only replied the same phrase like a broken record: “Will get to you shortly. Thanks for waiting.”

Many continued to spam the Facebook page with comments and posts, but no response was given.

People then decided to wait until the end of the 90 day promise, since they had no way of reaching the organizers. However, much to everyone’s disappointment, there were still no updates from the organizers, thus Dota 2 shoutcaster Muhammad ‘Flava’ Farouq decided to direct the questions to AGES 2016’s endorser, Esports Malaysia, as the reason for setting up ESM was to protect and regulate the eSports scene in Malaysia. 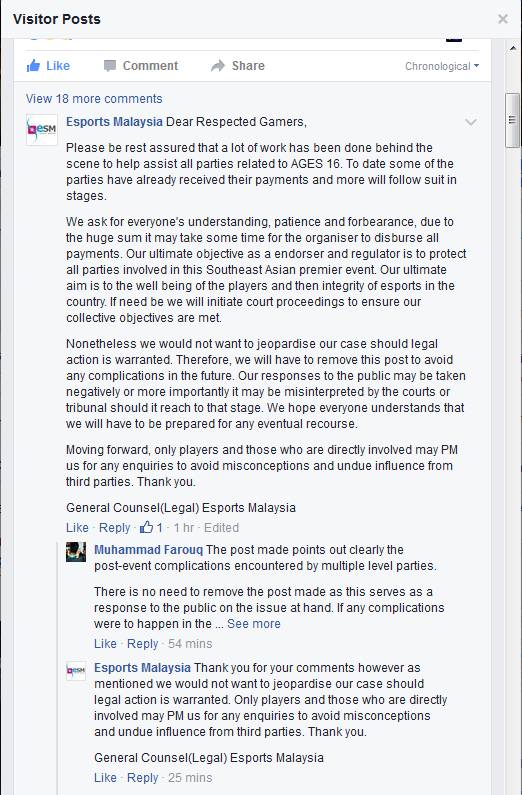 This post was soon taken down by ESM, while also disabling the ‘Visitor Posts’ feature from their Facebook page.

ESM posted a new status on their page with a Google Form attached to it afterwards, asking all winners to send in their information to use as evidence against Platinum Eden Sdn. Bhd. as well as Friends Worldwide. Even so, there were no updates after the players sent in their reports.

Fast forward to September, AGES 2016 Facebook page updated the masses saying that they will be issuing a formal announcement regarding prize disbursement on 19th September. Again, players were faced with silence from all parties when that day arrived.

This post drew the attention of Mr Rizal Rozali, the Head of Client Management of Friends Worldwide: 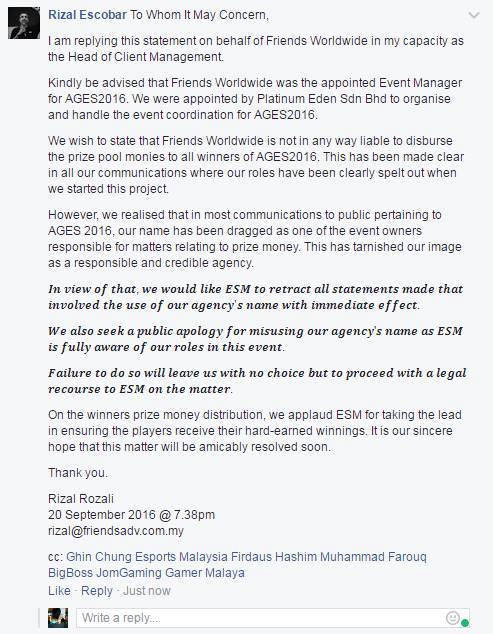 tldr; Friends Worldwide was appointed by Platinum Eden Sdn. Bhd. to organize and handle the event coordination for AGES 2016, they have nothing to do with prize disbursement, and they want a public apology from ESM.

His comment was later deleted by ESM again (which they are notoriously known for by now). Flava sounded his concerns about this and took down screenshots, asking why ESM directed him to Friends Worldwide and said they were responsible when he questioned about the prize disbursement.

ESM seems to be clear about Friends Worldwide’s position in this matter: they were hired by Platinum Eden Sdn. Bhd., end of story. They have nothing to do with the prize disbursement. 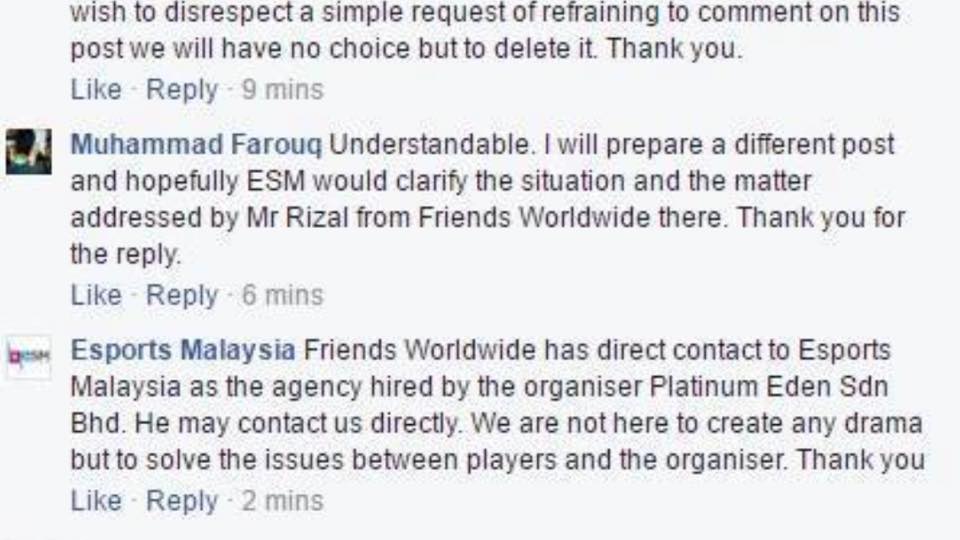 There are some who suggested that ESM should “be tactful when responding publicly”, and that they should not be defaming Friends Worldwide lest they have to face a lawsuit. ESM, however, responded (in our opinion) an unprofessional manner:

This morning, ESM’s secretary, Mr Rinie Ramli, updated a status on Facebook with a screenshot of a WhatsApp group conversation attached, stating that ESM wishes to invite all those involved to join them in a conference on Monday to make things clear. 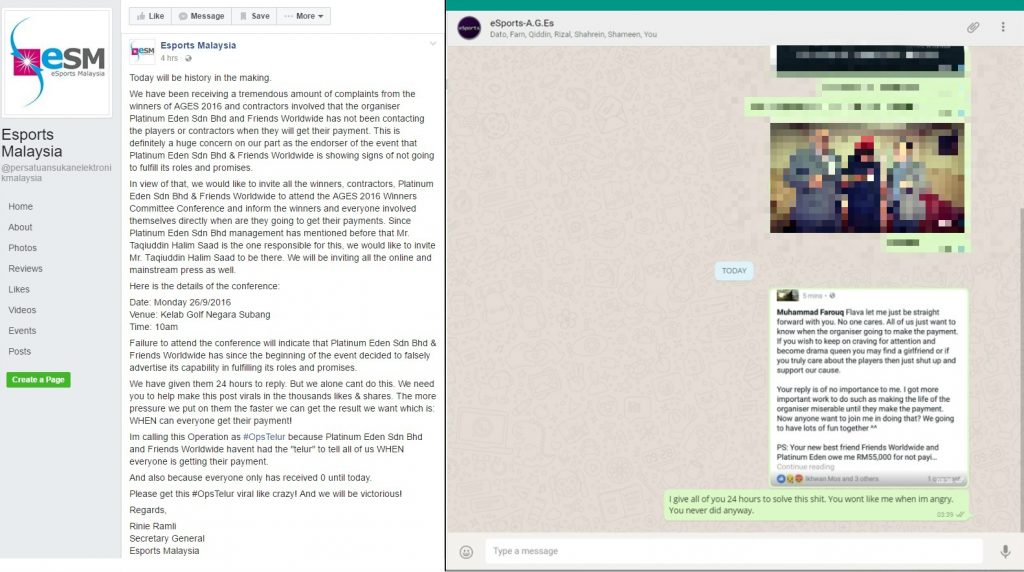 Mr Rinie also shows a screenshot of his WhatsApp group conversation, demanding that he is giving [Platinum Eden Sdn. Bhd. & Friends Worldwide] to solve the matter at hand, and that they “won’t like [him] when [he’s] angry”. Along with it was another screenshot of him calling out Flava in a fit of rage:

Muhammad Farouq Flava let me just be straight forward with you. No one cares. All of us just want to know when the…

Apparently, Mr Rinie took out RM 55,000 from his own pocket to pay some of the marshalls, shoutcasters and contractors. Which brings us to some questions (that are solely GamerBraves’ opinion):