A Space for the Unbound is a slice-of-life adventure game that tells the tale of overcoming anxiety, depression and supernatural powers.

A Throwback to the 90s Developed by Mojiken Studio and published by Toge Productions, A Space for the Unbound takes place in the late 90s of rural Indonesia where it follows a high school student named Atma.

The game lets the players interact and immerse themselves within the world instead of imagining what happens behind the scenes in Visual Novel games.

Stepping into the shoes of Atma, we set off to uncover the supernatural anomalies that happen in his everyday life, reeling in more questions than answers. While the story keeps you guessing, it’s also a chill and relatable experience that had me reminisce my teenager years, going off to random places and just enjoying life. A bittersweet trip down to memory lane, when times were simpler. Bear in mind, A Space for the Unbound isn’t just all rainbows and sunshine. The game talks about some of the more heavier topics like depression, anxiety, and other mental health problems. And while it might not be everyone’s cup of tea, I still implore you to check out the game.

A good story is nothing without its characters, and luckily the game has its fair share of good characters. One of which is the game’s main protagonist Atma. He’s not the hotshot protagonist with their can-do attitude, he’s just your average teenager with some supernatural powers. But his attitude and the way he reacts to scenarios is what makes the story feel so enjoyable. He can be silly, serious, sympathetic, hardworking, and patient, but most importantly he’s clueless about all these crazy phenomenons happening around him, much like we are. This makes Atma such a relatable character. Him having his own personality also makes for a more interesting narrative, being able to see how the story unfolds through someone else’s perspective. Rather than being a self-insert blank slate of a custom avatar.

Another character that I appreciate a lot is Atma’s sweetheart, Raya and is also someone that I imagine will shock a lot people, though I won’t explain why.

Stay for a While I’m already personally a big fan of pixel aesthetics and A Space for the Unbound is simply just beautiful. While it’s not as “smooth” in contrast to the HD-2D style like Live A Live or Octopath Traveler, the game makes up by offering a very nostalgic atmosphere that brings you back to 90s Indonesia.

Minor details like having waroeng, a wedding tent blocking a street, a guy listening to keroncong music, an old mum cleaning up the streets with a watering hose. And best of all, stray cats everywhere where you can pet and give names to. The cherry on top are the individual scenes throughout the story that enriches the experience. Scenes like the cinematic shots or even just the random events, you can appreciate the quality of the pixel art. Dive into the Unbound While A Space for the Unbound brands itself as a casual adventure game, there’s surprisingly a lot of stuff you can do. The game is relatively linear but you’re given a lot more freedom to explore places to progress through the narrative.

The places you can to go when starting off the game are very limited, and the puzzles you need to solve are pretty easy too. But the game opens up after completing the Prologue, and there’s a bunch of new things you can experience in each of the chapters.

By reading the Magical Red Book, it unlocks Atma’s supernatural powers of being able to go inside people’s mind. This mechanic is called Spacedive and you’re only able to use it when encountering individuals who are facing mental problems, or people who have emotional baggage that they can’t let go off. 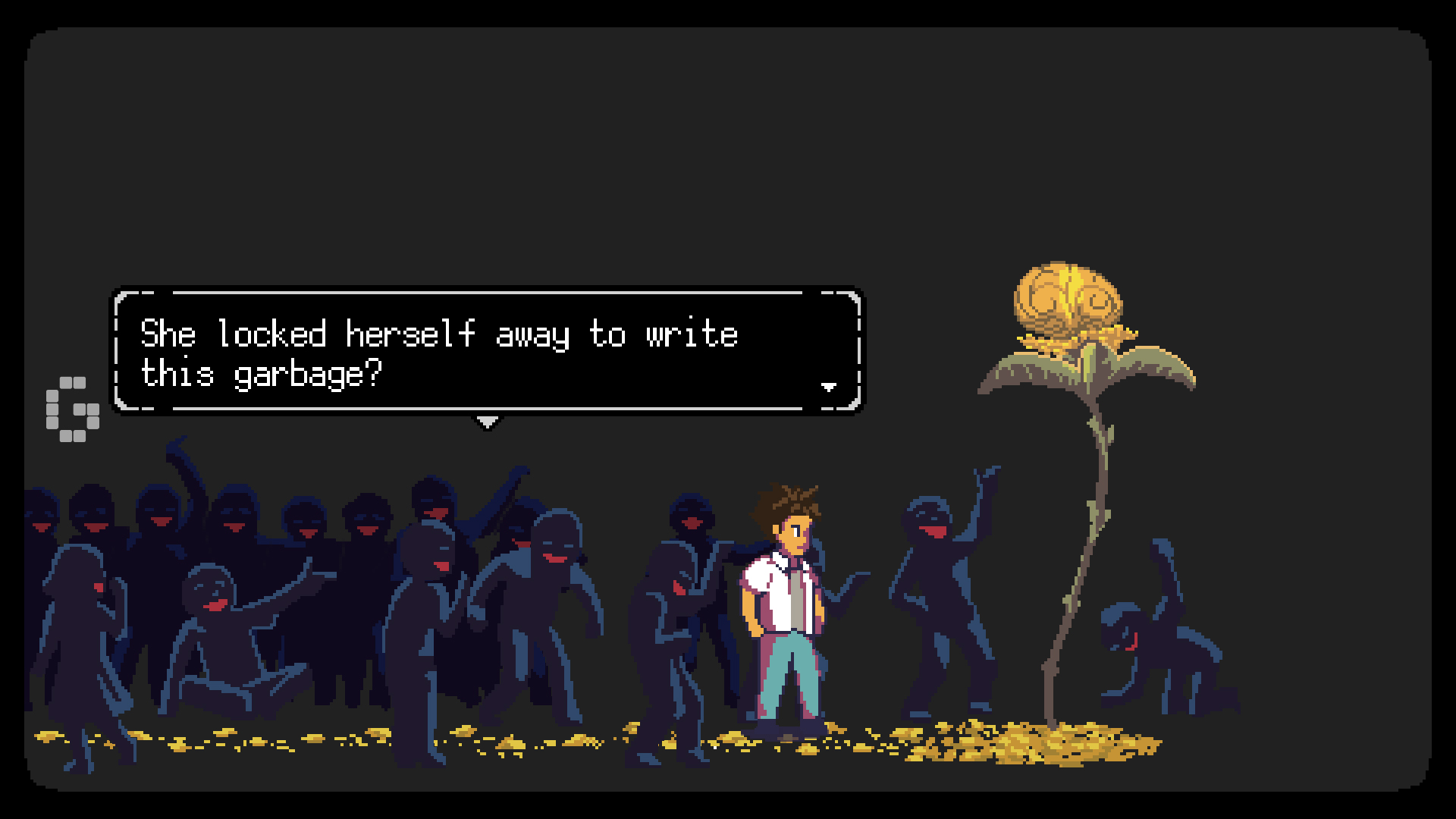 These individuals are marked with yellow flowers over their heads which you can later interact with to go inside their minds. Once you’re inside, you’re able to see the imagery of the struggle that they’re facing and find the resolution that they look for. The Spacedive always involves some puzzle solving and sometimes you’ll need to think outside the box to find the specific items or clues.

One of the biggest factors as to why the puzzle solving aspect is by far my favourite part of the game is how they manage to incorporate storytelling of the characters that you tried to help out with. It’s also really neat that the puzzle is designed to fit in with the person’s state of mind. While most of the puzzles are relatively easy to solve, things can get trippy when Crossdive is involved. A mechanic where you can enter someone’s mind, that you meet inside another person’s mind. A Mind-Inception of sorts, which I admit does prolong the process of progressing to the next story segment. But it’s still a cool concept nevertheless.

Aside from the mind hopping, there’s various mini-games to play, collectibles to hunt, tales to uncover, and even combat scenarios that uses Quick-time events. So if you want to take a detour from the main story, there’s plenty of things for you to do. While some of the objectives can feel like a chore to do and how some chapters with only involve one main task that seemingly drags on; A Space for the Unbound is designed in a way that keep things engaging as well as unpredictable.

Although, there’s some minor personal gripes I have with the game. One of which is with the dialogue choice where you can swipe left and right with. It threw me off at first where I had mistakenly skipped through some dialogue, but fortunately there’s a text log option where I can read through previous dialogue. Speaking of choices, I would’ve personally preferred if the game had more severe consequences in certain events, instead of following this one thread. Again, this is just personal preferences where I would like if my character could be a bit more flexible in how they’re portrayed, which also helps with replay value. It’s safe to say that A Space for the Unbound was definitely worth the wait. The game manages to give off a relaxing, beautiful and unique story that’s also engaging, reeling in my attention from start of finish. Even while putting in so much focus with the story, the game doesn’t cheap out with its gameplay where it introduces some intriguing and refreshing concepts with Spacedive and Crossdive mechanics.

The game is always unpredictable and keeps you at the edge of your seats. It’s rare to find a relaxing game that manages to keep you fully immersed like in this 90s Indonesia mixed with the supernatural. And while I do have some minor nitpicks with the dialogue choices, my gripes pale in comparison when compared to the whole package. A Space for the Unbound was reviewed on PC via Steam.