Ubisoft revealed the roadmap for the first year of post-launch content for Riders Republic which includes free seasonal content and exclusive content for Year 1 Pass owners.

The Year 1 Roadmap For Riders Republic 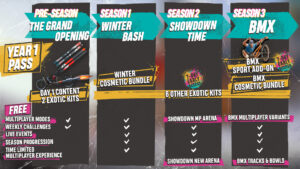 The Year 1 Pass content can either be bought as a standalone or through pre-ordering the Gold and Ultimate Editions*** that contain:

If you want to learn more about Riders Republic, check out our interview with the game’s lead game designer Manfred Neber