Developers Two Point Studio’s upcoming sim game – Two Point Campus is coming out around the corner and we got our hands on the game, here is our full review.

The Presentation is graded towards your final marks 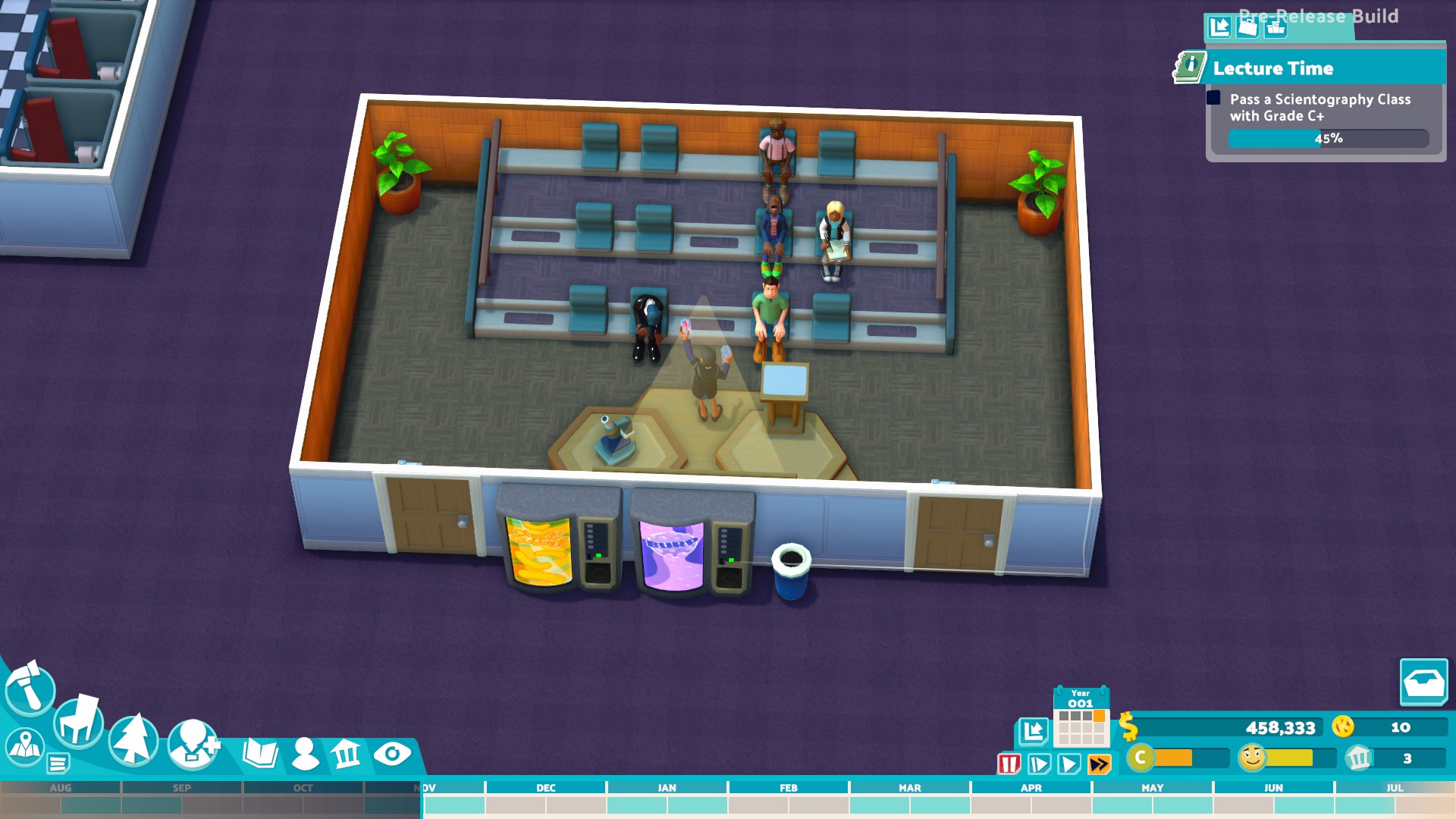 I personally feel like Two Point Studios have nailed their iconic visual style as seen in Two Point Hospital and now in Two Point Campus, which I have grown quite fond of, especially in this build of the game since it gave us access to the new courses that we weren’t able to access back in the preview.

In this build of the game, Two Point Campus have rearranged the level structure where they put in two new levels before going through the Wizardry Level. Those two levels being the Robotics Level of “Mitton University” and the other Sports Level of “Fluffborough”. And speaking with the sports level, the animation you get from that level is just really fun to watch with one of my favourites being the Cheeseball Challenge with how silly and well-made the animations are. I love how you are able to arrange a competition between two teams and how they animate out the entirety of the best of 3 format out. Even though the sport just requires the students to stand in place during the competition, I still find it really fun to just stare and watch how the match will play out.

In terms of the game’s UI, it’s pretty much similar to how it is in the preview. It’s much cleaner than the one in Two Point Hospital which makes the overall experience of playing Two Point Campus much enjoyable. But there are some aspects of the UI where it can be pretty obscure, especially with the one slider that allows players to adjust the wages of the staff. The least they could do is probably make it bigger, or maybe have a label next to the slider. But that’s just one of the minor gripe that I have with the presentation of Two-Point Campus, despite its flaws, I’m willing to look pass it because the good outweighs it.

Class is in Session This part of the gameplay is pretty much the same as it is in the preview. When expanding your campus by buying out a plot, you get to choose between the option of With Buildings or Without Buildings. The plot with buildings is obviously more expensive because like in the name, it comes with buildings. While the one without buildings is cheaper to build, but not for long because if you were to build it up, you have to pay a lot, and it’s not entirely cheaper than the pre-built one either. Although, you get to have the creative freedom to do whatever you want with the plot, so if you’re the person who like to min-max things or just mess around in the game, this would be your go-to option.

Having the option to build up your own campus structures in your own vision  is automatically a win in my books. Being able to modify your structures mean that those pesky walls sticking out of the corner won’t trigger my O.C.D tendencies of placing down buildings in a symmetrical manner. Although, having the creative liberty also means that it will cause the issue of deciding how to arrange and lay out your structures, just make sure that you have enough room to build out everything you need or want.

There’s also a neat feature that can be found in Two Point Campus where you can save the template of a room that has already been built, so that you can reuse that template over other levels which can save up time. It also shows you how much money is needed to build out the room so that you can plan around that when deciding on reusing a template.

Satisfying your students needs in essential in Two Point Campus, so it’s up to you to build up dorms, bathrooms, showers, student lounges to make your students happy. Meanwhile, you’ll also need to decorate your school and make it more attractive because it’s tied to students happiness levels too.

The student’s happiness level is important to keep track of because if the students is not happy enough, they won’t perform well academically and eventually, the students will straight up refuse to pay up the school fees.

Which means now that you have to take care of the happiness of both your students and faculty staff members which increases the difficulty by a bit, but it’s still manageable. But features can be a bit tedious to manage, especially when you are low in the game’s currency of Kudos, that is needed to unlock items that are needed for the students to complete their assignment. Once a school year ends, the players can choose if they would want to add in another course to the school syllabus. And of course, adding in a new course will also mean that you need more Kudos to build the required facilities tied to the new course. Just like in real life, players will have to make sure that they are financially responsible so that they can avoid losing everything they own.

There will also be in times where natural disasters can happen, and it will generally make your staff and students panic which will cause a huge mess. This is where the school janitors come into play, so make sure you have janitors available or it’ll take forever to clean up the mess. Every individual students have their own needs and wants, and each of them have different levels of understanding of a particular subjects, just like real life kids. Some of them can get good grades easily while others may lag behind and require some help. If you open up the student’s profile and see that they have a grade lower than what you want them to have, you can send them for private tuition to improve their academic performances. Just like every other Asian parents sending in their kids to Kumon. Two Point Campus offers a really convenient way to take care of them, since you’re able to sort out the things that you want to look at pretty easily. But there are some certain scenarios where what they want can’t really be solve despite being near a facility that would solve it.

There are some instances where one student would feel unhappy because they want food, despite being next to three different stalls. Or another instance where a student wanting to go to the toilet while standing next to the toilet.

You’re able to increase the wages of the faculty staff members of the campus but weirdly enough, you can’t exactly reduce it. Although, you can just out right fire them though, which is again weird that it’s the only and final option for when your financial status goes down hill.

You’ll also able to train up the staff members once you unlock the training room which doesn’t really take long to unlock so that won’t be an issue. They’ll slot in the training schedule between their regular work schedule so you technically don’t have to hire a new staff.

Normally, the staff will go and find work for themselves just like in Two Point Hospital, so you can let things be somewhat automatic, but there are some cases where they will prompt up a request that some rooms in the campus are missing out on staff members, which requires you to manage that by yourself. But in my opinion, they could have shown which staff are free and who is working where a little bit better so that it could makes things easier to manage. The controls are pretty much the same as it is in the preview. Meaning that you still can’t have full control over the camera rotations, you’ll be stuck once you pick out an axis, and if you want to turn the other way, you’ll need to let go and re-engage the button. Which can be a bit tedious at certain times, but it’s something that I found it to be something that needs to get used to.

Personally ,the two-times speed isn’t fast enough because I enjoy letting the game run out the situations while waiting out for a specific thing to get completed. Having a x4 or a x6 speed would be a nice addition to have in future Two-Point games. Over the course of my review, Two Point Campus is a very solid management sim game, and by far the funniest management sim to date which makes Two Point Campus one of the best out there that you can find. A lot of the things are really refined, that even a newcomer to the sim genre can pick up and understand the basics of the game relatively quick.

It’s silly and it’s enjoyable which is are the two charms of the game where I find to be refreshing for this genre. While both Two Point Campus and Two Point Hospital are management games made by the same studio, both of these two games feel very different from one another.

In campus, you’ll need to think more about how to make everyone happy so that you can sustain your school while in Hospital, you can mess around with your patients and still earn tons of money.

Two Point Campus is a game where you’ll pick up for a bit when you’re feeling bored and before you know it, you’ve spent multiple hours in one sitting.