This Snorlax Mug is Perfect For a Lazy Morning

The Pokemon Company has asked us to indulge our inner idle with one large yawning mug of Snorlax, the sleeping Pokemon. It holds around 50 oz. The perfect mug for a sleepy Monday. Looks like it could hold a lot of coffee as well. 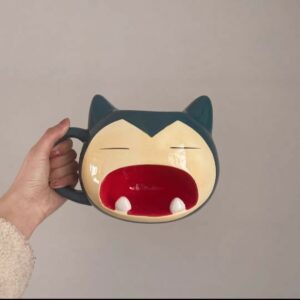 That mug is an official licensed Pokemon product currently on sale in the US at GameStop. For SEA pokefans though the best place to get it would probably be Cheapfinds Online from the Philipines. You can preorder the mug on their Facebook Page.

They are pricing this fine Snorlax mug is priced at 650 Filipino Pesos (RM 54.56) with an additional 150 Pesos (RM 12.59) for air freight. That is relatively cheap for quality Pokemon Merchandise. They are currently accepting a 75 per cent downpayment. You can also PM them for faster replies and therefore faster orders.

Snorlax is supposed to be the Sleeping Pokemon. According to most Pokedex entries, Snorlax basically spends most of its time either sleeping or eating (relatable). It wakes up to eat about 400kg of food a day and then goes back to sleep (also relatable). It can also eat pretty much anything, including mouldy food and even poison.

Snorlax has most recently made a major appearance as a playable Pokemon in the new Moba game Pokemon Unite where’s a pretty good mid-tier defender.

Besides Snorlax, an Espeon Plushie was also recently launched for Build-A-Bear. So much Pokemon merch wherever you turn.