The Witcher – Nightmare of The Wolf Review: Swords, Sorcery and Lots of Gore

Welcome to The World of The Witcher

The Witcher Nightmare of The Wolf is an animated spin-off of the Netflix series, featuring the same writer Beau DeMayo and animated by Studio Mir (Legend of Korra). The show serves as a prequel to the tv show starring Geralt’s mentor, a Witcher named Vesemir (Theo James) who is set to appear in the second season of the live-action series.

I should first be upfront and say that this is the first piece of Witcher media I have experienced. I haven’t read the books, played the games, or watched the series. As such this review will be done from the perspective of someone completely new to the series. I can’t say how much the movie will live up to fans’ expectations but I can say that I thought it was a good introduction to the world of The Witcher and has me thinking about checking out more.

The Origins of a Witcher The Witcher Nightmare of The Wolf follows two simultaneous storylines, the first is the story set in the current day with Vesemir. He is a charismatic Witcher dealing with a kingdom of humans who dislike his kind, disappearing young elves and strange monsters appearing in the forest. The second story takes us back to his childhood to see how he became a witcher in the first place.

I can say that even within the first scene I was intrigued by The Witcher’s world. A young boy singing a haunting tune, before his family is brutally killed by a monster called a leshy. He’s then saved by a Witcher, relaxed and snarky but gets the job done. It presents mystery, dark fantasy, and even a hint of charming humor. It does well to set up the rest of the story.

For people who haven’t watched the series, you’ll be happy to know the film is very self-contained and even explains some of the core concepts for the setting. Vesemir’s childhood provides a good basis of what a Witcher is and the brutal process of becoming one, while the current-day timeline fills us in on how the rest of the world views witchers. They are essentially a group of mercenaries infused with magic, they’re stronger and live far longer than humans and fight primarily to get “coin”. It gives you a good understanding as to why humans fear them yet need to rely on them to kill the many monsters plaguing the land.

The World of Witchers The film in general is centered around this conflict, which gets increasingly more complex and morally grey as the movie plays out. The witchers kill monsters but need monsters to get work. The human characters, particularly Vesemir’s main foil, the sorceress Tetra (Lara Pulver) believe that they are being exploited by the witchers who con them for money. It’s a simple but interesting conflict and leads to a bitter relation between the two sides.

That is until the final act where a lot of this intrigue and mystery is downplayed for more mindless action set pieces. It’s still quite fun but a lot of the more charged plot points brought up earlier are wrapped up too quickly without a satisfying payoff.

I think the most important thing however is that it did leave me wanting more. There’s a lot of intentional unanswered questions here. For example, the characters talk of a previous conflict with the elves. It sounds pretty serious, something that has scarred the one elf character in the film but we’re never told what it truly is. It plants in your head that there is a greater history to this land which makes the world feel more alive and worth learning more about. Perhaps these are answered in the series/game/books leading keen viewers to be looking for more.

The Character of a Witcher The Witcher Nightmare of The Wolf’s hero Vesemir is a good leading man. He is a classic swashbuckling rogue, charming and cool-headed, selfish and self-assured but ultimately with a good heart. Theo James does a good job of showing these different elements of the character. These dimensions are further fleshed out with his appearance as a child becoming a Witcher. He wanted a life of adventure only to find the brutal nature of the witchers and the lack of trust and attachment they face. As we see more of his past, we see his tone and inflections take a more sorrowful and serious tone even underneath all the snark. You can see how the abuse faced by this boy would eventually shape him as a man.

Among the rest of the cast include his love interest Illyana, the sorceress Tetra and the Witcher Deglan who is responsible for Vesemir becoming a witcher himself in the first place. All characters have good personalities and have fun interactions with Vesemir. Illyana is kind and devoted, and it’s interesting seeing her star-crossed love with Vesemir now that he is a witcher and can’t be with her.

The other two had potentials but felt a bit underwhelming. They act as the figureheads for the human and witcher factions however we don’t get to know their personal motivations beyond the general prejudice which makes their character arcs feel unfinished by the end of the film. Tetra in particular acts as a good rival to Vesemir. She’s a powerful mage in her own right and brings up some decent arguments and comebacks to the witcher but it doesn’t really go beyond that. Her lack of more in-depth characterization outside of “witchers bad” stops her from being more memorable. Being a dark fantasy series, The Witcher Nightmare of The Wolf has a pretty distinct identity. I like that world despite being grim and filled with violence is also filled with interesting colors and architecture particularly in the witcher home of Kaer Morhen. I especially like the use of Slavic mythology the series takes influence from as it gives the settings, monsters, and designs a more unique aesthetic compared to other Western fantasy worlds.

Speaking of violence, this film is not for the faint of heart. Characters get mauled and maimed, even kids aren’t spared. With that being said, the film has a good balance with the gore. As common as decapitations are, it never feels excessive and overly indulgent. The monsters and magic on display make the gore-filled deaths feel like something that is plausible in these battles.

The actions scenes are fast-paced and energetic. You can see Studio Mir’s anime influence with a lot of sakuga like battles with characters charging at each other at electric speeds. The animation and sound effects do a good job at conveying the different magic spells and monsters and how each one acts during a fight.

Final Thoughts on The Witcher 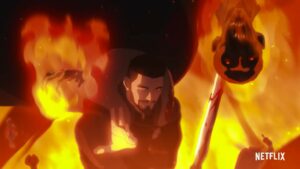 The Witcher Nightmare of The Wolf succeeds in what I believe its main goal is; to get people more interested in the Netflix series before the premiere of the second season. As a newcomer, its’ interesting imagery and actions scenes combined with clear and effective world-building make me feel invested in the plight of its characters and their history. The main character is likable and seeing this world through his eyes makes you more sympathetic to the witchers and their struggles, which gives the viewer an emotional investment in his plight.

It is a shame that it’s the biggest flaw as that I wish it lasted slightly longer to iron out the kinks in its third act. If the third act were able to conclude the film better and fleshed out the side characters a little more, it would have made for a more effective climax. What we have is serviceable if a little too fast and convenient after its more intriguing beginning.

If you’re a fan of the series perhaps you’ll see aspects of the film that I have not and these flaws may not big that big of a deal. With that being said, this movie got me interested in checking out at least the Netflix series so perhaps its’ magic works regardless. If you’re looking for a jumping-on point into this franchise, this could be your gateway.

Did you know that Netflix is going to make another Witcher prequel called ‘The Witcher Blood Origin’ and that Dato Michelle Yeoh will be part of the cast.

The Witcher Nightmare of The Wolf