Starters, Regional Birds, and Pseudo-Legendaries: The Many Archetypes of Pokemon

This article on ‘Starters, Regional Birds, and Pseudo-Legendaries: The Many Archetypes of Pokemon’ was available earlier through the Gamerbraves Newsletter. Sign up for free to gain access to more articles about news and trends in the gaming industry and community.

25 years later and there’s I still believe there are few video game characters as well designed as the Pokemon. With Pokemon Scarlet and Violet about to launch, we’ll have a whole new roster of Pocket Monsters, each beloved in their appearance and bound to be someone’s favorite.

While each generation of Pokemon is creative in its own way, you can see certain design archetypes that reappear in every new generation. That isn’t to say Pokemon is being lazy either. These designs not only look unique from one another but actually play an important role in the design of the games, particularly in the earlier titles. Let’s take a look: 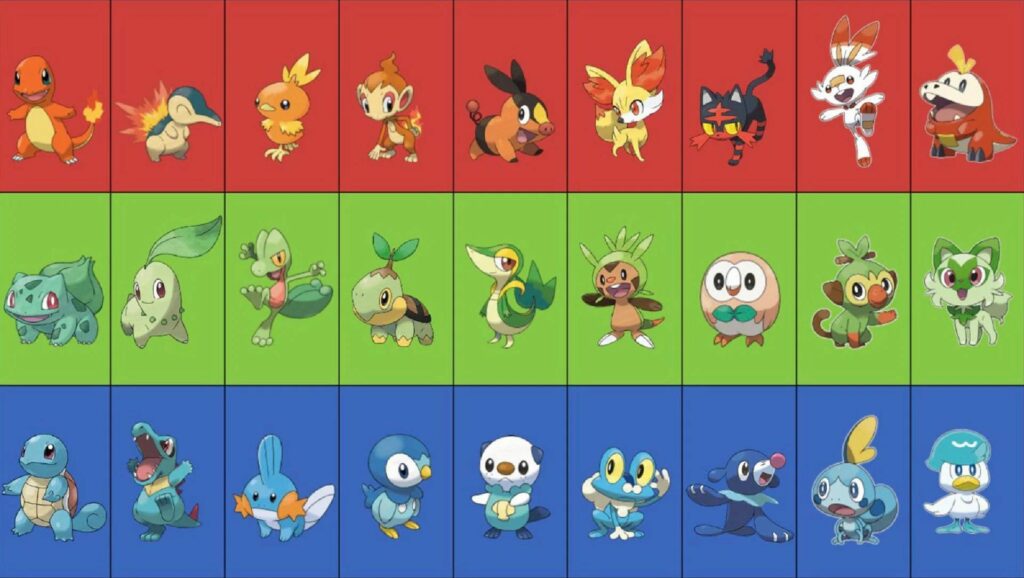 The very first Pokemon you receive in the game, the starter Pokemon are some of the most iconic critters in the franchise. They come in three varieties: Grass, Fire, and Water starting with Bulbasaur, Charmander, and Squirtle all the way back in Gen 1. Other than giving you your first Pokemon, the starters are important because they teach new players the most important aspects of Pokemon: type advantages.

I’ve heard people say that Pokemon should change things up by having different Pokemon types as starters but there is a reason they stick to these three. Anyone, veteran player or not, can instantly understand the simple rock, paper, scissors relationship between the three starter types:

The fact that your rival tends to take the starter strong against yours further demonstrates this idea.

Back in Gen 1, the starters also served an alternative use: they were actually the game’s difficulty modes. When selecting them, Professor Oak remarks that Bulbasaur is “easy to raise” (easy mode), Squirtle was “worth raising” (medium mode), and Charmander “should be raised patiently” (hard mode). Bulbasaur had the type advantage against the first few gyms, while Charmander was weak against them. Later games would make the challenge more balanced between the starters but it was an interesting way of implementing difficulty for Pokemon Red and Blue. When starting your Pokemon journey and stepping into the tall grass for the first time, chances are the first thing you’ll encounter is a cute little normal-type pokemon. Usually a rodent but not always. They tend to be decent in battle but you’ll almost certainly find better Pokemon later on.

The regional mammal plays the part of the scrappy beginner enemies. The goombas of Pokemon. They go back to classic RPG tropes, giving you a mundane, small but somewhat intimidating animal to fight. As the generations went on, they also made for good HM slaves before HMs were eventually phased out. Another Pokemon you’ll probably encounter upon starting up a game is one of these small birds. The regional birds usually evolve into fairly competent fighters (at least for single-player) making them a good choice for a second-party member on your team. They often appear with normal/flying typing but later generations have been more experimental with the typing, leading to powerhouse raptors like Talonflame and Corvoknight.

In the older games, they were also important as they ensured you had easy access to a Pokemon that learned Fly, the quick travel feature of Pokemon. Recent Pokemon games give you a fast travel option outside of Fly, meaning you’re less required to have one of them on your team. Still, when I picked Froakie as my starter in Gen 6, it was nice having Talonflame around the save us from all the scary grass types. The final early route Pokemon you’re going to encounter is the regional bug. What differentiates them from the others however is that in some games, there will actually be two of them: a cuter bug Pokemon (Butterfree archetype) and a more intimidating bug Pokemon (Beedrill archetype). The scarier-looking bugs tend to be part poison type as well, showing the more dangerous side of the insect kingdom.

In the earlier games, the main purpose of these guys seems to be to show how evolution worked. Caterpie, Weedle, and Wurmple would be fully evolved by level 10, going from larva to cacoon to adult arthropod, giving trainers that first glimpse at how pokemon change as they level up. This isn’t always the case though. Not all regional bugs have three stages and some of them do evolve later on with Chargabug, in particular, only evolving at a specific location late game in Sun and Moon. So far we’ve covered Pokemon that you get early in the game but here’s a group you find right near the end of your journey. A Pseudo Legendary is an evolution line of Pokemon that have stats equivalent to that of legendary Pokemon, without being legendary themselves. They’re often reptilian in appearance, usually part dragon-type and there’s a good chance the champion of the region uses one on their team. Every generation has one with the exception of Gen 3 which got 2 (Salamance and Metagross).

The purpose of the pseudo legendary even nowadays, is that of a reward. They’re usually rarer pokemon, found in hard-to-reach areas later in the game (you couldn’t even get a Tyranitar until post-game in Gold and Silver). Upon finding them, they’re often in their first stage and fairly underleveled compared to the rest of your team. Finding and raising the pseudo legendary is meant to be a challenge but for all your effort, you end up with one of the best Pokemon in the game. We don’t know quite what Pokemon Scarlet and Violet have in store for Trainers but it’ll be interesting to see how each of these archetypes appears once again. The benefit of these design trends is that they help players find their bearings. When you see that route 1 bird, you know it’s a good idea to catch it, when you see the big dragon type, you know they’re gonna hit hard. They’re smart design choices that make the Pokemon world easier to navigate.

It’s quite amazing how we’re nearing 1000 different kinds of Pokemon and yet they’re still able to make each new one feel unique and different from previous generations even when they play the same role as previous games. Hopefully the new Pokemon we encounter in the Paldea region will be just as cute, cool, and memorable as the past generation before them.

Pokemon Scarlet and Violet are available for Nintendo Switch.