Hope you like your adventuring, because now you can do it on the go with Space Grunts. The roguelike was previously on Nintendo Switch, but is now available on Android and iOS devices.

Unlike many mobile games, Space Grunts is not free-to-play. Rather, it is a premium title and will cost USD 3.99.

The game has you assume the role of one of several titular Space Grunts. Each one has its own preferences for guns and items, which players will have to keep track of to get a good run going.

One of the most unique features of this game is the way it implements its turn-based feature. Rather than have static turns, the game implements turns by having time only progress when you do. That is to say, if you were to simply mash the move button, you wouldn’t realize it was a turn-based game.

As you encounter more enemies, the game’s codex will update, meaning you’ll have more information with every run. This can give you information on items, as well as the game’s alien enemies. Even if you die, you’ll be a little better off with the game’s tips.

Like many modern roguelikes, Space Grunts features randomized dungeons. This means you’ll have a wildly different experience every time, making it even better for mobile devices. 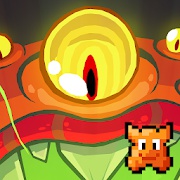 Space Grunts
Publisher: OrangePixel
Developer: OrangePixel
Release Date: 2020-10-06
Android, iOS, Nintendo Switch
Space Grunts combines fast paced arcade action with turn-based gameplay. The year 2476, Earth's space-federation has been building moon-bases across the galaxy. One of those moon-bases has been sending a distress signal. Space Grunts are a group of intergalactic "problem" solvers, sent to investigate.. You play one, out of a team, of Space Grunts, and your mission is simple: find your way into the moon-base, and figure out what has happened. You'll have to fight your way through aliens, robots, security drones and base-systems. Find the lower levels of the moon-base, and get to the core of the problems.
Tags: OrangepixelSpace Grunts
ShareTweetShareSend
Previous Post