Grab your wallet chains and fingerless gloves, as Scarlet Nexus dashes in, oozing anime. After its demo and our preview, the full game is finally out, letting fans take on the story of the OSF as they fight off the threats to New Himuka.

Still, games with an anime aesthetic aren’t exactly known for being 10/10 masterpieces. Will Scarlet Nexus change this? Read on and find out:

I really adore Scarlet Nexus’ setting. For one, it’s daytime-Cyberpunk. In the past year I’d grown so sick of night time neon vistas, it’s great to see how much more tame Scarlet Nexus is in comparison, with its more daytime setting based on Japanese cities. Secondly, we have the Others. These are the bulk of Scarlet Nexus’ enemies, with the most unique designs that serve no purpose othaer than to give Scarlet Nexus its unique charm. My only gripe with the Others designs is that they don’t seem to be created equally, with the flying Others tending to look more generic than some of their counterparts.

Finally, you have the characters themselves. All the main characters in Scarlet Nexus sport a black-and-red color scheme, though purchasing the launch bonus for the game will also give you access to alternate outfits with a more red-heavy approach for them. In general the character designs are pretty solid, save for one pretty important part- main character Yuito. His design is laughably plain, looking like someone just drew over Kirito from Sword Art Online, the posterboy for generic anime protagonists.

Considering how wild the game was willing to go with the Others, it feels weird that they’d limit themselves with such a boring protagonist, but the reality is I’m probably in the minority in thinking that anything Kirito-esque is inherently bad.

Still, presentation-wise, Scarlet Nexus goes hard. Using the game’s SAS systems to share power with your party members gets you these stylish cut-ins, absolutely oozing with personality against all the characters’ designs.

Similarly, using Kasane or Yuito’s psychokinesis is equally stylish, as the more grey environments suddenly light up with bright purple energy. It’s a visual treat, if nothing else.

However, this is all contrasted by the game’s cutscenes, which exist almsot in direct defiance of how good the SAS animations are. The cutscenes follow a Visual Novel-style format, with characters talking through talking portraits in the top of the screen. I don’t really mind this format- Persona handles it well, after all- but the way Scarlet Nexus does it is just so much of a wet fart compared to the rest of the game’s aesthetic.

The character portraits are all presented pretty boringly, in the same generic pose for every character. Meanwhile their expressions are little more than tweaking they eye and mouth shapes, and there’s hardly any variance between the characters. Again, we’re looking at Persona as the gold standard here, and Scarlet Nexus really falls short in this department.

Scarlet Nexus’ story is actually pretty cool, if not your usual anime nonsense. There’s a lot of big turns it takes so I won’t spoil it here, but the game makes use of one decision you make early on- whether to play as either of the two protagonists, Yuito or Kasane. From then on you only witness the game’s plot through the eyes of your character, and that means strictly through their eyes.

As a result, you will miss in-world events based on where your character was at the time, which is a pretty bold move for the game. More importantly as a schism splits apart Yuito and Kasane, you get to see pretty interesting behind-the-scenes stuff for events like bossfights in the other character’s route.

I feel like you really feel the effect in Kasane’s route as well, just because Kasane’s character is written in a more cynical way. For reasons I won’t spoil she essentially spends her story mode on the run, and you see her (albeit terrible) reasons for withholding information from Yuito and his crew. Once you get down to brass tacks, Scarlet Nexus is actually a pretty great action game. The combat feels really fluid, as you balance out your character’s melee attacks with Psychokinetic throws as well as using your SAS system to unlock new strategies by combining powers with your teammates.

The basic combo is pretty simple, wherein you can cancel between melee attacks and throws pretty easily. Melee combos usually end with big openings, letting you charge the throw for the end of it. Meanwhile, you can cancel the recovery of these throws to do rush attacks, getting you back into range to pressure your opponents.

The other thing I really like is with the psychokinetic attacks, you don’t have to be looking at objects to throw them. Prompts will appear on-screen to start charging if there’s an object just off camera, and you’ll never really have to worry about having to scramble around to find something. On top of that there’s also special items, which will give additional effects like applying water or oil to do elemental combos or particularly brutal special attacks.

You also have a system similar to the Stagger in Final Fantasy games, where you’ll be able to do flashy finishers on opponents. It’s neat, especially since Kasane in particular has some brutal finishers, but it doesn’t do much outside of tick checkboxes for your action game. 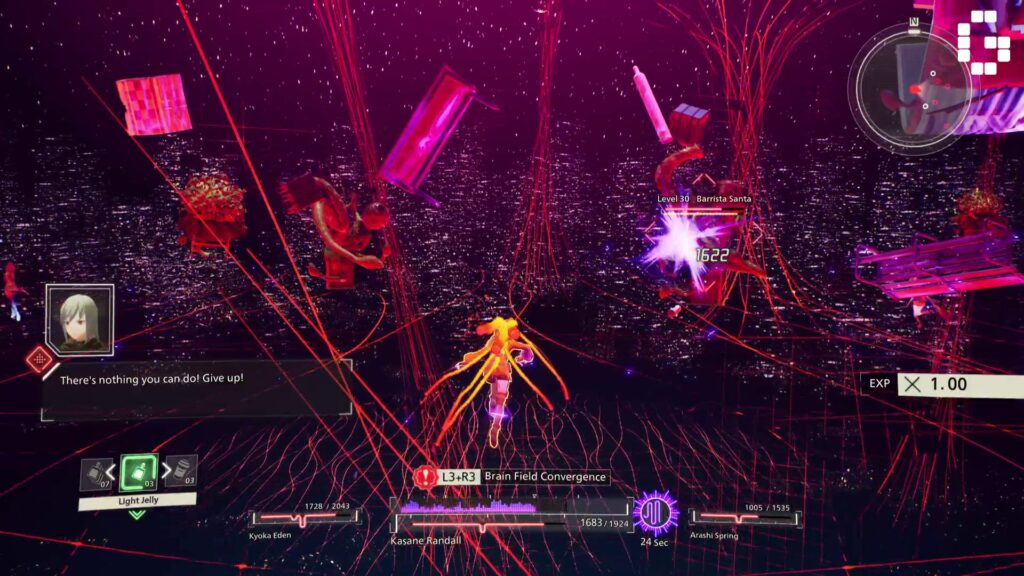 You also have access to two Install skills, Brain Drive an Brain Field. Brain Drive activates automatically, giving you an overall performance boost. Meanwhile Brain Field is a much more significant jump, changing your character’s entire playstyle as you become a telekinetic god of destruction.

I feel like Brain Drive in particular doesn’t do much, especially since you can’t control its activation. Brain Field on the other hand is really good, but runs into the problem of being too paranoid to ever activate it in case you need it later. Some bosses seem almost balanced around the expectation you’ll use it, needing you to do a large burst of damage at once. Admittedly I was skeptical of the SAS system at first, worrying that it would be more of a gimmick than anything else. Each character’s main party tends to have the same pretty balanced spread of SAS abilities, with one elemental member, support members and enemy-specific members.

Briefly, the SAS opens a timer for each character, wherein you will combine your powers with the selected party member.

Thankfully though, the game makes sure that each party member has more uses outside of their main ones. For example Arashi in Kasane’s route uses Hypervelocity, which lets you catch up to teleporting enemies. However it does this by slowing time similar to Ragtime in Devil May Cry V, which you can actually use to either time out enemies by keeping them in the air or extending your combos. 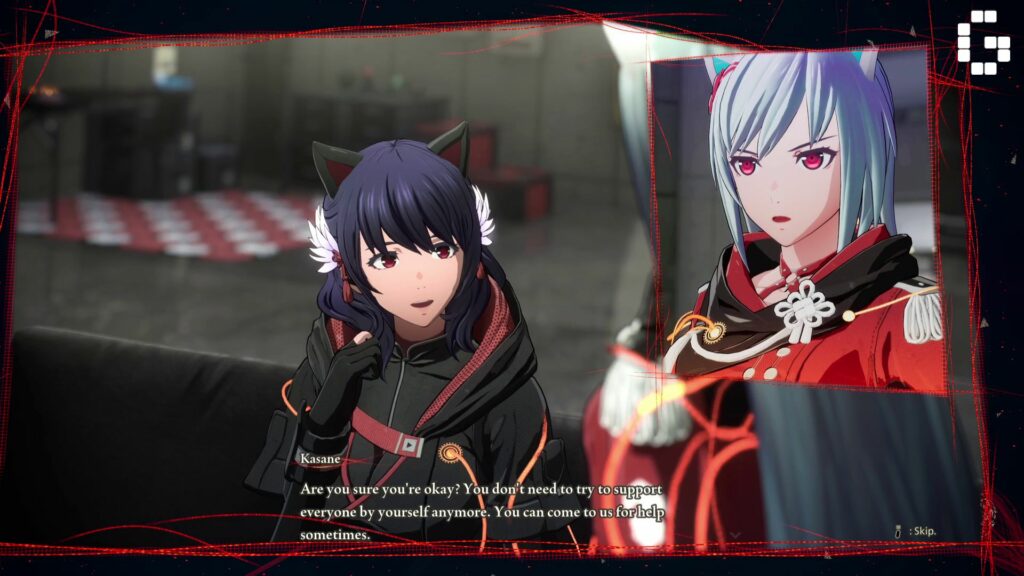 Characters also get bonus abilities if you invest in their Bond System, similar to Persona’s Social Links. These are way more elaborate than just numbers going up though- Shiden, for example, gains the ability to help you create a big electrical disk, and becomes invaluable in all the non-Other bossfights in the game as you smite them with the power of reliable Okizeme.

You’ll also gain some other support abilities, such as characters jumping in to take hits for you, as well as powerful attacks you can spend the SAS meter on in one go instead of draining it over time.

One thing I really appreciate Scarlet Nexus doing though, is that the game gives you time to do your Bond Stories. After each of the game’s chapters you’re treated to a Standby Phase- where time won’t advance until you want it to, and you’re free to either grind or catch up with your party members via their Bond Stories.

I really like this feature, because one of my biggest gripes in Persona was that the game’s strict emphasis on Time Management made it so that choosing between doing the main story and doing Social Links gave me the same anxiety I have in my real life about wasting time. With Scarlet Nexus, you’re told from the get-go that you have enough time to grind these out.

It should be noted that the quality of these Bond Stories is pretty good as well. They’re not exactly the pinnacle of writing, since most of the characters play into their archetypes- but the characters do bounce off each other in a nice way, and some of the early bond stories are laughably lighthearted enough you almost forget that the game’s main plot paints a pretty grim picture. You’ll also have the game’s Brain Map- a tree based upgrade system meant for upgrading your abilities. A lot of the combo potential in the game will come from here, as one of the tree expressly adds new abilities like airdashing, air throws and even longer regular combos.

There’s also a lot of really good abilities you can access in here, such as the ability to passively regenerate health in Brain Drive, or the ability to activate multiple SAS at once. Sadly as you level up some of these abilities will get super pricey, and you will unlock new branches as you get more abilities in the game, so the temptation to hoard skill points is definitely there.

Scarlet Nexus is a pretty solid game, with all of the fixings of a cult classic. Its whole bond-focused approach really scratches my Persona itch, and the gameplay is incredibly solid that it makes for a good time. It’s also got a lot of fun unimportant features, like the ability to dress up your party in cat ears, and having it show up in cutscenes.

Of course, it’s not perfect- like I said, the cutscenes are disappointing and the way the game handles its saves screams JRPG way more than action game. But if you can stomach some discomfort, Scarlet Nexus is definitely a good game to play while you’re locked inside, especially considering Kasumi and Yuito’s routes are 30 hours each.

But anime’s what you want, anime’s what you get with this game, and a lot of it. It’s easy to nitpick what woks and doesn’t work, but the end result is a game that’s just downright fun and stylish, and for anyone looking for that fix, I couldn’t recommend it more. Scarlet Nexus
Publisher: Bandai Namco Entertainment
Developer: Bandai Namco Entertainment
Release Date TBC
PlayStation 4, Steam, Xbox One
Take on the role of Yuito Sumeragi, a new recruit to the OSF aiming to become an elite psionic like the one who saved him as a child. Armed with a talent in psycho-kinesis, explore the futuristic city of New Himuka and uncover the mysteries of a Brain Punk future caught between technology and psychic abilities in SCARLET NEXUS.