It’s very rare nowadays that a laptop just has a feature that screams unique, and even less so that it doesn’t turn out to be a total gimmick. That’s totally the case however with the new ROG Zephyrus Duo 15 SE GX 551, ASUS ROG’s top-of-the line dual-screen laptop that runs the powerful 30 series NVIDIA RTX GPUs.

First unveiled at this year’s CES, this laptop seemingly has it all- top of the line parts, as well as a real stand-out feature to make sure you’ll remember it amidst a sea of laptops slowly adopting the latest RTX graphics cards.

It’s one thing to have all the fancy parts with all the fancy buzzwords, but they don’t mean a thing if the laptop constantly trips over any attempt to be usable. Thankfully, this doesn’t happen with this laptop, but it’s certainly a fear every time a laptop markets itself on a unique feature.

At its RM19,999 price point, it’s a lot to ask. Is the laptop worth its grand price tag? Read on and find out:

A Second Screen For All Occasions

So, one of the biggest features of the Zephyrus Duo 15 SE is its titular second screen. This is a 14.1″ display, complete with touch controls. The laptop treats it as a second monitor, so you can easily drag windows down.

There’s a lot of use here, outside of just gaming. Combined with the touch controls, you could easily use this to throw up a quick guide for your videogame, which you can pause and play with your hands. That being said, sites like YouTube’s browser site aren’t really built for this style of use, so your mileage will vary on this function.

Personally, I find it works much better if you’re not planning on using anything that needs to be interacted with. The shining example would be if you were streaming, since you could just dump chat there and watch as it scrolls by.

It’s got non-gaming uses too, especially if you work in 3D art. If you were using software like Autodesk Maya, for example, you could easily have the second screen act as wither a Viewport or a place to check things like your Hypershade or Graph editor.

Unfortunately, the screen’s weird resolution makes it basically a half-step to having a second monitor, so anything else that requires more frequent interaction is still going to find you better off with just a second monitor. You wouldn’t know the Zephyrus Duo 15 SE was a top of the line gaming laptop by just looking at it. It’s got a fairly humble design, and it’s pretty light to boot. It weighs in at just under 2kg, making it light enough to carry one-handed in a pinch, but I wouldn’t recommend it for extended periods of time because it’s certainly still to the heavier end.

That being said, it sports a 15.6″ 4K screen, capable of running 120 Hz. That’s really impressive considering most devices would take a hit on their framerate when running at 4K, so knowing that its still capable of supporting well-optimized games is a huge plus.

It’s a gorgeous screen, boasting high contrast and colors. Even if you’re not gaming, it’s still a great screen for just watching nature documentaries on Netflix, since all manner of forests and animals are going to look great on the high-caliber main display. That being said, the laptop’s unique second screen does get in the way of its keyboard. The keyboard has been pushed much lower, which can feel weird if you’re used to regular keyboards. The keys also feel slightly more squished together, which will set off some red flags depending on your preferences.

Still, it’s impressive how fully-featured the keyboard is despite the smaller real estate afforded to it. It uses the standard RoG trackpad, which can also double as a NumPad with an easy click.

Like any other piece of gamer tech, the ROG Zephyrus Do 15 SE sports an RGB keyboard, easily programmable via the Asus Armoury Crate app. It’s a neat little feature, letting you add a real personal touch to the laptop.

Suffice to say, it’s a good keyboard- you’d think that having to accomodate the second screen would give the Zephyrus Duo 15 SE more drawbacks, but aside from getting used to it, it really doesn’t. 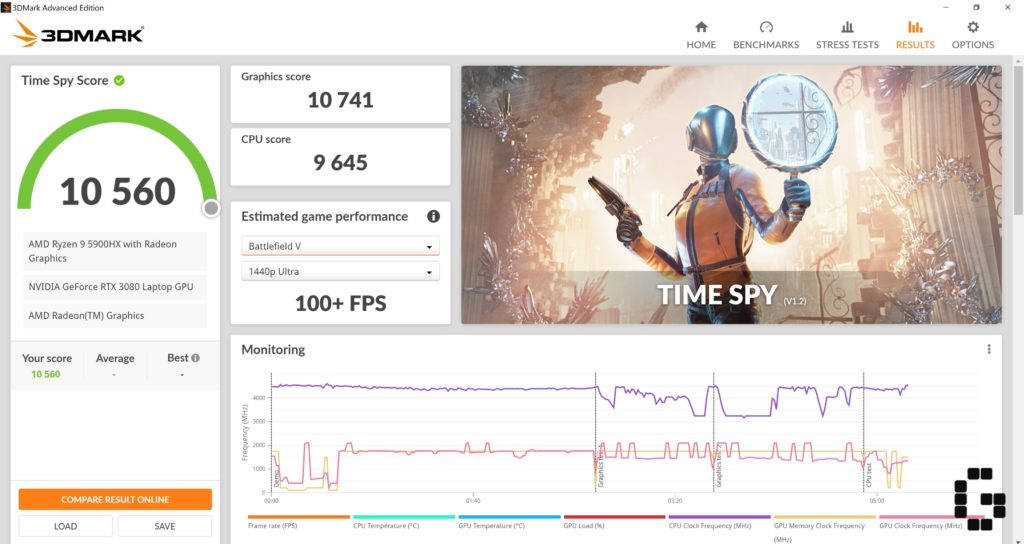 The Zephyrus Duo 15 SE naturally does really well when it comes to gaming, thanks to its NVIDIA Geforce RTX 3080 and AMD Radeon 9 5900HX. It’s literally the top of the line right now, so you really wouldn’t expect much else.

It did really well on TimeSpy’s benchmarking tools, being able to maintain stable framerates for 93% of the test. It’s also able to hit over 100fps on Timespy’s simulations, which you’d expect considering how high spec the laptop’s hardware is.

The problem with having a laptop this high spec is that seeing it do well on these benchmarking tests become less of an “oh my God it’s so cool that it did that” and more of a “yeah, this is what you’d expect”. If nothing else, you can safely know that the Zephyrus Duo 15 SE walks the walk with impressive performance. The laptop runs Warframe really well, even at max settings with its Enhanced mode active. With Warframe there’s really two great places to test your laptop, which is the open world segments and the Defense Missions. Warframe doesn’t really support raytracing yet, but the open-world Plains of Eidolon look great and run flawlessly. Despite the grassy plains and enemies spawning in, I never experienced any slowdowns, and zipping around was quite fun.

Similarly, running the Defense Missions lets you see what happens when the game gets really hectic, showing many objects interacting in a small space. Despite this the Zephyrus Duo still pulled through, never dipping below 57fps.

Better yet, the laptop manages to keep its cool for the most part, thanks in part to the excellent CPU as well as its liquid metal cooling. With liquid metal, there’s less reason to put in a giant fan, which really helps keep the noise down.

Of course, how does it work with actual raytracing? We tried out Watch Dogs: Legion, which gave us some insight to this. Watch Dogs Legion is actually a great game for testing performance, since it has big crowded cities full of puddles for testing out that Ray Tracing, as well as handling lots of objects and screen at the same time. It’s also known for having less-than-stellar optimization, so the golden dream of stable over-60 frame rates is unattainable, so you can always check to see where your laptop falls on it.

In a nutshell, it runs the open world game well, although it struggles with maintaining a 30-frame fps. It has on occasion touched 60 on Ultra settings, but really that’s more of a party trick than a performance report.

That’s not to say it’s the laptop’s fault though, like I said- it’s literally running one of the best CPU/GPU combinations in the market right now. Watch Dogs Legion has a track record of questionable optimization, so the fact that it’s still in the 30 range on Ultra settings says plenty about the kind of tech you’re dealing with here. 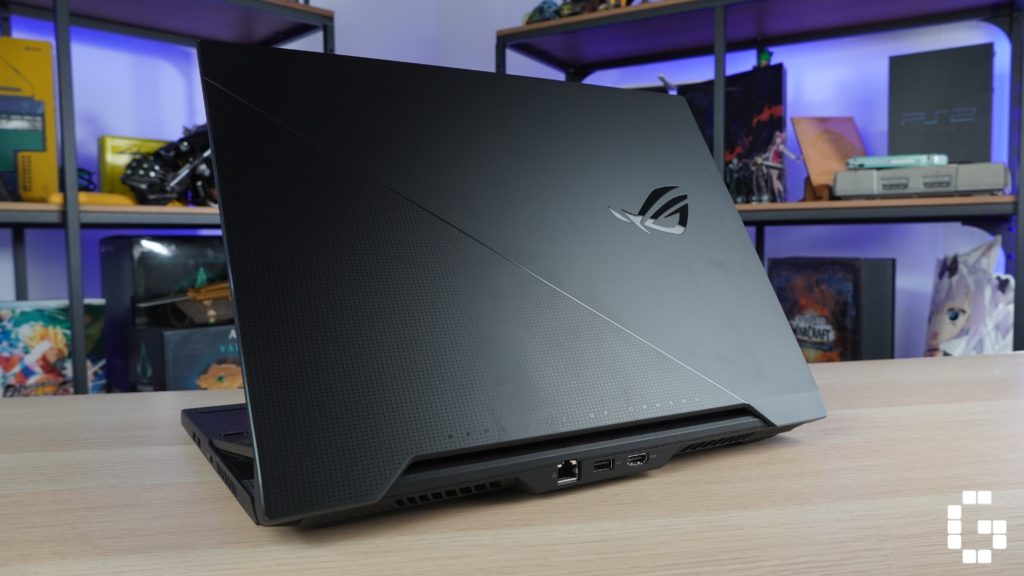 It’s no surprise whenI say the Zephyrus Duo 15 SE might be a contender for one of the best laptops this year. It’s an excellent laptop with top-of the line specs, limited only by the quirkiness of the second screen, and even then you’ll easily get used to it after a week.

There’s also the issue of the laptop’s price, coming in at RM19,999. Considering what you pay for, it’s definitely worth it. The fact that the laptop doesn’t go crazy with bells and whistles really helps the price feel more justified, a big problem with most laptops is that there’s always some big gimmick that makes you feel like it’s artificially pushing up the price. Considering it doesn’t have a giant ROG logo projector out the back, it feels like you’re paying a high price for a high quality laptop.

If you can stomach the hit to your wallet, it’s one to look out for.