If you’re a fighting games enthusiast, Guilty Gear is a series name that shouldn’t be unfamiliar to you. The last game for the series was Guilty Gear Xrd Rev 2 in 2017, available for both the PC and console platforms. ARC SYSTEM WORKS is now at last launching the next game of the franchise in Guilty Gear -Strive-, set for release Autumn 2020. The game had a closed beta on the PS4 the past weekend, which we had to participate in, of course! Let’s rock right into this pretty stylish fighter! As you might expect, many features weren’t available in the closed beta, with a lot of them being “in development”. The networking was available to try though, allowing the choice of many servers from Japan to  Korea, Southeast Asia to USA, and more. Once you’ve picked your server, you can customize your pixel avatar in which you use to wander around the lobby.

Play around with the choices of looks, tops, bottoms, hats, shoes and whatever else you fancy. This pixel art could give a slightly misleading impression to those unfamiliar with Guilty Gear, possibly assuming it to be pixel art throughout which is untrue. Once done, you’ll be taught how to connect with other players to start some matches. It was much easier to find players from the Japanese or US servers, but the connection was pretty unstable at this point. Should you manage to find someone though, you can choose which character you’ll be playing before the fight. Each of them are categorized accordingly to their strengths that include Balance, Speed, Power and Tricky. The beta offered Sol Badguy, Ky Kiske, Chipp Zanuff, May, Potemkin, Axl Low and Faust.

Without checking keys to start off, the initial matches were quite awkward. Once the first mandatory match was done though, we can finally check the commands for every character by entering the Options screen. You’ll need to be ready before you find a new opponent, as in, picking your character first. If you’re going to do randoms or inviting a friend in, you won’t be able to pick once you commit to the match. Movements 100% utilize the controller’s joystick, then you hit the X, Square, Circle or Triangle buttons according to the joystick direction. Some characters will also utilize pressing down on the joystick for combos (special attacks). If you don’t like the preset buttons on the Dualshock, all of them except for the joystick can be customized, so swap them around as you like.

Gatlings is the Guilty Gear series’ system of combos with previous games making it quite important, but Strive does not have the same ‘dependency’ on it, so to speak, which can limit the potentials of your punches and kicks to start the chain and loses some of that smoothness known in the series. Considering it IS a limited time beta, we’d expect more combos to be cooked up in a later beta or once it launches. This Gatling system could be something newbies may find challenging to pick up in the early stages. In regards to character flavour, there’s no shortage of that in the characters’ movesets. May launches her dolphins and waves while striking with her anchor, Faust can utilize bombs or weaponize Afros while Potemkin shows off his WWE moves. 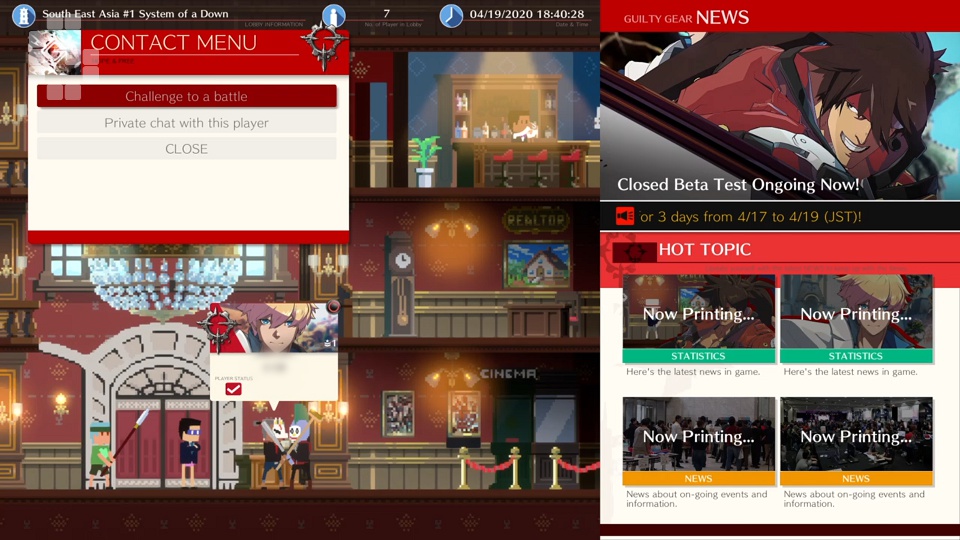 This title definitely has attractive visuals that can appeal to a large variety of players, somewhat following in the style of Xrd’s and Dragon Ball FighterZ’s legacy. With the Unreal Engine 4, the characters have been rendered as such as though they were plucked from an anime. Each stage is quite robust as well, with quite the selection of locales, from a ship to a desert and a forest. These stages will be picked at random in multiplayer.

Of course, one of the most important things would be the attacks, and you won’t be disappointed with the effects given to your strikes for that feeling of impact. It’s not limited to attacks either, with Counters and Defense having their own visuals. It’s a shame that the experience can be soured especially due to random disconnects, but it is what it is, being a closed beta. The multiplayer lobbies are quite cute with a drastic art shift to be rendered in pixels. They didn’t need to render a little bar and various NPCs for functions like the closet to change your avatar, or that lavish lobby you can find the tutorials in, but they did. 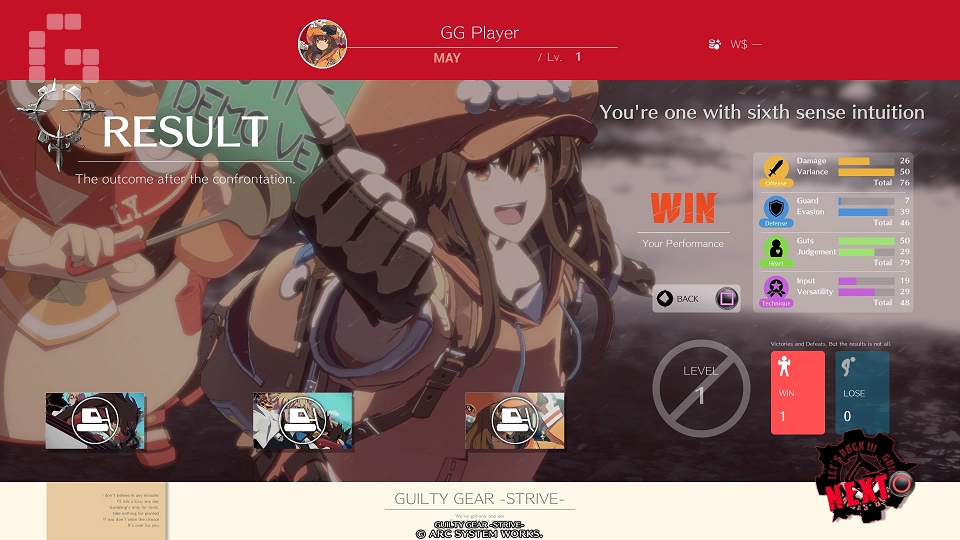 With the Closed Beta, we won’t be able to provide a full review, of course, but you can get a taster of what’s to come in Autumn 2020. ARC SYSTEM WORKS has done a spectacular job so far for Strive, so fans can look forward to this next title! Find it on the Playstation 4 later this year.