Persona 4 Arena Ultimax Review – Reach Out To The True Combo

When you want to review Persona 4 Arena Ultimax, you have to understand that it is a game whose reputation precedes it, massively., A beloved fighting game based on a beloved JRPG, it’s huge in certain corners of the FGC, with a growth limited only by the fact that like other Persona games, it was locked behind the single console it launched on back in the day, the PS3.

That all changed when SEGA announced the game would be getting a modern re-release, with the works: PS4, Nintendo Switch and PC releases mean the game is finally coming into the future, and you’ll be able to run a set virtually anywhere, even a fancy hotel bathroom.

Still, SEGA did as SEGA does and decided for the second time in a row to launch their hotly anticipated re-release without rollback netcode, though it’s scheduled to come via a later update.

The Joy Of Pseudo-Puppet Characters

Netcode aside, Persona 4 Arena Ultimax is a total blast to play. Anime fighters have a reputation for having systems upon systems in them, and Ultimax is no different. Right off the bat, Ultimax has two things any player needs to keep an eye out for- their titular Persona, as well as their Persona meter. Personas essentially turn every character into a pseudo-Puppet archetype, letting you do cool shenanigans by having your Persona move independently from your character to mix up your enemy. However, it comes at a cost- just like Relius Clover or Zato-1 from other games, each Persona can also take damage in the form of their Persona meter. While each Persona has its own number of hits it can tank, depleting the bar triggers a Persona Break, wherein your character will be unable to use any move that involves them.

This is just one of the game’s many features, but I think it really changes things up in a fun way by rewarding a really smart playstyle. Puppet characters are some of the most complicated archetypes in a fighting game, so making each character have their features makes it so a lot of the usually specific considerations for that class suddenly become universal mechanics.

It also works well with the game’s dash macro- rather than just giving your character a burst of forward momentum, the dash macro in Persona 4 Arena Ultimax will cross up opponents at a close enough range- meaning every character now has access to a variety of tools for forcing guessing games on their opponent as they guess let, right, high, low or even if the Persona or its user is going to attack next.

That isn’t even getting into the pseudo-RPG elements that Ultimax sports. Characters can cast a variety of status ailments with some of their attacks, creating some really cool interactions. For example Elizabeth (yes, that Elizabeth) can inflict Fear using her Persona, which just straight up increases incoming damage to its target. Enemies can even eat elemental effects too, such as being frozen in place.

Add that with the game’s Awakening Meter changing things up when you’re low on health, and you realize that Persona 4 Arena Ultimax really wants you to never feel like you’re powerless. There’s always something you can do, though it may require a bit more effort than others. and require a bit of courage on your own part. 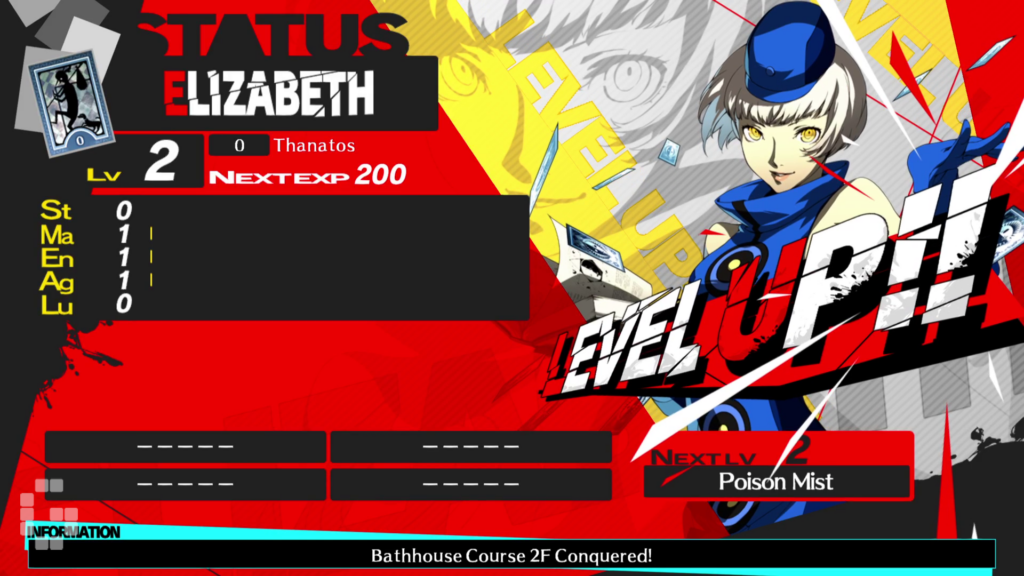 Of course, if you really wanted an RPG there’s also the game’s Golden Arena mode. This is as RPG as RPG gets, as your character and one S-Link build up passive skills and level up through a dungeon of 1-round fights. It’s a fun single player mode, and is sure to be a favorite for people who are bigger fans of Persona than they are fighting game since a lot of these skills can take the heat off a match like your opponent starting out afflicted with a status condition.

Teaching Is Half The Battle

In a nutshell, Ultimax is a game about making many big decisions quickly- if you’re willing to learn it it’s easily one of the best experiences you’re going to have in a fighting game.

This of course, leads to a major gripe I have with the game, in that its tutorial is pretty abysmal. While the content of the tutorial itself is great, the game’s menus are pretty bad. Despite the fact it’s four buttons are labeled A,B,C and D the game neglects to use them- instead using a picture of an arcade setup and labeling the buttons there. The catch? It doesn’t change this layout if you rebind your controls, like say if you had your own fightstick.

It’s such a minor oversight that has such big ramifications- a bunch of the game’s mechanics like your grabs or counters suddenly become harder to look up in-game because you have to remember which of the four buttons are A through D, then remember where you’ve rebinded them on your own device. For a game being rereleased for new audiences this could have easily been the one big fix implemented, yet it seems like they opted to just keep it in.

Thankfully, Persona 4 Arena Ultimax does have plenty of fanservice for fans of the Persona Series, not just 4. While the main focus of the game’s story is the gang of Persona 4 roped into a tournament, they’re far from the only competitors. The game also includes appearances by the Persona 3 gang, all grown up and sporting stylish new clothes.

The cool characters don’t stop there, either- Ultimax even has its own original characters too, such as the other android Labrys and the laughably edgy Sho, complete with a story mode to make any Persona fan happy.

Of course, what I really love is the addition of Shadow Characters- these change up the playstyle of certain characters, removing their Awakening Mechanic and making every character essentially have two playstyles as you choose between normal or Shadow versions. It’s a feature mostly for more pro players, since they’re more likely to care about minor details, but I think features like this are what enables more people to stick to a game- you don’t necessarily lose anything for sticking to vanilla Mitsuru, but more pro players might enjoy the features you get by switching over to Shadow Mitsuru instead. 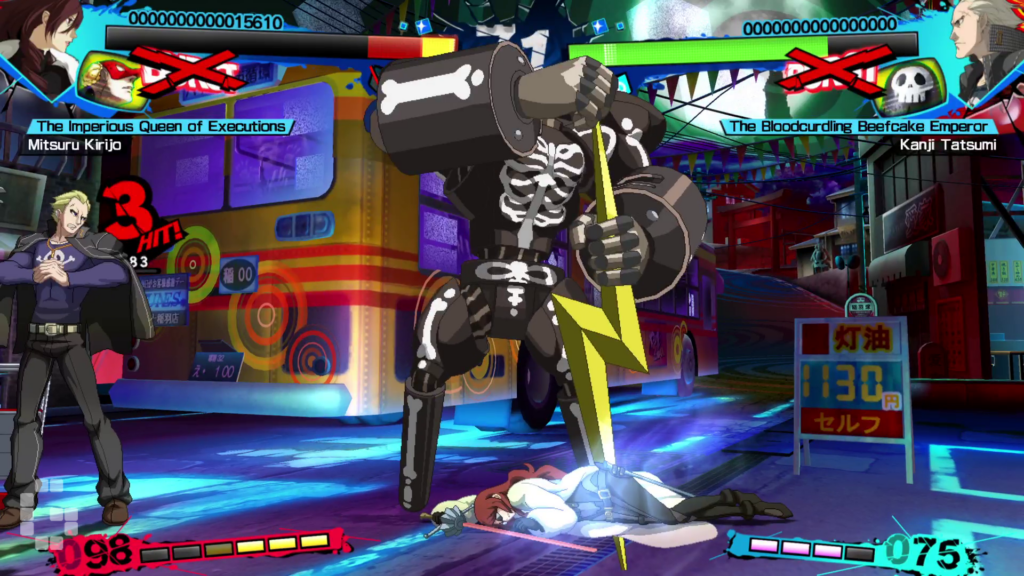 All in all, I’m glad Persona 4 Arena Ultimax has been saved from its PS3 prison with the modern update. While it may not sport anything outwardly huge, like new characters, I think it’s a great game for the anime fighter community because, as I said earlier, it’s a great anime fighter.

That being said, I’m also disappointed that the developers didn’t take the time to add some barebones features that would have inevitably helped in getting more new players in the game. This isn’t just whinging about rollback either- something as simple as having your buttons be read as, well, actual buttons would go a huge way towards making people want to spend more time labbing your game.

Still, if you’re already bought-in on the obtuse fighting game train, this review wants you to know you’ll have an absolute delight with Persona 4 Arena Ultimax. I know I did.