With all the hot takes done and dusted, the Nintendo Switch OLED version has arrived regardless. As its name suggests, the selling point for this “new” model of the extremely popular console is its OLED screen. While the industry and fans at large continue to wonder if there will truly be a “Pro” version released some day, this will make do for now. First thing’s first, let’s get the pricing out of the way. The retail price of the original Nintendo Switch console is USD299, while the OLED version goes for USD349.99, varying according to regional prices. For completion’s sake, the Lite model is priced at USD199.99. In Malaysia, the recommended retail price for the OLED is set at RM1699, while you can typically expect to find the refreshed Nintendo Switch at around ~RM1200 and the Lite at ~RM780.  Below is a table with all the specifications for each Nintendo Switch model at a glance:

I was immediately taken by the really clean white finish for the Nintendo Switch OLED. For aesthetic reasons alone, the few design tweaks might actually be worth the higher asking price. Since it is a white model, I can understand the concerns of it getting dirty easily. For what its worth, it should be fine besides any dust on the buttons or joystick, which you can pretty easily clean off to maintain its pristine condition.

Since I hadn’t originally planned to get an OLED model, I hadn’t paid too much attention to its specs that weren’t significant hardware changes. That was why it surprised me that the OLED version fits just fine in my hard case, despite the bigger screen. More screen real estate is always nice when it comes to portable gaming. The screen itself will be elaborated in a separate section. 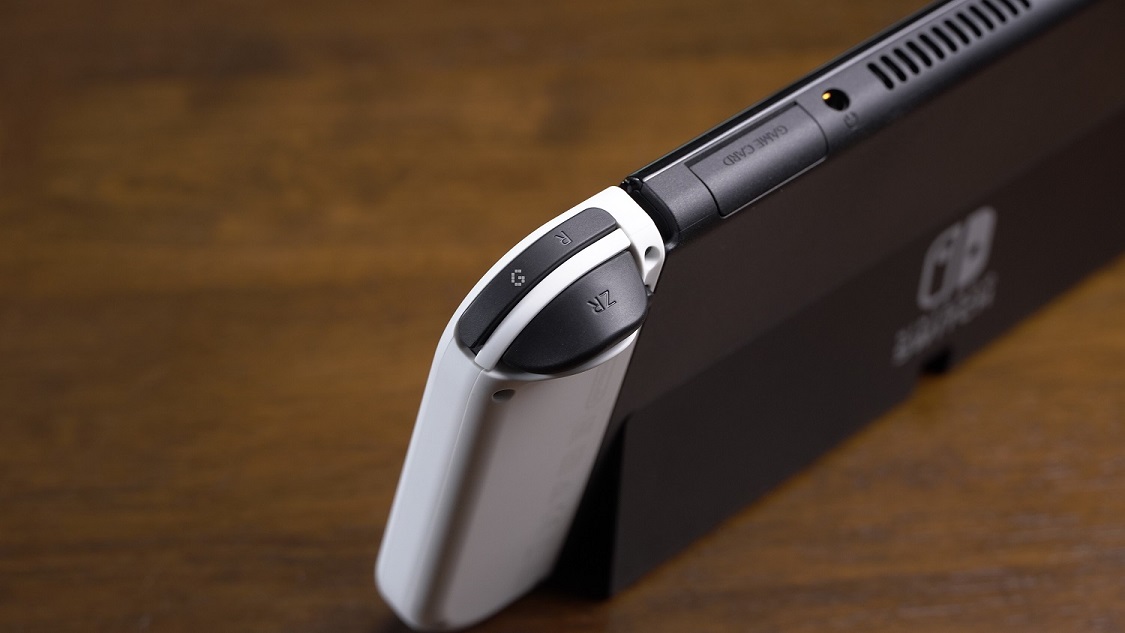 Looking it over, the OLED model’s power and volume buttons have been made bigger. Presumably because it’s brand new, these bigger buttons also feel extra “clicky”. Other minor changes include slight differences in the vent and 3.5mm jack design, and a slightly wider card slot. Flip to the back, and the kickstand now stretches across the console instead of being the flimsy thing the original has, and is definitely way more stable. The microSD card slot has also been moved to the left side of the console (as viewed from the back), rather than being tucked under the stand of the original. The dock’s edges are rounded, with matching white finish of the OLED model. Instead of a hinged lid, the back covering of the dock is now completely removable. If you want to snap it back on, it’s easy, and there’s a slightly more stylish space out of which the wires can snake out. The LAN cable port is on the back as well. For those who wanted the dock solely for this port, it’s compatible with the original Switch if you had any intention of getting it separately. The dock also now has two USB slots to the original’s one, placed on the right side when you view it from the back.

Everything else in the looks department is untouched. The pièce de résistance of the OLED model is the OLED screen. How much difference could a screen possibly make? A lot, as it turns out, when it comes to the visuals. Games look so much more vibrant, they virtually look completely different. Dearly beloved Legend of Mana Remastered looks so stunning, the colourful world popping out as it deserves. The portable gaming experience is absolutely enhanced with the screen.

It’s probably too early to determine how “bad” the “risk of image retention or screen burn-in” is at this stage with the OLED model still being relatively new. According to Nintendo, this issue may arise from “the same image on the OLED screen for extended periods of time”. I’m no expert in this matter, but I would like to think this would be an unlikely occurrence for a vast majority of owners. If you’re concerned, there’s a setting on your console to help with reducing screen burn-in.

While I gush about the quality of the screen when in handheld mode, the docked output remains capped at 1080P. Overall, the model is not the biggest upgrade to the Nintendo Switch line, but it still is quite an attractive model all things considered. As I see it, if you only want to play some games on the console, your cheapest option would be the Lite. For existing owners of a Nintendo Switch, the OLED is likely lower in priority, besides the dock itself. Those who haven’t already gotten a Nintendo Switch and would prefer having the option for docked gameplay, the OLED model is honestly one I can recommend as the best version for a better portable gameplay experience, simply for the visuals.

The rest of us will have more waiting to do for the legendary “Pro” Nintendo Switch.