Netflix made waves yesterday at the AnimeJapan 2022 live stream, showcasing 40 new exclusive anime titles their platform will stream this year from across a range of genres.

Here are the anime exhibited at the show that will be coming out on Netflix in 2022:

Probably the biggest announcement at the live stream. Jojo’s Bizzare Adventure Part 6, Part 2 (episodes 13-24) will be released sometime later this year with more details coming closer to the time. “Florida, U.S.A, 2011 After an accident while on a drive with her sweetheart, Jolyne Cujoh falls into a trap and is sentenced to fifteen years at the state-run maximum-security correctional facility Green Dolphin Street Prison—AKA “the Aquarium.” On the verge of despair, she receives a pendant from her father that causes a mysterious power to awaken inside of her. “There are things in this world that are more terrifying than death, and what’s happening in this prison is definitely one of them.” A message from a mysterious boy who appears before Jolyne, inexplicable events that occur one after another, the horrifying truth told to her by her father when he comes to visit, and the name DIO… Will Jolyne ultimately be set free from this stone ocean they call a prison? The final battle to end the century-long, fateful confrontations between the Joestar family and DIO begins!”

“Selling over 1.5 million copies, Mami Tsumura’s manga Kotaro Lives Alone is Japan’s most heartwarming comedy. Ding-dong! There is a little boy standing at the door.  He hands over a nice box of tissues as a gift and says, “My name is Sato, and I have just moved in to number 203. Pleased to make your acquaintance.” He is Kotaro Sato, and he has moved into Shimizu Apartments to live by himself. He is four years old. He makes his daily shopping trips alone with a toy sword strapped to his side. Both grown-up and childish at the same time, Kotaro starts to affect the people around him with his wise ways. This is the story of a four-year-old boy who is determined to live strong until the day he can live with his parents.”

“Mari Yamazaki’s manga masterpiece Thermae Romae, winner of the Cartoon Grand Prize 2010 and the Short Story Award at the 14th Osamu Tezuka Cultural Prize, is finally being adapted into a Netflix original anime as  Thermae Romae Novae! Mari Yamazaki herself will also be participating in the series as a series composer.

This fantastical bathhouse comedy tells the story of Lucius, a young man struggling as a bathhouse designer in the Roman Empire who somehow ends up time traveling between ancient Rome and present-day Japan and incorporating Japan’s bath culture in the designs of his own Roman thermae.”

Coming out on April 8th “In Sternbild City, people of all races and ethnicities live alongside humans with superhuman abilities called NEXT, who use their NEXT abilities to maintain peace. Heroes wear sponsor logos, help solve crimes and save people in order to improve the image of their companies and acquire hero points. Their activities are broadcast on the popular show “Hero TV,” where the heroes try to climb the annual rankings and aim to be the “King of Heroes.” Kotetsu T. Kaburagi and Barnaby Brooks Jr. continue their hero activities to boost the image of their company, Apollon Media, as well as maintain peace. The hero system that originated in Sternbild City has now been adopted in places around the world. As more and more heroes appear, a new hero enters Sternbild City. Now that they are more veteran heroes, will Kotetsu and Barnaby be able to live up to the expectations put on them?!”

“Released on Netflix in 2019, the anime ULTRAMAN (Based on the works of Tsuburaya Productions, Eiichi Shimizu, and Tomohiro Shimoguchi) became a global hit and received many awards both in Japan and overseas. Season 2 of this series is now set for a global release on April 14, only on Netflix. The series centers on the son of Ultraman, Shinjiro Hayata, and the six heroes (ULTRAMAN, SEVEN, ACE, ZOFFY, JACK, TARO) who carry on the tradition of the legendary 6 Ultra Brothers. Together, they face the schemes of aliens on a cosmic scale.

Kotaro Higashi, a young photographer, encounters a mysterious missing person case. He takes a photo proving that it was the work of aliens and brings it to the SSSP with his girlfriend Izumi. However, a certain incident transforms him into a superhuman with incredible fiery superpowers. Then, a massive cosmic weapon appears before the human-sized Ultraman…”

Coming out on April 28th “The story is set in Tokyo after bubbles that broke the laws of gravity rained down upon the world. Cut off from the outside world, Tokyo has become a playground for a group of young people who have lost their families, acting as a battlefield for parkour team battles as they leap from building to building. Hibiki, a young ace known for his dangerous playstyle, makes a reckless move one day and plummets into the gravity-bending sea. His life is saved by Uta, a girl with mysterious powers who appears suddenly. The pair then hear a unique sound audible only to them. Why did Uta appear before Hibiki? Their encounter leads to a revelation that will change the world.”

You can find more information about Bubble here.

Vampire in The Garden 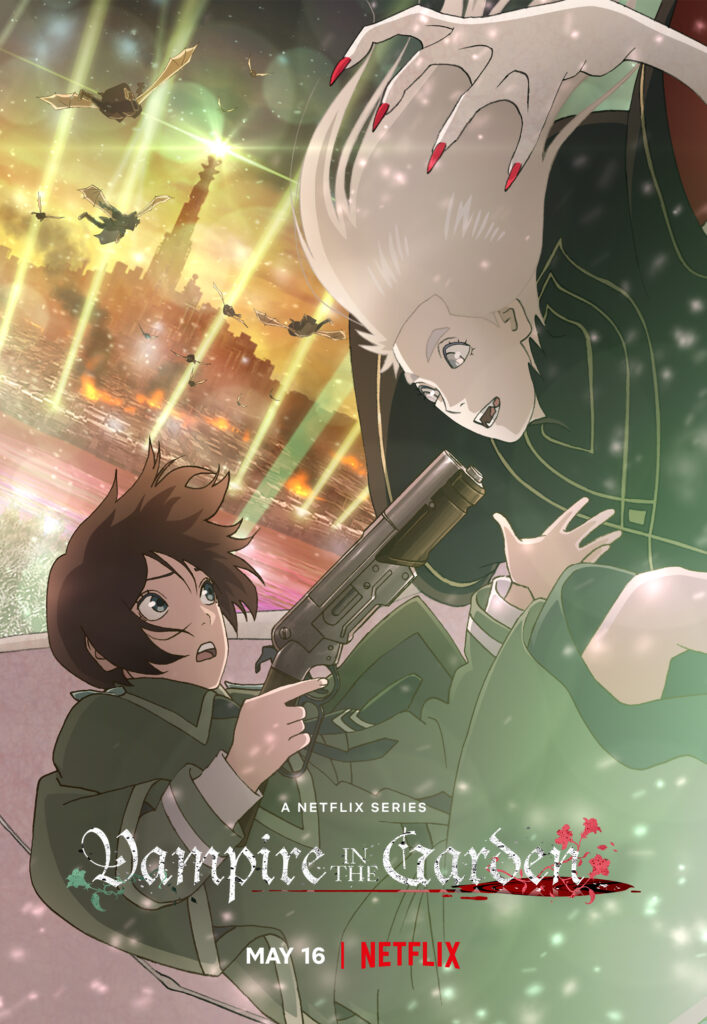 “One cold winter, humanity lost its battle with the vampires, and with it, most of where they called home. A small population of survivors created a wall of light in a small town to protect them and give them a place to live in peace.  The protagonist, Momo, lives a repressed life but still wishes to coexist with the enemy, the vampires. Fine, the vampire queen, once loved humans and disappeared from the battlefield. As war rages through the humans’ town, the two have a fateful encounter. Once upon a time, humans and vampires lived in harmony in a place called Paradise. This is the story of a young girl and a vampire on a journey to find Paradise.”

The legendary manga that took Japan by storm in the 90s is being brought to the screen in a combination of 2D and 3D. Over 30 years on from the manga’s original release, experience a new action-packed adventure that delves into the world of an ancient civilization.” “The anime series Kakegurui is set at the illustrious Hyakkaou Private Academy, where the hierarchy is controlled by gambling. The protagonist Yumeko Jabami and her friend Mary Saotome take on the Hyakkaou student council by gambling against them. This popular title has been adapted into an anime twice before: the TV anime Kakegurui in 2017, and the TV anime Kakegurui xx in 2019, and it has earned passionate fans not only in Japan, but also around the world. Finally, the long-awaited new series Kakegurui Twin is now in the works, with a worldwide release set for August 2022, only on Netflix! This series tells the story of Mary Saotome’s gambling feats one year before Yumeko Jabami transferred to her school.”

The story begins with Mary Saotome, a normal girl, entering the academy. “With over 37 million copies sold and winning in the children’s category of the 39th Kodansha Manga Award, the mega-hit The Seven Deadly Sins (original work: Nakaba Suzuki) is receiving a spin-off anime film. This film will feature an original story by Suzuki. Split into two parts, the story will follow Tristan, the son of The Seven Deadly Sins protagonists Meliodas and Elizabeth. Tristan inherits the power of the Goddess Clan and can heal people’s wounds and injuries, but he often ends up hurting others due to his inability to control his Demon Clan power. To protect his family, Tristan heads to Edinburgh Castle and meets a host of new friends along the way.”

“Following the release of their first feature film Penguin Highway in 2018, Studio Colorido received worldwide praise for A Whisker Away, which was distributed exclusively on Netflix in 2020 and ranked in the top 10 most-watched films in over 30 countries. Now Studio Colorido is releasing their long-awaited third feature-length film, Drifting Home. In this summer adventure, sixth-graders Kosuke, Natsume and their friends enter a large public housing complex, which then begins to drift through the ocean with the children still inside it. With a visual style that takes the audience from reality to a fantasy world, the film features the familiar beautiful animations fans have come to expect of Studio Colorido.”

Netflix is certainly inversting a lot into it’s 2022 anime collection, and unlike Crunchyroll at least their stuff also comes out in SEA as well meaning we can all binge watch Jojo and Kotaro in peace.

Are you thinking of Netlix and chilling with any these when they come out?