My Dress Up Darling really hits its stride in episode 4, fleshing out protagonist Gojou Wakana in a way that really sells the point of the whole show.

If you’re an anime-only, it’s easy to be turned off by the cast of My Dress Up Darling. Admittedly, on the surface it looks like yet another fanservice character and blank slate shy boy meant to sell you scale figures based on over-sexualized versions of otherwise mundane scenes.

You get this especially in Episode 2, where male lead Gojou Wakana spends half the episode freaking out over the mere thought of having a girl in his room, what more one stripping into a swimsuit so he can take her measurements. Without the gift of knowing how good the manga gets down the line, it’s really easy to just put down the anime into the bin of formulaic rom coms. 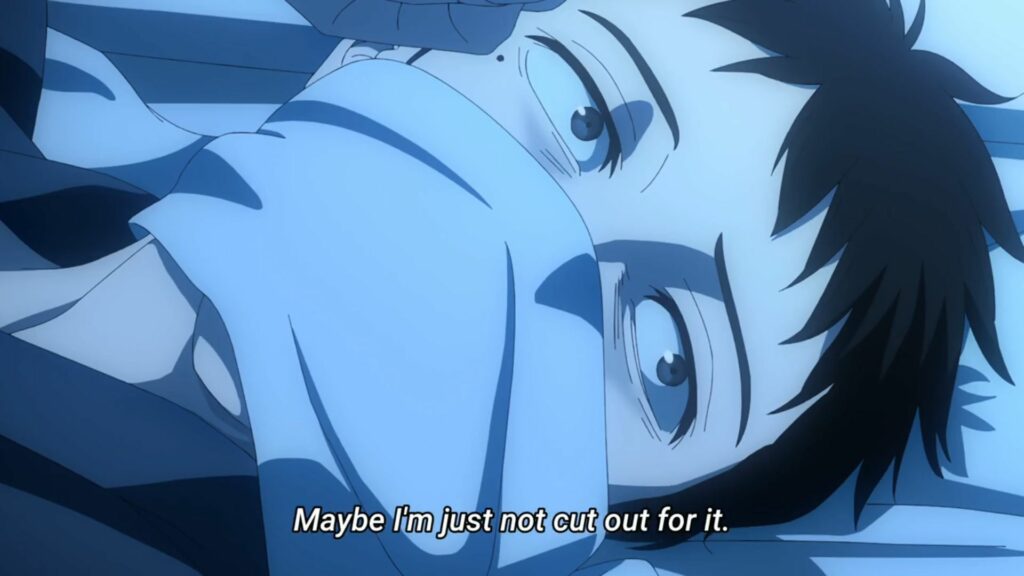 Episode 4 of My Dress Up Darling is where we finally get a glimpse into Gojou’s personality outside of his crush on Marin and his fear of being made fun of for his Hina Doll hobby. In the episode, we see him going through a big period of crunch- he has to run the shop solo because his grandfather fell, he’s got midterms and on top of all that, the last episode ended with him realizing he has to rush out Marin’s costume in two weeks.

At the episode’s climax, Gojou sits at an all-time low, talking about just how hard it is keeping it all together. He brings up something every artist has thought to themselves: that simply liking something doesn’t guarantee you’ll be good at it. He laments not only his own lack of skill, but the fact that it’s directly leading to making Marin unhappy.

He also thinks back to something anyone who’s been to art school has heard- the idea that missing even a day of practice would somehow screw you over in the long run. While the advice came from his grandfather, it’s not presented in the same abusive way many shows about creatives would- the grandfather says this of himself, and Gojou is now beating himself up for not being able to follow his mentor’s regiment. The whole monologue is well worth the watch just for how relatable it is, especially when you remember that at no point is it ever mentioned that Gojou is actually bad at anything he does. By this point you the audience know that he’s entirely just putting himself under pressur, and that all of his low self-esteem has no real basis in reality.

Of course the scene ends on a happy note too, as Gojou flashes back to his conversation with his Grandfather about this exact topic.

“It’s because you love something that you can tough it out when things get rough”, he says.

There’s something great about the whole speech, because it does open up what it’s like doing anything creative nowadays. Social experiences are part of the package now, and even if you’re content making your craft in a vacuum, no one can really deny that knowing it makes other people happy too isn’t going to be a net positive for your own experience.

The whole scene is also a huge boost for Gojou’s character. Like I said, up until this point there wasn’t much to him outside of “shy, scared of girls and likes dolls”. This whole scene is great because while he does mention he doesn’t want to let Marin down, he’s moreseo mad at himself for not being good enough to stop it from happening. In a field full of male protagonists rewarded for being unrepentant garbage, it’s nice to see characters legitimately reflect on their own shortcomings, even if they’re not entirely correct about their self-worth.