Black Mermaid‘s debut title, Moonscars, being a 2D, platforming, side-scrolling “Soulslike” is what I call ambitious. It’s something you can experience starting 28 September 2022, on PS4, PS5, Xbox One, Xbox Series X | S, Nintendo Switch and PC.

As someone who realizes they’re garbage at platformers, and Soulslikes, it’s time to die. There is actually a narrative that won’t be touched on here, just so that you guys will be able to perish repeatedly to see what it’s all about.

For reference, this review was played on PC using a controller.

BETWEEN PAINT AND PIXEL

Moonscars utilizes a blend of this oil painting style, and pixel art. It does make it stand out amongst the sea of “realistic” or “anime-styled” titles out there, and you know what, I dig it. I will admit it was a little disappointing to learn that the oil painting style is reserved for cutscenes, but also I can’t fault it all that much as I enjoy good ol’ pixels too. I know from experience making those are harder than you might initially think.

Besides, this whole dark fantasy, medieval apocalypse aesthetic very much ties into the game’s lore which you will need to find out for yourself.

Moonscars offers a variety of paths to traverse through an area; a necessity when you find “does not open from this side” doors or gates you need to make the long way round for. Of course, this means more areas where enemies can populate and try to annihilate you. Everyone’s favourite bonfire mechanic is the Dark Mirror. The Dark Mirror will allow you to fast travel to your base or another Dark Mirror, let you learn more Witchery or utilize three Rites with their respective effects: Activating any of these Rites require Ichor Glands, a rare resource. Using them all on the Weapon Rite is certainly not recommended (not because of a personal experience or anything).

Interacting with a new Dark Mirror will cast away your “Mould”, which makes you lose your special attack. This “Mould” can be considered sentient, as it won’t disappear and will wait around where you cast it off, and then beat your sorry ass. Prove that you’re the real you to return that attack to you. Speaking of Mould, the Mould Workshop at base will let you exchange stuff for more powerful things.

Killing enough enemies following a single rest at a Dark Mirror increases your Spite level, which then allows you to choose between three Spite bonuses e.g. bonus healing power, reduced Ichor cost, so I can see this being incredibly rewarding for high-skilled players. Dying or resting at a Dark Mirror will reset this bonus. For someone like me, I can try offset this with the Amulet Stone equipment system, which lets me equip different gemstones in three slots for a variety of buffs. Git gud, with help! There is a map with only two levels of zoom. While the map is still legible considering this limitation, I would definitely prefer more options.

To traverse this hostile land, you’ll be able to dash, jump, air dash, jump down, make drop attacks, and the like. I think mastering the art of death from above will be key, since it can stun the enemy. I do find the lack of a double jump a bit strange, but at least you can try shimmying up a wall, bouncing off it to reach higher elevations.

Unsurprisingly, auto-save is not a thing, with the game only saving on interacting with a Dark Mirror.

The foundation of combat is basically normal attack, charged attack by holding down the normal attack button, then the special. Specials naturally have a longer wind-up time for the Big Damage, coming in different flavours. You have the hammer for stuns, the sword for damage over time, and the harpoon for piercing attacks and making enemies more vulnerable to Witchery. Individual weapons also come with different attack timings, depending on whether it’s a faster regular attack, or even lengthier wind-ups. 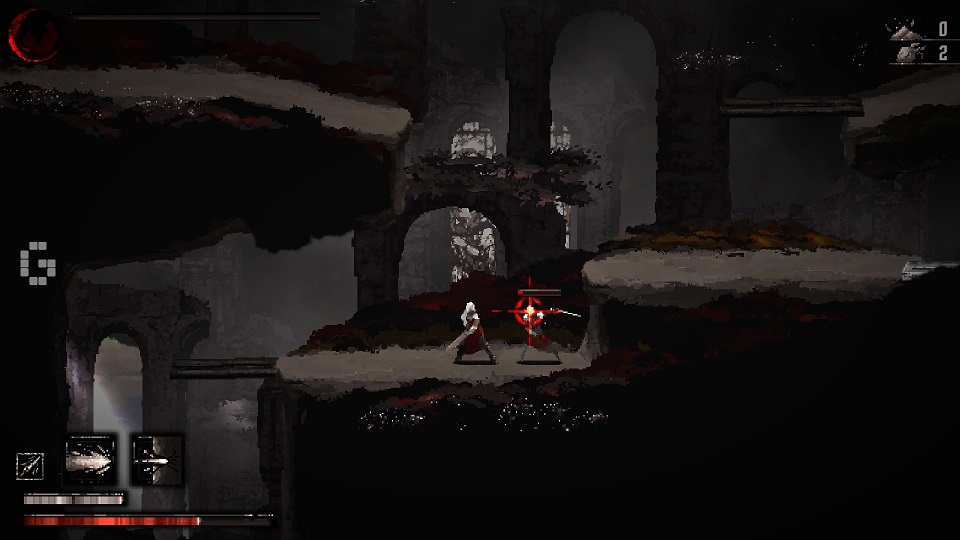 Once you’ve mastered that, it’s time to practice the parries. There’s a visual cue in a red shine when an enemy is about to attack, but this isn’t THE time to counter. Patience, young padawan, before you actually strike true. I understand that this can throw people off a little, to which I think it’s more about getting into the rhythm. Parries are pretty obscene in this game too; able to reduce damage, deals great damage on a successful parry, has knockback, and, most enticingly, grants invincibility. Parry just once within an enemy mob, and you’ll get the opportunity to go to town on them.

Witchery, as you might expect, is akin to magic within Moonscars. There’s quite the expansive skill tree, of which only TWO can be active. Using Witchery requires Ichor (mana), with Ichor also usable to heal yourself. Regenerating Ichor requires you to hit an enemy or refreshing at a Dark Mirror. On one hand, the combat flow of normal and charged attacks to parries and specials feels incredibly good. Being able to gain Ichor from damaging enemies – while slow – still does mean you can be aggressive with your chosen loadout, and heal up if there’s a need for it. However, there are some distinct oddities. Your attacks can stagger enemies, but there doesn’t seem to be a clear visual on a successful stagger. This is especially unwieldy when enemies are giving the visual cue to parry which could be incredibly punishing.

Additionally, there seems to be no collision between you and the enemies. Attacks have momentum, which could place you behind an enemy. Of note, parries cannot be executed from the back. Learning when to stop mashing the button becomes another skill if you were hoping to simply slash and pray through the game. It gives the feeling of trying for an balance between slower and faster-paced combat, with the equilibrium not quite there. Ravenous Moon definitely offers a great challenge, if potentially a touch overtuned for certain enemies.

Moonscars has many things to like for the hungry Soulslike fan. Parry feels obscenely overpowered which leans into the idea that the combat is meant to be slower-paced: timing it right to unleash destruction, though the regular attack chains are still an option, of course.

Admittedly, I don’t typically go for these games. It does offer a great experience on perhaps a smaller scale when compared to something as massive as Elden Ring. The aesthetics will definitely appeal to anyone who’s already in love with Soulslikes, with challenges to sate you. I couldn’t find a proper place to segue into this, but unfortunately, the lack of accessibility options and remapping of controls does turn me off more. The controls are easier to get used to; lack of accommodations a bit less so, personally.

Regardless, will you pick up your sword and march forth? I’ll leave it to you to decide.