Judgment PS5 Review – Did the remaster do justice?

Ryu Ga Gotoku Studio keeps the hype for the Yakuza spinoff series alive by remastering Judgment for the PS5, so here’s our review for it. As a remaster of 2018’s Judgment (Judge Eyes in Japan), expect the game’s content to be pretty much the same, bar graphical and performance differences.

As a result, this review will not be an in-depth look at Judgment for the PS5. Rather, I will merely be highlighting the changes from the PS4 version. If you are keen on learning about the story and gameplay of Judgment, I suggest reading our old review first before proceeding with this PS5 game review.

With that out of the way, it is time to judge Judgment (pun intended)! Judgment is already a rather decent looking game on the PS4, but thanks to the wonders of technology and better hardware, the PS5 version looks noticeably better. I especially enjoy the visual changes on the character models. Granted, they are still the same, but the difference in skin tone, hair and facial expressions really bumped up the realism. Also, lighting effects are a lot more natural on the PS5 version. Not only does this make the characters look better, the environments as a whole are also amazing to look at. Getting lost in Kamurocho a second time around is still a wonderful experience. 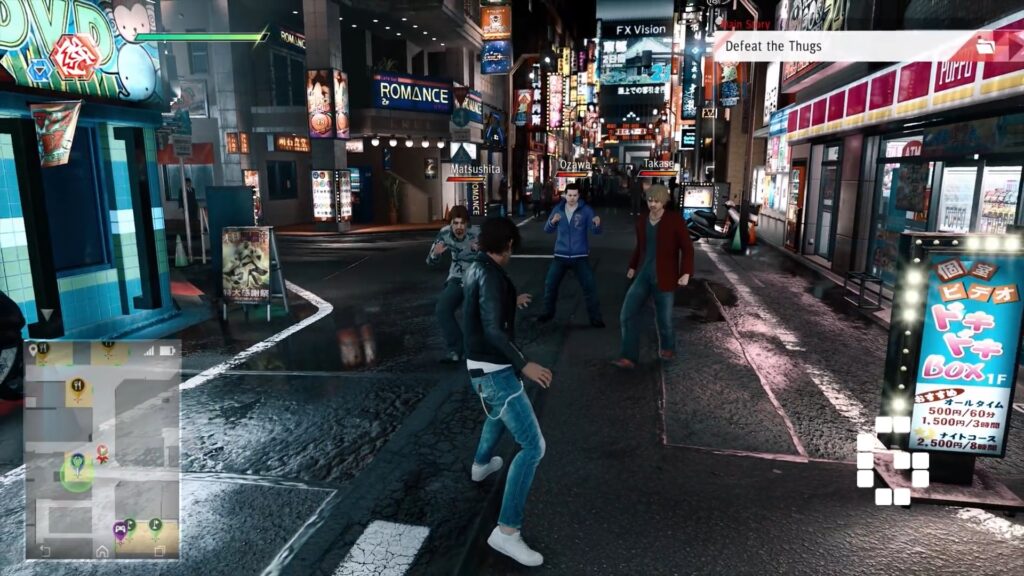 It may look better, but does it run better?

The answer is yes. In fact, the biggest problem I had with the PS4 version was its long loading times. The remaster fixes this issue completely. The PS5’s SSD proves its worth once again, with load times cut from double digits to single seconds, which really makes the gameplay experience smoother. The load times were not the only thing that got smoother. Frame rates also got a boost. The game maintains a steady 60FPS without any noticeably drops whatsoever. Unfortunately, Judgment Remastered does not have any of the game’s DLC. If you wish to get the full Judgment experience, then I highly recommend getting the Digital Deluxe Edition which comes with the “All-In-One Pack” DLC. It includes all the DLC from the original, such as:

If anything, get it for the Girlfriend Present Pack. Trust me, it is worth it. Simping aside, with better graphics and performance, is there anything else to mention? Personally, it is a pet peeve for me that there is no option to transfer my save data from the PS4 version to the PS5 version. As a result, players who have made some progress on their PS4 will need to start from scratch if they want to get the remaster.

As a result, I highly recommend the PS5 remaster if you have never played the original. If you somehow already own the super rare console, then by all means, buy it! Furthermore, with the sequel coming out in September later this year, might as well hop on the Judgment train. However, if you already have the PS4 version and you are fine with it, then I feel you are not missing out on much if you are not getting the remaster. Judgment
Publisher: Sega
Developer: Ryu Ga Gotoku Studio
Release Date: 2018-12-13
PlayStation 4, PlayStation 5, Stadia, Xbox Series X|S
From the team that brought you the critically acclaimed Yakuza series comes Judgment, a gritty tale of disgraced attorney Takayuki Yagami in his quest for redemption. Haunted by his past, he takes up arms as a private detective, clawing his way through Kamurocho’s underground crime network to investigate a string of grisly murders. In this psychological thriller, the balance between justice and mercy teeters on the edge.
Give us some support by subscribing to our Youtube Channel !
Tags: Ryu ga Gotoku StudioSEGA
ShareTweetShareSend
Previous Post