The Greek Gods are in trouble, and it’s up to you to save them. That’s the setup for Immortals: Fenyx Rising, the newest game out of Open-World Connoisseur and publishers Ubisoft. You play as Fenyx, a hero out to stop the newly escaped Typhon by saving the Greek Pantheon.

Generic title aside, the game harkens back to the Zelda-like school of game design, with fun themed areas and a focus on solving puzzles. Despite that, however, it also boasts a large open world set in The Golden Isle. As the third Ubisoft Open-World in 2 months, how does the game square up? Read on and find out: A Charming Sense Of Appeal

I think the best thing Immortals: Fenyx Rising has going for it is its design. Personally, I’m a little burned out with all the “edgy” takes on Greek Mythology, made popular by games like the original God of War and movies like the Clash of the Titans remake.

Instead, Fenyx Rising takes the Hercules approach, with plenty of iconic monsters fairly detached from their original canon. Generic minotaurs and gorgons are cool, and not every game needs to be about how humanity were the real monsters the whole time.

As a result of the game’s more cartoony look, the enemies also have great designs thanks to their unique silhouette. Considering how popular “myth and monsters” is as a genre, the aim here is really just about creating a recognizable design that feels fresh, and I feel like Fenyx succeeds in this metric. There’s also the case of the game’s double-act narrators, Prometheus And Zeus. In our first impressions I compared them to Statler and Waldorf, though aside from being old and never shutting up, there’s not much else to compare there.

Prometheus is the straight man of the two, just telling you the game’s story as best he can. Meanwhile, Zeus tries to interject at every opportunity, with witty comments. As much as I hate constant interjections to keep things funny, the fact that the two of them sound like two old Greek men at a coffee shop telling you a long-winded story when all you wanted to know was where the bus stop was.

The result is a game that feels light, which works to its strengths. The biggest problem with open worlds is the constant feeling of peril getting in the way while you have to pick 5 flowers, and Fenyx’s more lighthearted approach to its story works well in alleviating that stress. Make Your Own Fenyx

This does bring me to one of my big gripes with the game, its store. You can buy your own weapon skins with real money, and although they have no real gameplay effect it does leave a poor taste in the mouth. The game would have been a perfectly fine romp on its own accord, but the idea of a single player game suddenly having paid weapon skins just reminds you that this is the new normal for premium games, and it’s a little exhausting to think about.

Of course, you can always just skip over this tab of the menu, but remember: it’s always there. A Great Winged Leap Of Faith

Immortals: Fenyx Rising is a Zelda-like, with particularly strong cues taken from Breath of The Wild. The whole island is a giant playground, and you are but a set of tools to interact with it as you see fit.

I’ve gotta appreciate the honesty here, since you don’t really talk to any NPCs. After the the NPC-heavy Legion and Valhalla, it’s great to have a game where not every person has a long, tragic backstory.

Instead, your objective is to free the Gods, who have all been imprisoned by Typhon. Each of these Gods has their own zone on the map, with terrain and enemies built around their same themes.

Just like Ubisoft’s other games, you’ll need to get to vantage points to unlock the map, though don’t get too carried away and attempt a leap of faith. These will get you killed if you’re not prepared, since there’s not unassuming haystack waiting for you at the end.

I really enjoy this formula for level design, with all the themed zones. Nowadays a lot of open world games are more focused on having the open world all mesh together, it becomes a timeless slog to navigate through them. With the God-based zones, it’s easier to pace yourself and more importantly, it keeps things interesting. All Along The Golden Isles

Traversal is exceptionally fun with Fenyx, as they have a multitude of tools at their disposal. You can run, climb as well as fly through the lands, though all at the cost of your stamina.

Additionally you can tame various animals to be your mount, so even if you’re in a flat area, it doesn’t mean you won’t be able to still cover good distances.

Naturally, the horse isn’t really recommended outside of travel between zones, since you’re not likely to have that much free space without something of interest to keep an eye out for.

Flying is probably the most fun form of traversal, as Fenyx can also dive to build speed. My one gripe here is that if you run out of stamina Fenyx simply drops out of the sky. I feel like it really breaks the immersion of the game, since you’d expect to lose the use of abilities when you’re out of stamina, and dropping like sack of potatoes really breaks the feeling of momentum. Fenyx And The Temple Of Doom

At the core of Immortals: Fenyx Rising are its Tartarus Vaults, where players will complete puzzles for big rewards. These are where the game hits its peak Zelda- you’ll interact with all manner of laughably intricate traps, like beams and conveniently designed pillars to block them one at a time.

The game is also nice enough to tell you if these dungeons can actually be completed with your current skillset, so you can always come back to them later if you’re missing certain skills.

These can be really fun, since every skill gets their chance to shine in these vaults. They’re also a lot more directed compared to the open world segments, which is great if you’re easily distracted by the vast amount of stuff to do.

As a result some of the abilities feel like they’re exclusively for these challenges, such as Artemis’ Arrow which lets you remotely control an arrow after launching it akin to Arkham City.

One problem though is that they tend to get repetitive over time, and never really feel like they scale up in actual difficulty. While I’m sure the aim was to make them more accessible, the result is that all the dungeons just feel like, well, stuff. It’s just another item on a checklist of things to do. Of course, Fenyx Rising has plenty of combat options as well. Fenyx has several weapons, from a sword, a bow and even a two-handed axe. These make up your typical light-heavy-range options, which work pretty well for what the game is going for.

Surprisingly, the game does go for a bit of depth, with perfect evades and even air combos. Yet it’s never so technical that it gets into character action category. The combat is kind of fine, and it’s clear it wasn’t really meant to be the focus of the game.

You can eventually make the fights more interesting with new Godly abilities, but all in all it leaves a bit of a poor first impression. It’s not too big of a black mark on the game since there’s so much more going on with it but ultimately it’s not a great one, either.

You also have a vast array of potions, which you get more of by collecting various plants in the overworld. These can boost health, attack and even stamina. Despite my gripes, Immortals: Fenyx Rising is a perfectly fine game. Its charming upbeat style is a breath of fresh air, especially compared to the other heavier titles out of of Ubisoft in the recent months.

Speaking of, it should be commended that Ubisoft have just kind of rolled with their reputation for Open Worlds. The game feels distinctly different from both Assassin’s Creed Valhalla and Watch Dogs: Legion, despite fundamentally being about exploring large open areas.

That being said, they’ve also rolled with their reputation for forcing in the same features into every game, such as the pretty blatantly tacked-on store. What was an otherwise solid game suddenly feels very corporate, and its nothing short of a miracle that we aren’t being charged for a Flossing Fenyx emote.

It’s a solid adventure game, and the lack of ever pressuring you with some grand narrative makes it the perfect game to close out the year with thanks to how easy it is to just pick up and play. 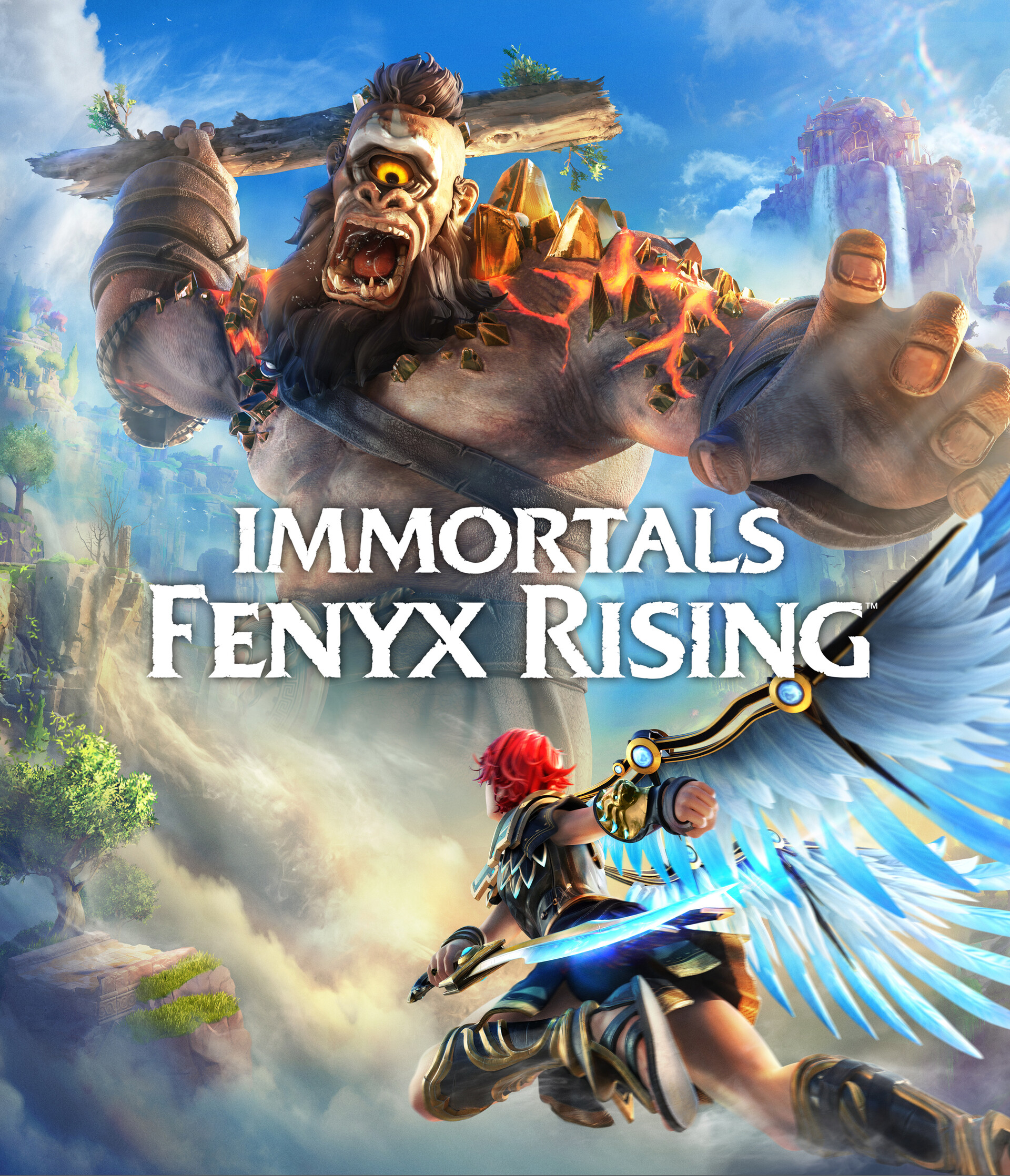 Immortals: Fenyx Rising
Publisher: Ubisoft
Developer: , , , , , , , , , , ,
Release Date: 2020-12-03
Microsoft Windows, Nintendo Switch, PlayStation 4, PlayStation 5, Stadia, Xbox One, Xbox Series X|S
Play as Fenyx, a new winged demigod, on a quest to save the Greek gods and their home from a dark curse. Take on mythological beasts, master the legendary powers of the gods, and defeat Typhon, the deadliest Titan in Greek mythology, in an epic fight for the ages.
Give us some support by subscribing to our Youtube Channel !
Tags: Immortals: Fenyx RisingUbisoft
Previous Post

Chrono Odyssey, a new MMORPG from NPIXEL for console and mobile

Chrono Odyssey, a new MMORPG from NPIXEL for console and mobile