Blizzard’s card game Hearthstone will be getting its newest expansion titled Madness at the Darkmoon Faire which will be coming out on 17th November. 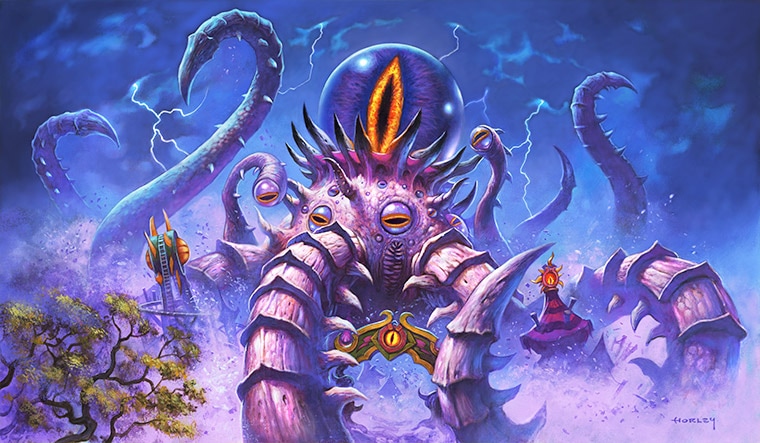 Set among the carnival rides and games, there’s a whiff of ancient corruption as the Old Gods return and have chosen to materialize at the Darkmoon Faire. Madness at the Darkmoon Faire features the return of C’thun, N’Zoth, Yogg-Saron, and Y’Shaarj, the Lovecraft-inspired Old Gods from the World of Warcraft universe, as well as Legendary minions.

Each Old God has a different deck archetype with a potent Battlecry capable of turning the tide of a match. If you dare, you can also toy with the Old God artifacts: four ancient spells with zany effects that act as a throwback to the fearsome earlier designs of the Old Gods.

Hearthstone Madness at the Darkmoon Faire expansion also introduces a new keyword being “Corrupt”. These cards upgrade in your hand after playing a higher cost card. Having a Corrupted version of each card doesn’t just make it stronger, but it also features unique alternative artwork with more eyeballs and tentacles than before.

There’s also a new free game mode coming to Hearthstone with the next update. Hearthstone Duels combines the excitement of PvP Arena mode with the unpredictable deckbuilding from the game’s most beloved Dungeon Runs. Choose a hero, a Hero Power, a signature Treasure, and build a 15-card starter deck from your collection before challenging a series of human opponents to level up your deck.

While the expansion is available for pre-purchasing, the beta for the duels will go live on the 12th November. For more information about the expansion, do check out their official website.