miHoYo has announced a scale figure of Ningguang from Genshin Impact, though full photos of the figure have yet to be shown.

Teased only via a silhouette posted to their website, the closeups reveal the figure is undoubtedly Ningguang, with shots of her distinct dress, pipe and hair color. 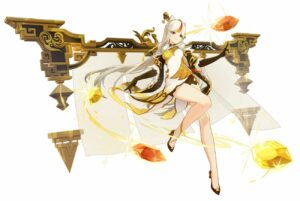 This would make Ningguang the first non-5 star character to get this kind of merchandise, as all the previous characters to get figures such as Klee have all been 5 stars.

The scale figure itself looks pretty elaborate, complete with translucent smoke pieces as well as scenery to make her look like she’s sitting in a diorama. Unfortunately while many of the details can be sussed out, the face sculpt remains unseen for now.

It should be noted that unlike the recent Nendoroid announcement it doesn’t look like this figure will be produced by Good Smile Company, but rather will be likely be by the same people who make the Honkai Impact scale figures.

There’s no word on an official release date, or even a follow-up announcement, but your best bet would be the miHoYo Tmall website once it does come out.

Ningguang is an important character in the second arc of Gesnhin Impact’s story, being the leader of the Qixing of Liyue. She’s also to date the only Geo Catalyst user in the game, and was at a time a highly rated pick for good burst DPS thanks to her skills boosting her own damage.

UPDATED 12 June: Pre-orders will open 16 June, with shipping expected in 2022. The figure will also come with a wall scroll.