In this review, we’re taking a look at Fantasian – the Apple Arcade exclusive by Mistwalker and Final Fantasy creator Hironobu Sakaguchi.

With Fantasian, the team had several challenges- one, how do you make a JRPG that’s appealing to mobile players, since the vast majority of them would be playing on their phones or iPads. And two, how then would you make it so it was a good JRPG in its own right, not “A good JRPG, for a mobile game”.

The game accomplishes both of these through its unique artstyle, clever mechanics and familiar overtones. Does it succeed though? Read through the Fantasian review and find out:

Fantasian is probably one of the most unique-looking JRPGs, sitting up there with Octopath Traveler and Yakuza: Like A Dragon. Fantasian’s backdrops are physical dioramas that the game’s own 3D models are super imposed over, and the game is all the better for it.  The fight scenes are especially nice since they use this Bokeh effect to blur out the background, giving the game a really storybook quality. One thing that should be noted is the character design in this game is laughably familiar. Even though the game isn’t affiliated with Final Fantasy, many of the characters have what I like to call “Final Fantasy-isms”, with Kina straight-up looking like an alternate take on Aerith. The only exception is Leo, who looks like a Nier protagonist instead, down to his more techno-approach against the rest of the world’s fantasy.

Even the game’s UI gives off a very Final Fantasy vibe, and I’m almost expecting the FF8-style pointers at the bottom of every speech bubble. The lack of voice acting certainly doesn’t help either, since it really does just feel like I’m playing a lost Final Fantasy game from the PS1 games, except the graphics look amazing.

The story starts with Leo, who wakes up in the Machine realm having lost his memory. After making friends with some robots and defeating a giant robot, he returns to his home alone and learns that he’s some sort of genius adventurer, making cool gadgets and going on wild adventures. What follows is a pretty basic JRPG plot as he travels the world, slowly collecting friends and party members as they look for a way to stop the Mechteria infestation that’s corrupting the world.

Honestly, it’s a highly generic RPG plot, and I’m not even mad. I think Fantasian’s strength is just how predictable it is, because that’s the best way to see all the new stuff. Not every JRPG has to push the boundaries of storytelling, and Fantasian’s is actually a pretty fun romp if you don’t think about the world succumbing to a robot virus.

Plotting Your Next Move, Quite Literally 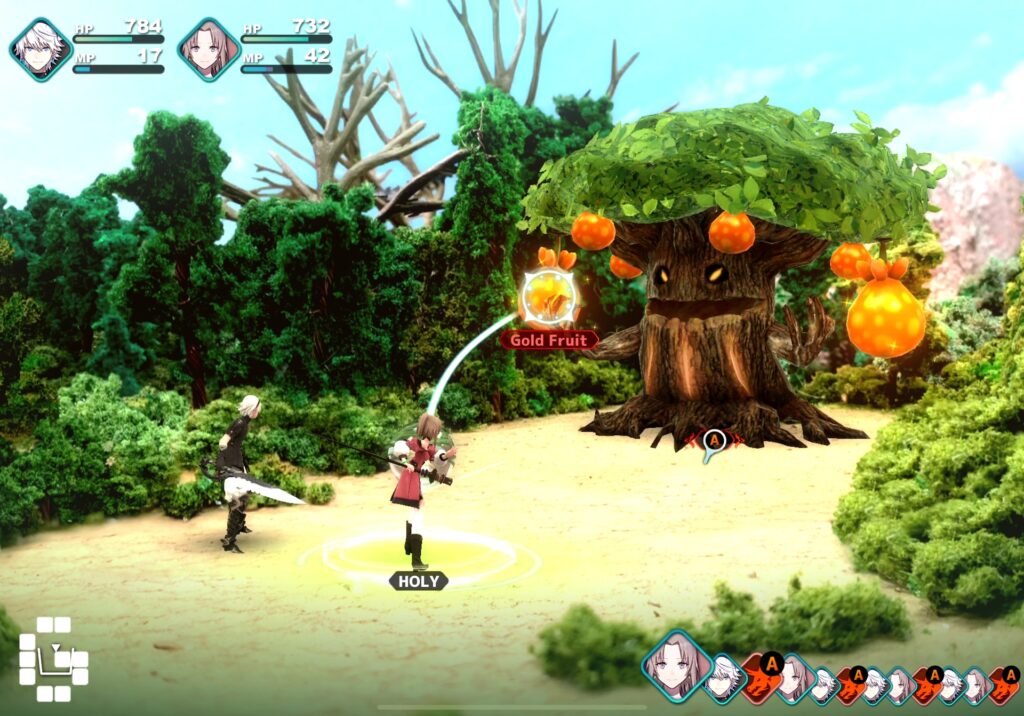 Suffice to say, Fantasian definitely feels like a Final Fantasy game. It’s got the works- a turn order chart telling you how everyone’s going to attack, characters with suspiciously familiar archetypes, as well as a 3-man party system. That being said, while the base of the combat is steeped in Final Fantasy, the comparisons end there.

While a lot of turn based RPGs have tried to bring the experience closer to real time a la Yakuza 7 or Final Fantasy 7 Remake, Fantasian fully embraces its turn-based nature while looking towards a different genre- tactics games. Rather than have enemies stand in a row like usual, Fantasian’s mobs tend to be scattered in weird patterns.

This is because a huge part of Fantasian is its arc-based combat. Moves can either hit in a straight line, along a curve or in an AOE. Ideally, you want your moves to be hitting the maximum amount of targets, which adds a great layer of strategy to the combat.

It gets even better when the game introduces some enemy configurations built around exploiting this system. Multiple times in the game, you’ll be presented with an encounter consisting of one huge enemy blocking access to smaller enemies behind it. It’s really clever, and built around the idea that you can’t arrange your own party to get around it.

The one downside with this system is that the game’s camera doesn’t always get the memo. Bossfights in particular can sometimes like to use low angle cameras, which can make things like setting up curves a lot harder since you physically can’t see the curve you’re plotting it on.

Controlling Your Encounters With Dimengeon

The other really clever thing that Fantasian does is with its encounters. Random encounters are a divisive staple of classic JRPGs, with many finding the system obtrusive since even the simple act of going to the next screen can trigger encounters. Games like Bravely Default tried toying with the ability to let you set random encounter rates to 0, while Pokemon made them less random by having some appear in the overworld.

The problem with setting your own encounter rate, however, is that turning them off for convenience makes for weaker characters. Not every person is going to realize this, and may stroll into the next boss only to get steamrolled.

How Fantasian gets around this is with its Dimengeon system. Simply put, the Dimengeon lets you put away any random encounters you’ve fought before into a box. The box has finite space, however, capping out at about 30 before you get any upgrades for it. It’s also important to note this isn’t 30 encounters, but rather 30 monsters in total. So considering how some encounters can have 5 monsters, be prepared to have the Dimengeon fill up pretty quickly if you’re not careful. At any point, you can open up the Dimengeon and fight all your encounters at once. In my opinion, this is peak Fantasian since you’re fighting up to 30 enemies at once, and you’ll have to make sure your attacks are all hitting their arcs accordingly. There’s also gimmicks in the Dimengeon stage, letting you hit extra objects in the arena for buffs like extra turns and damage boosts.

The best bit is this is also a great way to do your grinding, since one medium-length fight that’s worth a lot of XP is way better than many short fights that give barely any. It solves a lot of JRPG problems without flipping the genre into something new, and I think the game absolutely deserves to be commended for it.

It’s A Party In The Fantasy One thing of note in this Fantasian review is that Fantasian definitely falls more to the side of the story-based JRPG rather than the more build-oriented ones. Upgrades are pretty linear, and characters are pretty much restricted to their jobs. Leo kind of suffers the most from this especially in the early game, since he plays like an archetypal Thief. The early game especially has enemies that aren’t weak to his only elemental spell (fire) and once you get Cheryl he’s outclassed in physical damage.

Worse still, his attacks all hit in a straight line, meaning the wall-gimmick-enemies are literally built to counter him. A good chunk of my game was spent with the important fights seeing Leo just chucking powerups at his party members, building them up instead since they’re all much better at killing things.

Still, the other characters are really interesting, such as Kina who’s basically a white mage. The early game puts a laughably high level of importance on her, with almost every enemy being weak to her holy magic, and her starting out with cure magic, too. Cheryl’s another really solid early game pick, because her unique gimmick is that her auto attack hits from above, letting her bypass walls by summoning ghostly dragoons to get the drop on you.

Their upgrades are also pretty linear, which can be a downside to anyone hoping for something like FF7’s Materia system or Bravely Default’s Subclasses. Admittedly it can be a bit of a turn-off to know there’s no hidden exploits, but it’s also great for the more casual gamer who doesn’t have to worry that they’re playing sub-optimally because they haven’t figured out how to counter every hit with 4 casts of the same spell. Fantasian is a pretty great JRPG, strengthened even more by the fact that it’s playable on the go thanks to Apple Arcade. It’s got enough going for it to put it on par with a lot of classic JRPGs, and enough innovative systems that I really hope more games adopt in future.

The arc-based combat is particularly great, since it gives a breath of fresh air to the turn-based JRPG combat without having to dilute it’s turn-based-ness. It also works really well with the game’s Dimengeon, which makes it so you can grind at your convenience, and much more efficiently.

Still, it’s not immune to its gripes, especially with how often the game railroads you. It’s important for the experience the game wants you to have, but with how big the genre has gotten and how much of that is built around openness, newer players might find it a bit of a shock.

All in all though, it’s definitely a game to get into if you’re curious about JRPGs, but are scared of trying one of the older ones like Final Fantasy 8, which is also available on mobile. The current release is only Part 1 of the story, with Part 2 coming later this year.

Fantasian
Developer: Mistwalker
Release Date: 2021-04-02
iOS
Fantasian by Mistwalker Corp. — From the creator of Final Fantasy, comes the next breathtaking adventure from industry legend Hironobu Sakaguchi. Fantasian is an exciting, new RPG set against a spectacular backdrop made from over 150 handmade dioramas that blends physical environments and 3D characters.