Everyone Loves Gym Leader Larry In Pokemon Scarlet And Violet

Just a normal guy with his normal pokemon

It’s funny how the designs of the human characters in Pokemon have become almost as iconic as the Pokemon themselves. Every new Pokemon game introduces new characters that are destined to become fan favorites and Scarlet and Violet seem to have found theirs. This comes in the form of the normal type pokemon gym leader, Larry.

Larry is the gym leader of Medali Gym in the Paldea Region. He’s a tired and overworked saLarry man (hehe get it) who barely seems like he wants to be here but is too polite to let you know. After you complete the Gym Challenge in a traditional Japanese restaurant, the waiter calls him up. It turns out he was one of the NPCs eating at the counter, blending in perfectly with the background characters. He slowly drifts over to you with all the enthusiasm of an accountant being dragged into doing overtime. 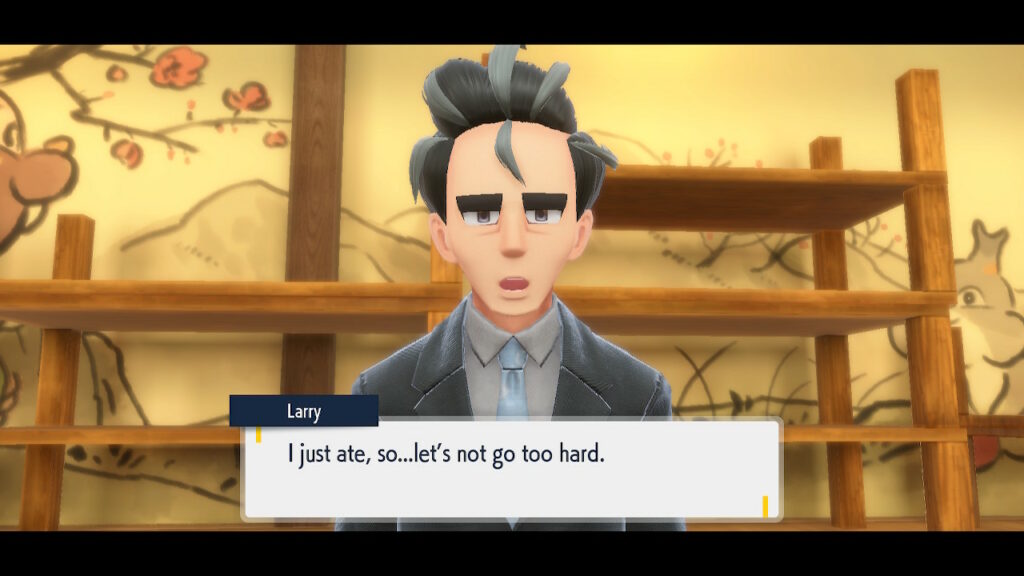 During the match itself, Larry fends pretty well but we can’t go without mentioning his team includes one of the best Pokemon of Generation 9: Dundunsparce. This is the long-awaited evolution of Dunsparce which turned out to look exactly the same as its previous evolution but slightly bigger. Complete with the same generic normal typing. It’s almost poetic how perfect they are for each other.

It gets even better though. As you take on the Pokemon League, you get to the third Elite 4 member, and guess who it is! Larry casually mentions that his boss asked him to switch up his team a little so he’s using flying types now. Many have pointed out that the joke about him having normal and flying types is that normal/flying is one of the most common type combinations in the game. Almost all of the regional bird pokemon feature these two types, making it really nothing special. 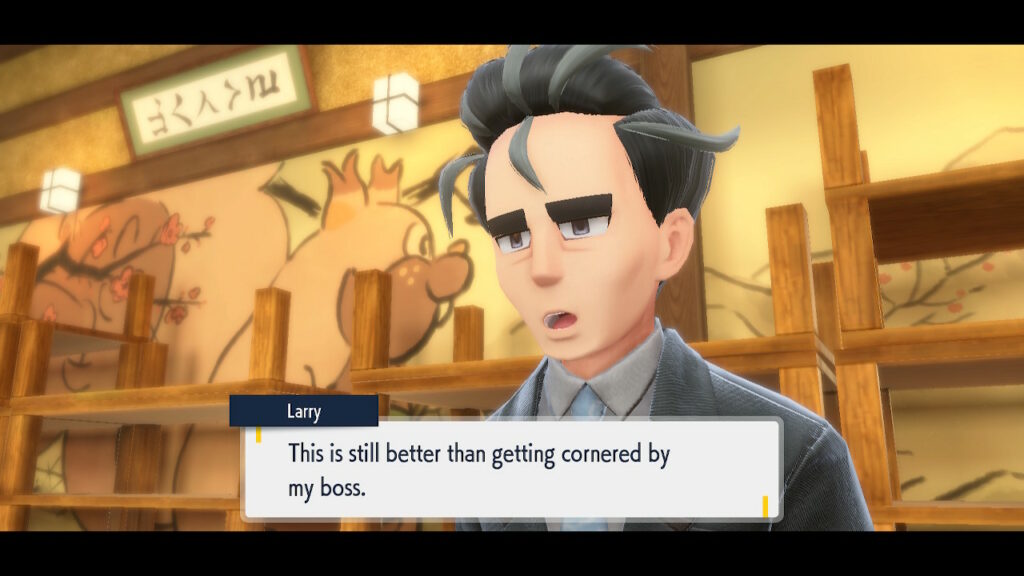 The best part is that this isn’t even his full-time job. Larry works an office job for the Pokemon league and just happens to act as the gym leader/Elite 4 members part-time when his boss needs someone to step in. He’s highly relatable to many adult Pokemon fans that have now grown up to work their own crummy office jobs. In a game filled with over-the-top costumed gym leaders with supermodel-level looks, the normal type leader stands out for being, well, completely normal. Just your average, run-of-the-mill Larry.

Larry has quickly picked up a following over social media. Many love his stock image businessman look, complete with the faint vibes of internalized depression that just makes him more likable and lovable.

“Hi, my name is Larry. I run the Normal-type in gym in the Paldea region, and I have a day job at the Pokémon League office. I love eating and drinking coffee during my 7AM commute.” pic.twitter.com/1hZ3N6NyNx

larry is the best character they’ve added in a pokemon game in the past 15 years https://t.co/3Lhmw2ZGCQ

I just want to say that Larry is the best gym leader in any Pokemon game period. pic.twitter.com/8efl6FTER4

For all the faults people have with Pokemon Scarlet and Violet, at least we can all agree that Larry is a pretty cool dude.