We had previously reported on Evangelion’s entry into the mobile market with EVA Battlefields, which now has a confirmed release date. According to appmedia, the game will be launching on 26 March. The website also has a countdown timer that you can watch.

EVA Battlefields is dubbed as a “cinematic 3D battle game”. Let’s take a look at the screenshots that appmedia has shared: 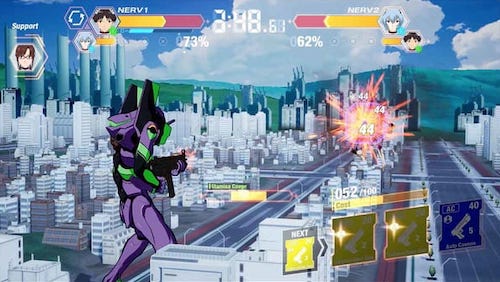 It would seem that there will be online functionality where you can battle other players in your EVA of choice. Additionally, there is a curious point where they apparently intend to link the game to real life EVA figures, and utilize them as “controllers” like how you would use a PC mouse, for example. They will have ID chips to store data. This sounds much like Nintendo’s amiibos.

The game will be following the storyline of the theatrical release, but will also introduce original characters. It will be a free to play game with in-game purchases, presumably in addition to the real life figures. One presumes that a battle pass system would likely be implemented into the game as well. With the integration of amiibo-likes, it’s curious to see how overseas players may want to collect them. In any case, we’ll find out how it works on EVA Battlefields release date on 26 March.

You can check out their store pages with the relevant OS with the button below.

Granblue Fantasy: Versus Who's Who Part 3: DLC Character Pack 1

Castlevania: Symphony of the Night now available on mobile

Castlevania: Symphony of the Night now available on mobile