Doraemon Story of Seasons: Friends of the Great Kingdom Review – The Friends We Make Illuminate Our Path Home

The game visually plays out the same as the original while also bringing fresh new mechanics to the game. There are a couple of flaws to the game but they are mostly nitpicks and they do not dampen the peaceful and fun farming life in Illuma.

THE STORY THAT BRINGS US TOGETHER

To give a brief summary of how the story plays out, Noby, Doraemon and friends crash landed on another planet called Illuma where they meet a young boy named Lumi living on a run-down farm. With no way to return as of the moment, Lumi invites them to stay at his farm as long as they help out with the farm work. Drama ensues when the ship they came in with was taken by the Queen of the planet who was also in fact, Lumi’s mother. As expected, the Queen was sceptical of outsiders coming into her world and barred the ship from Noby and friends.

So, in order to get their ship back, they would have to prove their worth to the Queen by improving the farm and building the town up.

One thing to note is that throughout the game, the whole gang is named after their English dub. There is nothing wrong with it per say, but having grown up listening to their Japanese names, hearing Nobita being called Noby and Shizuka being Sue is kind of jarring.

The core gameplay of the game plays out just as much as you would expect from a Story of Seasons game.

You spend a majority of your time cultivating your farm and use your spare time to interact with the locals to build your bond with them.

The game plays out like your average Story of Seasons, with the addition of Doraemon to it. You have all these varieties of tools to help you, from the hoe to till the ground, a hammer to smash rocks, an axe to chop down trees and a watering can to water the plants. You can get all sorts of seasonal seeds for crops and flowers from the General shop and we are free to choose what crops we want to grow, so long as they are within the right season. Once planted, it is our responsibility to care for them as they grow across the days.

Once they have fully grown, we can harvest and sell them to earn money which will help in our endeavour to improve our farm.

Aside from plants, we can also raise livestock including chickens, cows, sheep, horses as well as alpacas and I must say, the alpacas are criminals for being so cute. Much like our plants, these livestock also need proper care and they would require food which we can get either by purchasing it or even growing it ourselves. At times, we also need to take them outside of their shed on sunny days to keep them healthy.

While they did replicate the best of the Story of Seasons, they also did the same for its flaws.

Cultivating the farm can be a tedious and repetitive process and while that is the core problem for every farming game, Doraemon has no Quality-of-Life upgrades to patch that up.

Taking the animals outside to keep them healthy would also mean we would have to bring them back inside, especially during the rainy days and you would have to do this manually. With how the controls are, moving the cows can be quite difficult and having to do it repetitively rapidly changes it from being tolerable to just downright annoying.

There is also the matter of harvesting the crops and picking up other items in the farm. In the early games, the issue is not that prominent but when you have a bigger farm and you have to harvest the plants one by one, it can be VERY time-consuming.

TWO BRAINS ARE BETTER ONE

One of the most fantastic features in this game is the ability to have an offline multiplayer mode. Using two controllers, one will be controlling Noby while the other, Doraemon.

Assuming your partner is busy or you just want to experience co-op as a single player, you can also opt to have one of Noby’s other friends to accompany you instead. The AI that controls your friend is just so amazing that I find myself playing with a companion every single day.

They will basically mirror every action you take in the game. If I choose to water the plants, they will water the plants as well. Going down the river and fish? They too will fish with you. What if I head to the mines for some mining? Your AI partner will get themselves a pickaxe and help you mine.

You will be making progress with double the speed when you have your companion with you. Of course, this feature is not without its limitations. You and your companion are basically sharing the same stamina bar and if you are not careful, you would find yourself passing out from weariness more often than you can count.

Honestly, this additional feature is simply amazing and I hope that they keep it for the coming games and maybe add some more improvements to it, like a different stamina bar for the second player.

THE THINGS WE DO OUTSIDE OF FARMING

Of course, this game is not just all about farming and Noby is a youthful kid with lots of energy to spend.

One of the activities you can do as mentioned before, is mining. You can head down to the mines to mine valuable minerals such as copper, iron and even silver amongst everything else. While mining for them does take out a hefty number of stamina, the payoff is entirely worth the effort.

These minerals can be used in lots of different ways from improving your tools, making new goods for our home and even improving the farm as a whole. Next, we have fishing and bug collecting. The fishing rod and the net are your best friends to catch them all and the two activities will test both your patience and timing. Approach the bug too quickly and it will fly away and if you lose focus, the fish will run away with the bait.

The fishes and bugs you catch have several uses for them. Some can be given as gifts to the locals to improve your relationship. Certain fishes can be used to cook dishes that boost your stamina while the honey bees you catch will provide honey for your farm. Personally, I prefer fishing between the two as not only is it calming, it also does not use stamina.

In line with its Doraemon name, the game also comes with Doraemon’s Secret Gadgets. You’ll unlock them as you progress into the game and they help you immensely in the game. You have the Anywhere Door that warps you anywhere on the map, the Rain Cloud that can water the plants for you and even a flute that gives Noby the ability to swim underwater.

What is even better is that these Secret Gadgets are entirely optional and you are not required to use them to complete the game. So, for players that prefer the more “traditional” farming experience, this is the best option for them. MAKING FRIENDS IS MY SPECIALTY

Much like every Story of Seasons game, you can build relationships with the locals but without the romance aspect of the mainline game.

You can become friends with the locals by talking to them on a daily basis and even giving them gifts. As you build your relationship with the locals, you’ll get to witness new cutscenes that tell you more about them. Advancing in their individual stories will give you bigger rewards and even help progress into the main story of the game. 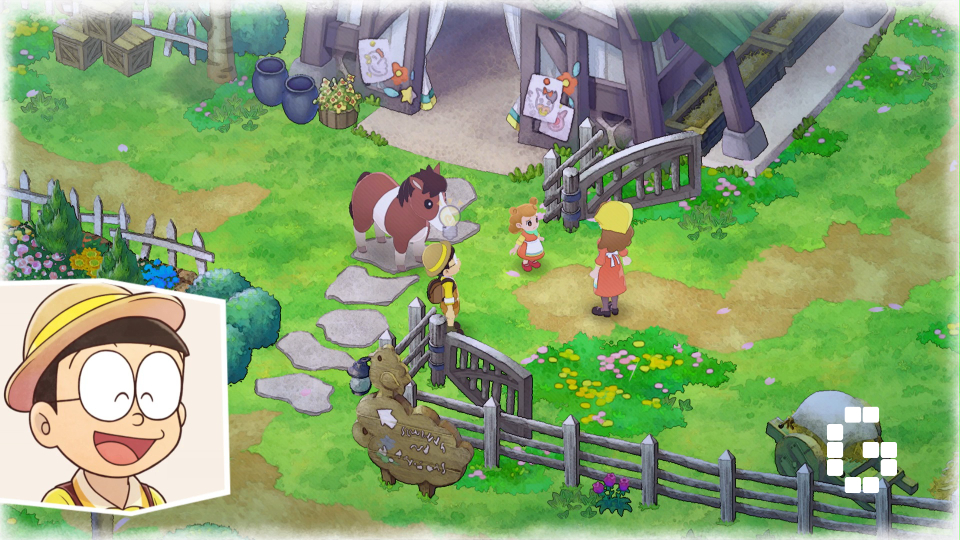 There are times when the villagers will come to Nobita for a request, sometimes involving getting specific items for them and completing this help in improving your relationship with them. They even reward you with money so all the more reason to help them out.

The locals of Illuma all come with unique personalities and loads of quirky traits, good and bad. It is pretty fun to learn about each of them and the subplots they bring.

Of course, all this relationship shtick is optional if you want to concentrate entirely on farming. However, you will miss out on what makes the game appealing in the first place. Yeah, sure more free time for you to farm but living a lonely life in a game about friends is kind of missing the point, don’t you think? THE VISUALS THAT BRINGS LIFE

Similar to the original Doraemon Story of Seasons, this sequel’s artwork is both attractive and endearing. The watercolour-esque that they are going for in the game’s sceneries and characters are just simply amazing. The music does a superb job in being calming and relaxing, creating a pleasant ambience as you go about your everyday activities in the game.

If I were to nitpick on the game, it would probably be the in-game map. With the way it was presented, it took some time for me to figure out where each path leads to and some paths also don’t quite appear as they do on the map. Doraemon’s true selling point is in its storytelling. While the main objective remains the same as previous Story of Seasons where you improve the town and relationships with the residents, the inclusion of side plots that involves every member of the community really makes me feel more attached to them.

The plots are realistic and developed in a manner that makes the daily tasks we do in the game feel like a worthwhile objective rather than just menial missions.

The activities of the game like farming and mining are pretty much the same as the original but Doraemon Story of Seasons: Friends of the Great Kingdom was able to make it all seem fresh.

Doraemon fans will definitely love the game and those looking for a fresh Story of Seasons experience will find themselves enjoying this change of pace that the game offers. 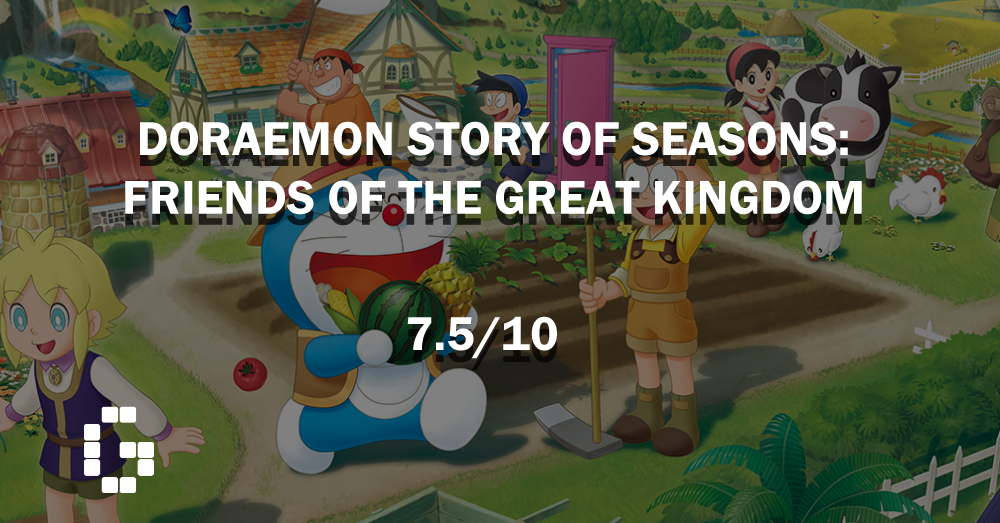