Doraemon Story of Seasons: Friends of The Great Kingdom Interview with Koji Nakajima – Creating Memories with Your Friends

Doraemon Stoy of Seasons: Friends of The Great Kingdom will be the latest title of the Doraemon Story of Seasons franchise, and we got the opportunity to talk with Producer Koji Nakajima in an interview.

Note: This interview is edited for clarity The original Doraemon Story of Seasons has a really nice laid-back feel. So how are you improving it in Friends of the Great Kingdom to kind of enhance the calmness and the casual feeling to it?

So this part about how we should improve the game is by trying to put more effort into the graphics wise. The past title is more of a storybook artwork. But for this new title, we are trying to implement a more realistic feeling like sunlight reflection on the water, and the wind sound, so with this kind of graphics we let the users experience more of this heartwarming kind of feeling.

Another aspect would be the additional perspective point which allows users to be able to see the entire background to experience the atmosphere even more. One of the main points of this title would be trying to expand and adventuring the fun of the Doraemon IP, one of them would be going on an adventure, harvesting plants, and how now you can now explore underwater, so you can now relive those dreams from this series.

What are the main differences between Friends of the Great Kingdom and the first Doraemon Story of Seasons in terms gameplay?

Most of the crops and items that we already have will also be implemented in this game as well, and of course, we will have additional crops and items to enhance the experience along with hidden or specialized items. As for the gameplay we have offline 2P mode, so we can have a local multiplayer session with friends or families to tend your farmhouse and harvest together.

Another feature that is also our main focus would be a more friendly game balance for players to have more enjoyment, this is especially for the UI since there’s feedback on how the UI from the previous title is a bit tough to navigate, so we take reference from another Story of Seasons title to implement a much better UI.

Farming simulation games tend to be popular among casual gamers. Is this one of the main reasons why the game is launching on Nintendo Switch?

Of course, that is one of the reasons but the main point of this genre is trying to appeal to everyone, not just casual gamers but also other audiences to easily enjoy a Doraemon IP. Of course, this is also not just for Switch, because we also plan to bring it to more platforms and how you also mentioned that the game is getting support for Thai and Bahasa Indonesia languages.

Is there any part of the farming simulation genre you felt particularly enhanced by this Doraemon Story of Seasons?

Since this is part of Doraemon the main attraction would be hidden items since Doraemon would often bring out unique items from his pocket to make the farming activity more convenient and enhance the overall gameplay as well. So we’re really trying to push this experience as a Doraemon game.

Was there anything from the previous title that you couldn’t implement in the final version but you manage in the Friends of the Great Kingdom?

One of the two main points would be the offline 2P mode and the online implementation since the previous title was very one-player focused. So for this title, we want to make sure that you and your friends and family can enjoy this game together. While playing this game everyone can actually form a strong relationship, so this is one of the main focus that we want to push.

Would there be any iconic relationships system in this Story of Seasons?

One of the main points from the previous title was controlling Nobita and how it’s a very solo-like experience, but for this title, we have a buddy system and this is one of the biggest changes.

Since all the main characters will be living together in a farmhouse obviously this kind of relationship event will be happening as well. For example, there may be a birthday or something. So for this title, we really focused on the bond of friends like how title is always associated.

Would there be any fast travel feature like the “Go Anywhere Door” in this game?

Yes, the Go Anywhere Door will be implemented in this game. We try to reduce the stress when navigating the world with this feature and there’s also a specific hidden item that could increase the movement speed as well.

Is this game accessible to players who haven’t played the first Doraemon Story of Seasons?

The previous title had some issues, especially with the UI and game balance, so for this title, we try to fix that and make the game to be more enjoyable. For this genre everyone can easily access this kind of game, so we also try to put more effort into the main scenario so players who don’t know about Doraemon can come in and have a great time with this game, with the hope that they can enjoy Doraemon IP and try to watch the anime, movie, or the manga as well.

How vast the game would be in terms of map size compared to the previous title?

Of course, we also expanded the map even more, but rather than just make it bigger, we put more focus on the point of interest. Since the size would affect players’ enjoyment as well, we try to improve the enjoyment when exploring the map for example the underground cave and how you can feel the atmosphere even more, and how exploring underwater also can give off a totally different vibe.

But not only do we have a bigger map, but this is also a completely different setting compared to the first game so players could enjoy a much different and fresh experience when exploring the world.

A Story To Be Told 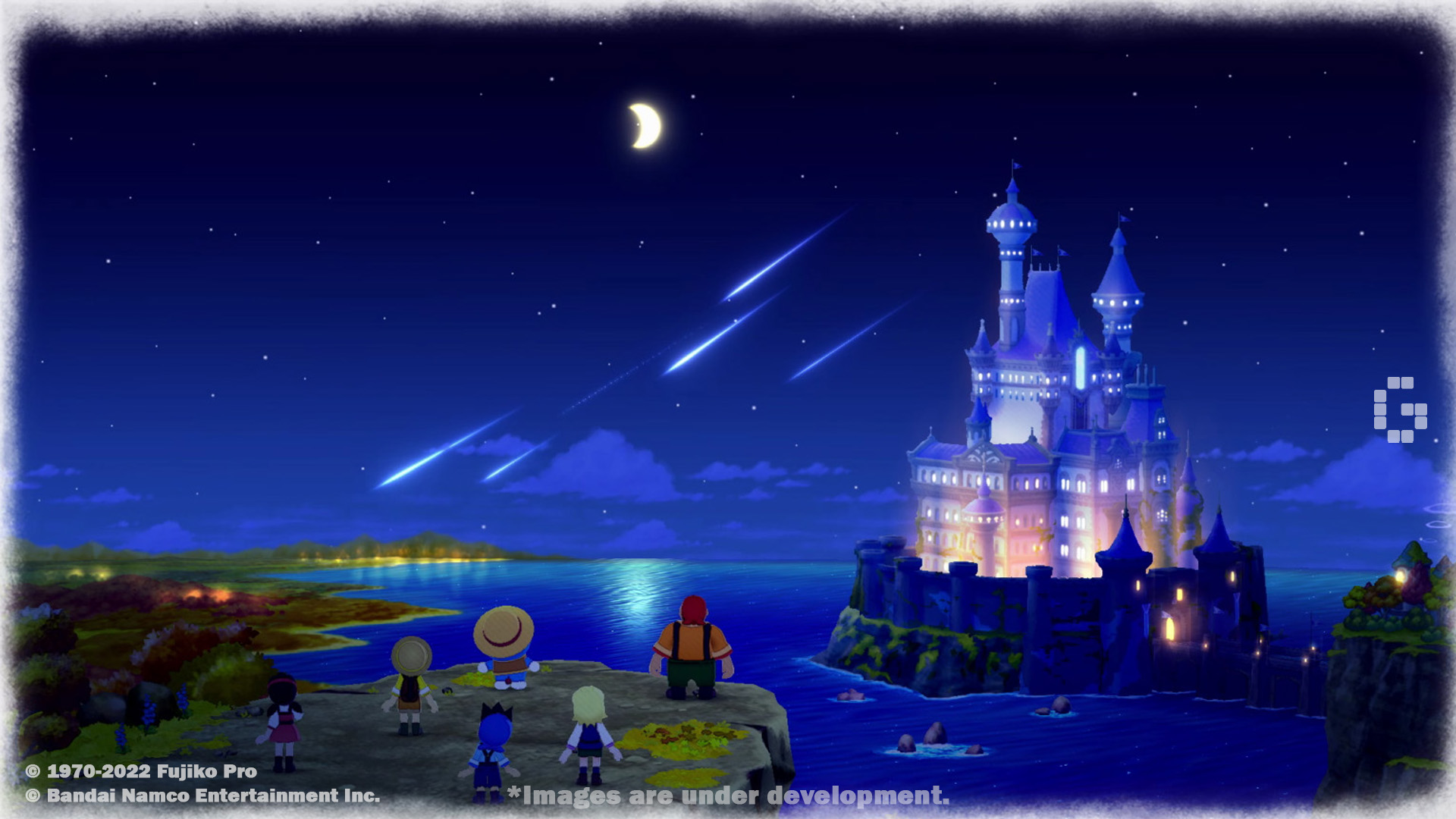 What feature of the game that Nakajima-san is especially excited for players to try out?

Mainly I want players to enjoy the entirety of the game, but there are two things that stand out more. It’s how we collaborate to get the Doraemon license, so then we can create a heartwarming story and an experience that feels like a proper adaptation to Doraemon. The 2P mode is also something that we want to highlight for this title since it can enhance the experience a lot more since now you can actually play together with friends and families while also creating a stronger bond with them.

What part of the game that Nakajima-san is most proud of?

We put a lot of effort into the scenario, so this is something that I as a producer am especially proud of even in the sub-scenario as well with other side characters that you can interact with. We hope our approach to the story could give a more heartwarming experience for players. This is going to feel like a classic Doraemon story where the beginning part is a lot more laid back before Nobita needs to unite with Doraemon and his friends to overcome any hurdle together.

What are things that it’s better for players to do with a friend or family in 2P mode?

We didn’t want to force this feature to be something that is a must since we want players to experience the game at their own pace. But for 2P mode, the difference would be faster harvesting time and how you can yield more crops as well.

Besides the local 2P mode, is there any plan to add an online multiplayer mode in the future?

As of now we have no plans for it since our main focus is to deliver the most optimal experience based on what we already worked on for this title.

Are there any characters in the game that is based on people that the development team knows in real life?

There aren’t any side characters that are based on people that we know, because we trying to create something that is more focused on the perspective of the Doraemon world itself. This is something that also applied to the original characters as well.

How does working from home affects the team’s ability to separate their personal and work life?

As a producer, it’s very hard to see whether the demand of the market is high or not, but overall we trying to push this game to reach out to more people to help with their mental state and be more relaxed in these trying times. We hope that players will be happy and enjoy this game that comes with improved graphics, a heartwarming scenario, and a deeper relationship system.

Are Friends of the Great Kingdom officially supported in Thai?

Bandai rep: I can go ahead and say that yes the game will support in Thai and Bahasa Indonesia.

What is the motivation behind adding the Indonesian language to this game?

Bandai rep: Bandai Namco has always been looking to cater to more gamers and expanding our fanbase. We definitely want to localise more titles to help more gamers play their games better and have a more seamless experience with their first language. Just to note that this is the first title that would be localized in Bahasa Indonesia.

We’d like to thank Koji Nakajima for answering our questions related to Doraemon Story of Seasons: Friend of the Great Kingdom. The game will release sometime this year for Nintendo Switch, PlayStation 5, and PC via Steam.