by Refluxxy
in All, News
Reading Time: 1min read

Blizzard Entertainment and NetEases’ upcoming mobile game title Diablo Immortal had their pages updated on various of download platform such as Google Play page and Tap Tap, could this possibly be a tease to a Beta version of the game coming soon?

Diablo Immortal is a mobile MMO ARPG which did not had a good start during the announcement at Blizzcon 2018.

Over at the Google Play page for Diablo Immortal, it got updated recently after the change on August as well. And at the same time, the page on Tap Tap (Tap.io) also had been adjusted. 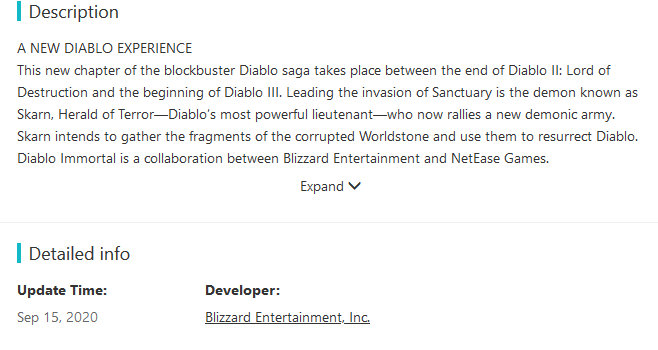 At the moment many people are still working at home, so it may be that Blizzard cooperates in this way to download the app. Meaning the internal tests is still not over yet.

Although, according to Rhykker, who is a respected Diablo Youtuber, gave his two cents about the update saying: “I do suspect that this has implications that things are happening, things are heating up. And maybe we’re not too far away from external testing starting.”

Diablo Immortal is a mobile MMO ARPG currently planned for iPhone and Android devices. We want it to include all the things you know and love about Diablo: multitudes of monsters to slay, troves of loot to collect and customize, and powerful classes to play with friends or on your own.