Battlefield is back and promises to be better as ever with Battlefield 2042, once again brought to you by Electronic Arts and DICE. With early access to the beta that you guys will be getting on 8 October, here’s our initial impressions of that experience!

First things first: Battlefield 2042 does NOT have a single player mode, instead being a full-blown multiplayer FPS with up to 128 players per round. Expect to spend up to 30 minutes per round as everyone slugs it out. The beta also only has one mode – Conquest – and the Orbital map. The rules are simple: capture areas of the map to score, and the team with the highest score wins.

Four specialists are in the beta, with ten at launch. The crew available are:

The game looks absolutely gorgeous, deserving of the hype. The storm effects don’t seem to affect visibility as much as you might expect, but it does make the field look dimmer due to the clouds above you. As enormous the map is, the devs have informed us that Orbital is a “medium” one. Despite having up to 127 other players possible in a single game, the sheer scale makes it likely that you won’t be encountering anyone else for whole minutes. Fortunately, this is a non-issue, as you can readily re-deploy in action-packed areas. If you need to drop off a tall building, be sure to deploy your parachute or learn how reality strikes when you hit the ground. The available selection of specialists have their very clear niches. As one whose aim is garbage at best, not even Falck can save me from playing strict support roles with how you need to aim with her to heal allies. Just put someone who loves friendly fire in that role, it will surely go well. For a quick pace, Mackay is excellent with his high mobility, with his trusty hook to get him where he needs.

Should you get downed, your allies can come over to help, or you can simply choose to redeploy. You would like to balance either choice, as dying too frequently within a short time will impose a redeployment cooldown. So much for corpse runs. Before you actually deploy, you can take your time to choose your specialist and your load-out, with presets available. There is a certain level of grinding required, as more guns are unlocked through levelling. Pre-deployment, scopes or muzzles can’t be selected, only swappable once you’re on the field. This is their Plus menu; the momentary adjustment, while allowing for more versatility, could make you vulnerable to attack. These attachments could drastically change how a gun handles, so have fun! 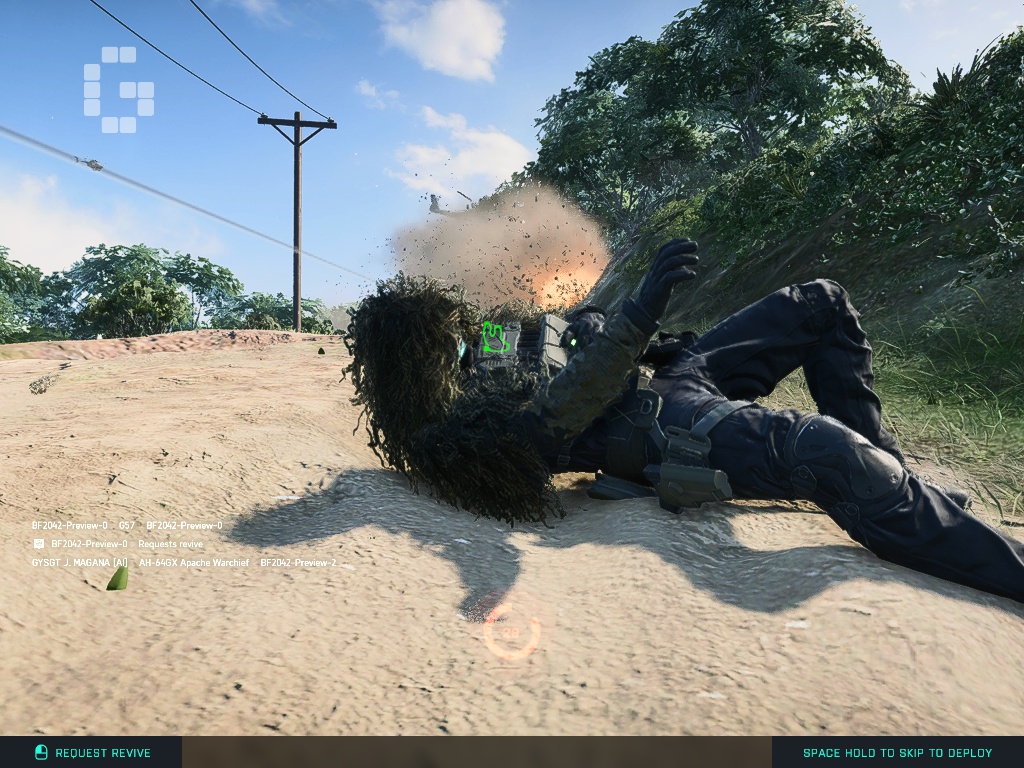 The gunplay is definitely solid and satisfying, without too many flashy effects for visual clarity. This doesn’t extend to identifying allies or enemies though, as besides getting shot at, the coloured diamond indicator above their head is tiny. Blue is for allies, red for enemies, and these diamonds can also vanish, which sounds explained in the Q&A, but could use some work. As for shooting feedback, it’s quite enjoyable as well. Depending on your preference, the actual kill feed might need some more pizzazz.

You don’t get to carry around much ammo, give or take roughly 5 magazines maximum. Enemies drop some ammo when killed, though you’d rather not depend on this. An ammo crate is available for you to bring as your gadget, which likewise has its limit. tl;dr: don’t just fire wildly. If you were worried about the servers, we didn’t encounter any noticeable ping issues, so kudos on that. Vehicles can be summoned just about anywhere at a button press. All you need is a clear sky and flat enough ground. If any particular ride of yours goes up in flames, that type will no longer be available to you, requiring a change to whatever’s left. The options available included:

There’s a few types that we can choose:

You can find the vehicle icon on the map to take it for a spin, or respawn in a teammate’s ride. Driving is easy, the maneuvering depends on the vehicle. As you might expect, handling the tank can be a challenge due to its size. You can blow up some unlucky fool or gun them down with your turret, though this also has some issues, primarily with how the camera works. Flying aircraft can likewise be fiddly, sending you spiraling to the ground instead. Fortunately, doing the whole shooting thing is super easy: zoom in and fire, swapping ammo types as needed. While you’re in a vehicle, someone can attempt to hijack your vehicle, so you may find yourself rudely shoved out of your tank. You can wrest control with default key E, be it a vehicle that was originally yours, or an enemy’s. The dance can be quite entertaining, all things considered. Or maybe you’re just wasting your time and getting baited while an enemy lies in wait with their M5 to blow you up, who can say.

Overall, it was an immensely satisfying experience to slug it out. Variations in the weather conditions can make things extra spicy, and they have not been slacking on the visuals. With only one simple capture mode to try out, we’re obviously not going to be able to pass judgment on how fun the whole package will be, but there should be plenty to figure out with how large scale even a “medium-sized” map already is. The gunplay being good is important of course.

Anyone who’s pre-ordered and pre-loaded can expect a roaring good time with the beta. See you out in the field!