ASUS ROG Flow X13 Review – On the flip side

by Ben
in All, Laptops, Reviews
Reading Time: 8 mins read

ASUS is attempting to kill two birds with one stone with its ROG Flow X13 2-in-1 convertible gaming laptop—that’s where this review comes in. After using it for a while, here are my thoughts on this laptop and tablet hybrid. As always, thanks to ROG Malaysia for providing us with the flow X13 for this review!

Note that our Flow X13 review unit did not include the ROG XG Mobile adapter. As such, we were unable to test it with its XG Mobile eGPU. All of my experiences in terms of performance are solely based on the laptop’s own hardware. At first glance, the Flow X13 may not seem like any other super thin and light gaming laptop, weighing at 1.3 kg with a thickness of 15.8 mm. However, its standout feature is its ability to flip its screen into tablet form. It isn’t just limited to being a laptop or a tablet, you can also set it to tent mode or stand mode which is more optimised for gaming with a gamepad or external keyboard. The tent mode, in particular, improves cooling due to its position.

In terms of looks, the Flow X13 sports a minimalist, all-black design together with your usual ROG embellishments. Made from magnesium alloy, the laptop is surprisingly sturdy. The flexibility of the hinge doesn’t compromise its build at all. Not only that, it’s very easy to flip the laptop into whatever mode you prefer. The hinge features the ErgoLift design that ROG is known for, making laptop mode a comfortable experience for typing.

As for the ports, the right side of the Flow X13 has one USB-A 3.2 port and a USB-C 3.2 port for charging. The left side has a 3.5mm audio jack, a HDMI port, and the XG Mobile eGPU port. Without the eGPU to help increase the number of available ports, the Flow X13 by itself is rather limited in terms of ports. If you’re charging the laptop, the only available USB port is the USB-A port, and if you’re using it with a mouse, then you cannot connect hard disks or pendrives to the laptop at all. Also, another minor gripe that I have is the location of the laptop’s power button. It’s situated right beside the USB-A port on the right side, which isn’t much of an issue when using it as a table. In laptop mode however, its high sensitivity resulted in me accidentally pressing it several times when adjusting it on a table. While the laptop seems small, the keyboard surprisingly has ample spacing for its keys. There’s plenty of room to move around and it’s easy on my fingers to type. The keys are quiet and feel nice to the touch.

Note that the keyboard backlight doesn’t include RGB, so don’t expect to go crazy with the colours. In terms of practicality, the white/light blue backlight will do the job just fine. The intensity of the backlight can be adjusted in three different levels.

As for the touchpad, it’s slightly on the smaller side, but it’s responsive and precise. As someone with large hands, I’d have preferred if the touchpad was larger to accommodate my size, but it doesn’t take too long to get used to regardless. The Flow X13 is equipped with a 13.40-inch display with a 1920×1200 (16:10) resolution. The display is also a touchscreen, and the 16:10 aspect ratio gives it more room to work around for general usage, which is great. Using the stylus pen that came together with the laptop, taking notes or doodling on the touchscreen was easy and hassle-free.

Note that the refresh rate for our ROG Flow X13 review unit is 60 Hz, but there are other models that come with 120 Hz refresh rate. If you plan to play a lot of competitive FPS games, higher refresh rate is ideal.

The laptop comes with a pretty standard 720p webcam right above the display. It will get the job done for just about any situation like conference calls and the like, but if you’re a streamer, consider getting an external webcam for the superior image quality. The Flow X13 comes with pretty decent speakers which are located on the bottom of the laptop. Obviously, using the laptop in tent mode where it’s not flat on a surface will make the audio sound clearer. Even in laptop mode, the sound is still pretty clear.

Bass is a tad bit lacking compared to the rest of the audio quality, but not a deal breaker at the end of the day. Everything is audible just fine. If audio quality is your concern, then the solution, as is for virtually all gaming laptop, is a good headset. The Flow X13 regulate its temperature pretty well for general use. It was cool enough for me to comfortably browse the web and watch YouTube videos with it resting on laptop mode on my lap.

As with many other gaming laptops its size, the underside of the Flow X13 will get pretty hot while gaming. In addition, the region right above the keyboard, just below the hinge is very hot and it’s best to avoid touching it during a gaming session. Setting the laptop to tent mode will mitigate this issue, but you’ll obviously need a controller or external keyboard for that.

Overall, the laptop fans are loud, but not as annoying as most gaming laptops. I only heard the fans whirring during intense action sequences. If you’re playing a 2D indie game or something similar, there shouldn’t be an issue. The Flow X13’s battery life lasted 3 hours for general use. Playing games eats through its whole battery in less than an hour. This is a rather big drawback for me. 3-hour battery life for doing low-intensity tasks like browsing websites is too short.

The remedy for this is of course, taking the charger wherever you go. As mentioned previously in this review, you’re only left with one USB-A slot when this happens, which more or less necessitates the external GPU for the ROG Flow X13, which itself is another thing to carry around.

The Flow X13 that I tested had an AMD Ryzen 9 5980HS CPU, which is great and a NVIDIA GeForce GTX 1650, which is not so great, especially when the bare minimum for most gaming laptops nowadays is an RTX 3060.

Thus, the following games that I tested had to be done at low graphics settings. Without the XG Mobile eGPU which, the Flow X13 can’t really perform as a gaming laptop.

The first game that I played was Valorant. While the laptop can handle medium graphics setting somewhat, low graphics setting is the way to go for a comfortable experience. FPS hovers around 110 FPS. 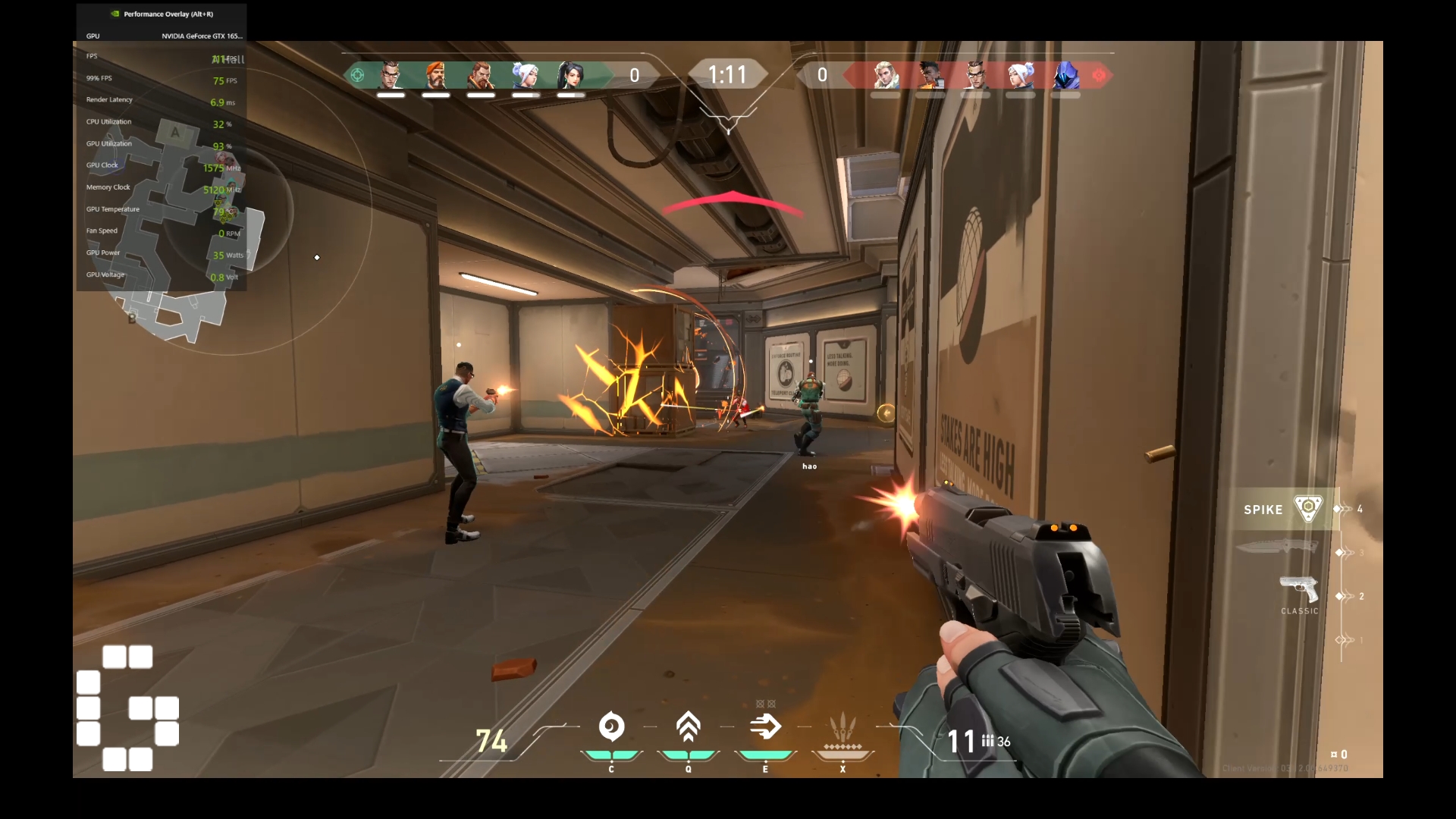 Next, was Remnant: From the Ashes. At low graphics setting, the game can be smoothly played, with FPS averaging between 70 to 90 FPS. The third game I tested was Control. The game couldn’t run even at low graphics settings. The only way to get it to work was tweaking around the settings manually and turning off some of the options. On custom settings adjusted to be the bare minimum, I was able to get the game to run at 60 FPS. It goes without saying that if you plan to game on the Flow X13, the external GPU is basically mandatory. 3DMark Time Spy gave the Flow X13 a score of 3,329. Once again, notice the disparity between the CPU and graphics card. While I did point out several shortcomings with the ROG Flow X13, make no mistake—this is still a solid choice for a laptop that can handle a lot of everyday tasks well. The versatility that comes with its ability to turn into a tablet should not be underestimated. However, the poor battery performance is a dampener.

As a gaming laptop, the Flow X13 desperately needs the RG Mobile external GPU. Without it, it cannot be considered a gaming laptop. The price for the laptop ranges from as low as RM5,499 to as high as RM13,499, which includes the eGPU. If you’re an artist or someone who could use the added versatility provided with its tablet mode, then definitely consider getting the Flow X13.

You can visit the ASUS ROG website to browse through all the available Flow X13’s on offer.