With the finale of the anime series, the upcoming Assault Lily Last Bullet Mobage has gotten a new promotional video, showing off some of the game’s new characters.

The video was done in the same style of the anime, and heavily features the main characters from the Hitotsuyanagi Squad.

While at first glance it might just look like reused footage from the anime, it actually shows new sequences as the girls from the other schools make an appearance as well.

Assault Lily Bouquet mainly focuses on the girls from Yurigaoka academy, as you can tell by the black uniforms. However, the anime also briefly featured cameos by girls from other schools in one of the episodes, in which a Lily-wide search broke out for one of the other characters.

These girls will all be appearing in Last Bullet, the mobile game which releases January 20th for Android and iOS in Japan.

No Global/English release has been announced for the game so far. However, since the game is being published by Bushiroad, it’s not too far-fetched to assume one would be coming 6 months later, same with their other titles D4DJ, BanG Dream and Revue Starlight.

The game is currently available for pre-registration. 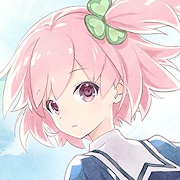