Survival Quiz City is a new game from developer Bandai Namco and publisher Phoenixx that is shaping up to be a competitor against Fall Guys. The game is expected to release sometime later this year, but we were able to take part in the closed beta test for the game.

What is Survival Quiz City?

The winning team doesn’t need to go through the obstacle course. Instead, their job is to make things as difficult as possible for the losing team, who needs to go through the obstacle course. The winning team gets to equip weapons like guns and bombs as they try to knock off the losing team or make them waste time. Hitting the losers with your weapons will also steal money from them, which is used to buy upgrades/unlock more weapons. It’s very fun to be the winning team. There is little stress, and you feel very smart (for answering correctly) and powerful (because you can bully the losers). The losing team’s job is to try to complete the obstacle course as fast as they can. If you’re on the losing team, you should also try to collect the coin pickups to get money, but also simultaneously avoid getting hit by the winning team so that your money doesn’t get stolen. If you fail to make it to the finishing line before the time ends, you will be eliminated.

In between rounds, all the players will be transported to the shopping area. Here, the money that they earned from the previous round(s) can be spent to buy upgrades or keys. Upgrades give players stuff like faster movement speed or a longer stamina bar. Keys are for unlocking higher tiers of weapons (only useful for winning team). Some of the higher tier weapons are quite overpowered, like the upgraded bomb which can easily knock down a group of losers and steal their money.

Depending on the rules set by the host of the room, the way the game determines the winner may be different. By default, the winner is the last person standing and the fastest player in the final round. Alternatively, there is also the Rules set called Bounty Hunter. In this mode, the player who has the most money when the final round ends, wins. Even before entering a match, the waiting time in a room is very long, more than 10 minutes for me. Note that this is understandable as it was in closed beta, and there weren’t that many people playing. Each session had around 25 – 30 players.

I really enjoyed the quiz element of the game. The questions at the start of each round have 4 different answers (i.e. Who Wants To Be A Millionaire) and are mostly trivia/general knowledge questions. The 4 – 6 players (depends on how many still surviving) who answer correctly the fastest get to be in the winning team.

As the winning team, it’s pretty fun. You can set traps in advance on the obstacle course and position yourself to shoot the losers. The game becomes a third-person shooter, and you basically feel like a god.

As the losers, it’s a lot more stressful than Fall Guys. The game will put a marker on the top 3 fastest losers like it’s a racing game, so it’s extra pressuring if you’re in the top 3 as the winning team is more inclined to shoot you. Even if you’re not in the top 3, trying to complete the obstacle course while avoiding enemy gunfire is quite challenging.

Even though I say it’s stressful, I think the game did a good job in making the obstacle courses feel different from Fall Guys. The obstacle course in Survival Quiz City is not as difficult as the ones in Fall Guys—the difficulty comes from the winning team who loves to shoot anything that moves.

My biggest issue during the closed beta test is lag. The game’s servers are probably not that well optimised yet (I couldn’t choose SEA server/region). My character kept teleporting backwards because of the lag. Trying to play as the losing team is almost impossible. Hopefully, when the game officially releases, the servers will be more stable. Like a lot of obstacle course games/game shows, the colours are very bright and colourful. I really like the design of the player character. The half-dinosaur half-human creature looks so goofy, it’s actually pretty funny to see them run or shoot people.

Graphically I don’t have an issue with the game, but what I don’t like is the UI. The way in-game instructions or text appears feels quite low effort. Look at this example: 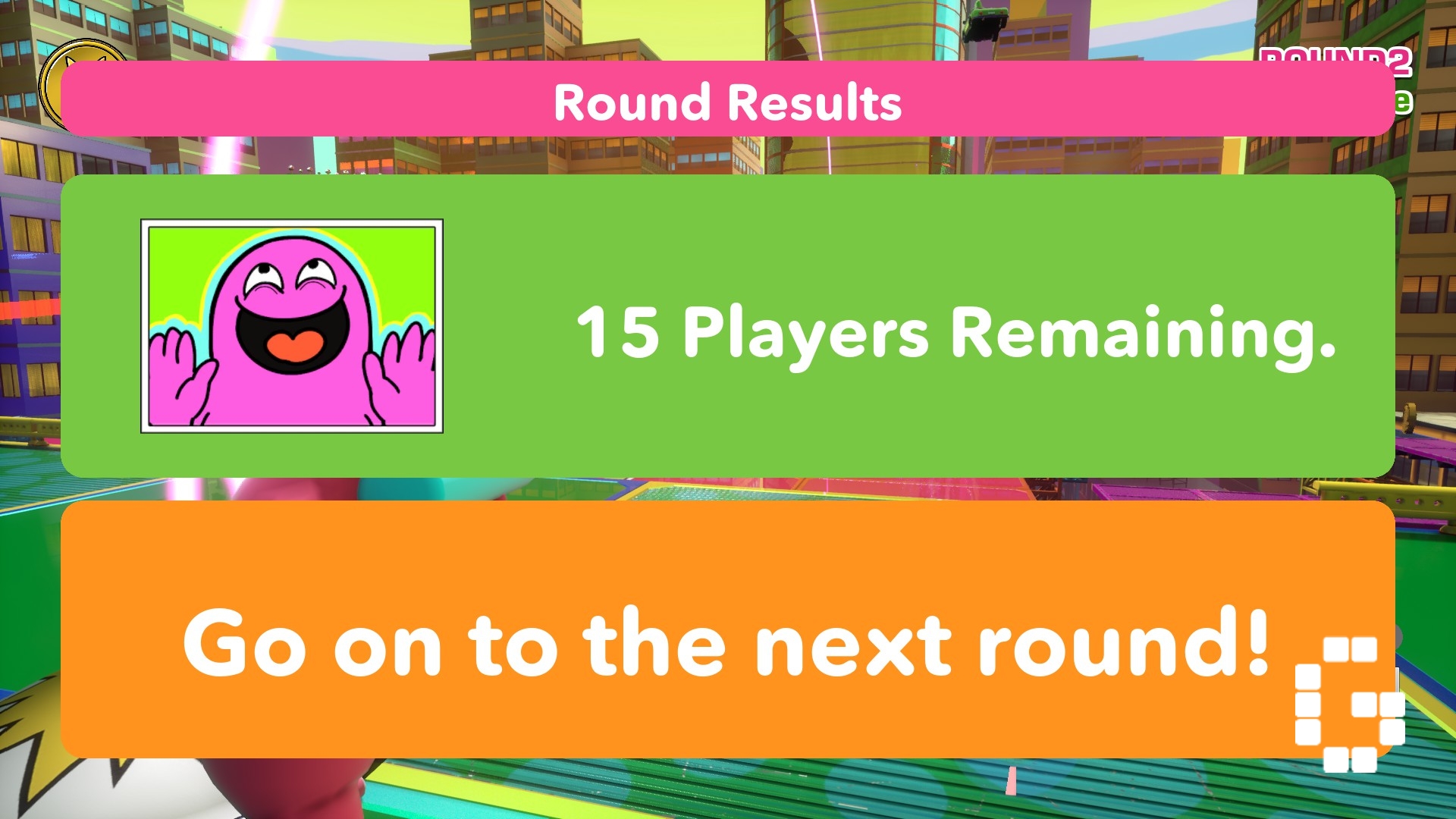 The text box that appears feels like something made in PowerPoint. The borders of the text box and the font that they use can be more attractive. Right now, all of the text in the game looks like this and it makes me want to claw my eyes out. I really hope the developers will improve on this aspect when the game launches. Also, there were spelling errors here and there. Even though my gameplay experience was super laggy and the game’s text looks ugly, I really feel that Survival Quiz City has potential. The way the game combines quizzes and obstacle course mechanics is very interesting and helps to keep each round and gameplay session different and refreshing.

Hopefully, once the game launches, the game will be more polished and the game can get popular enough so that it has enough players for matching times to be short.

Check out Survival Quiz City yourself on Steam.