Hololive Members Are The Bosses In Little Witch Nobeta

Hololive members Polka, Fubuki and Noel will make their voice-acting debut in Little Witch Nobeta, which sees them voicing the game’s bosses.

Announced at TGS today, the developers of Little Witch Nobeta gave an update on the progress of the game, announcing that the popular Vtubers from Hololive would not only be making cameo appearances, but rather would actually be the game’s bosses.

With the exception of Vanessa, the other bosses had been shown in previous footage of the game, though at the time they were unvoiced. Considering the similarities in Monica and Fubuki’s design in particular, there’s no way to know how long the collaboration was planned for.

Here’s the list of currently revealed Hololive members in the game: 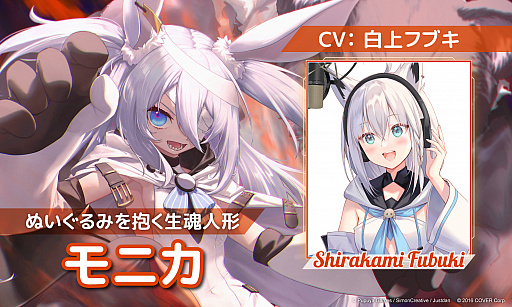 This is a relatively big deal for the vtubers, since this would be their first major role where they weren’t just voicing cameos of themselves, such as Fubuki’s cameo in The Detective is Already Dead earlier this year.

In the case of Polka and Noel their characters in the game are drastically different from their on-screen personas as well,

Little Witch Nobeta sells itself as a souls-like game featuirng Nobeta, a cute witch. The game is currently available on Steam Early Access.

The game releases some time in 2022, and will be available on PS4, Nintendo Switch and PC via Steam.