Tag along with a mini Oceanid with Genshin Impact‘s latest seasonal event, Wishful Drops! Here we go through the various steps to undertake to go through the event.

You will need to clear the Life Flows On (I) quest. Speak to Katheryne of Mondstadt. You’ll be directed to Connor of the Dawn Winery. Follow the quest marker and you’ll be fighting Hydro Slime. Once you defeat the slime, you’ll be tasked to take Endora to the Springvale spring. Go through the dialogue, and then you can finally begin, obtaining the Inquisitive Endora gadget. You’ll be coming across a variety of water creatures you should be familiar with from your time battling Oceanid. Equip Inquisitive Endora and fire the bubble. The bubble will stay in the overworld for a few moments, so if you can corral the creatures into the bubble, you will be able to capture them. The moment they’re in the bubble, you can move on to the next creature. Bubbles can only capture one creature at a time. The exploration can be made much easier if you bring along Cyro units to both freeze the water surface to walk on as well as the creatures. Kaeya’s Skill should be well familiar to you. You can also use Chongyun’s and do a Charge Attack to form frozen surfaces over a larger area, but his might not last as long if not helped by another Cyro user.

EDGE OF THE HORIZON 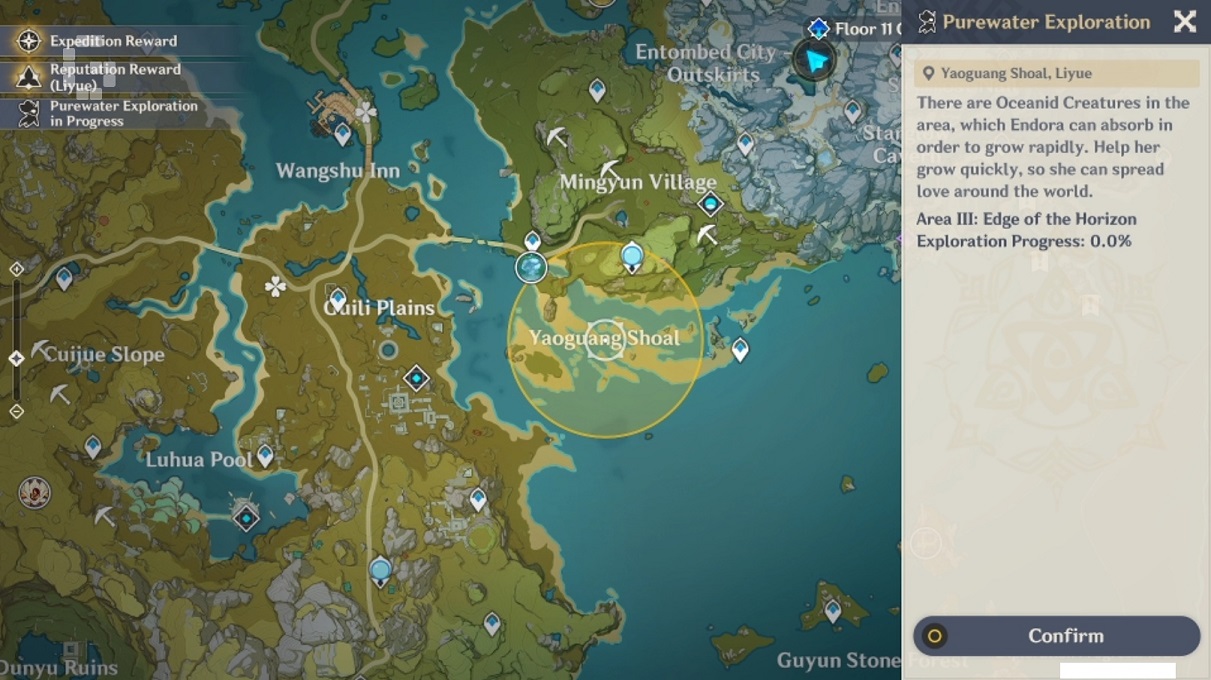 Even if you don’t have Cyro bridge builders, you can hold down on the button to use Endora’s Bubble Spit. The maximum range, as shown above, is decently far, though of course if you can freeze the creatures it’ll help that much more. You will probably need to wait around for the creatures to respawn and capture in this area. Once you complete this exploration area, you’ll be able to do Life Flows On (II) quest. You will be tasked to challenge Rhodeia in Rhodeia’s Rage before the event completes.

Here, you’ll be able to battle against an Oceanid with different mechanics. You will be able to directly attack Oceanid, with different attacks while retaining the summons. When Rhodeia dives for her first phase, you will need to defeat her summons to get her to surface. After that, her summons are an annoyance and will not lower her HP as much when you defeat them. Occasionally, you’ll find these Fitful Rapids that will lift you. You can accidentally trigger the lift and won’t be able to get back on, so be careful. Other attacks include these whirlpools, from which large bubbles can surface. Since she can be attacked directly, feel free to do long range snipes if you’re on a Fitful Rapid.

Once you defeat Rhodeia either solo or co-op, you can earn up to:

Wishful Drops by all accounts is a pretty simple fight and get rewards event. Too bad Childe will be less useful when you remember his Burst does Hydro damage, but hey.

The Last Of Us Is Getting A Remake

The Last Of Us Is Getting A Remake