Red Solstice 2: Survivors is not a new sight, as we’ve tried out its alpha before. You can check out our impressions of that here. The game hasn’t changed all that drastically, so you can consider this review roughly a retread of the preview.

STARTING THE GAME: WELCOMING THE EXECUTOR

They let you skip the tutorial and the first mission which is honestly really nice. They’ve added a brief, new cinematic to kick off the story, where you Executors have been awakened to embark on a secret mission to rid Mars of the STROL mutants. Why does it have to be secret, though? The impression I got from the preview is that the NPCs around you knew who you are, but whatever really. It’s got that suitably sci-fi vibe as you endeavour to make the planet hospitable. The story is unlikely to be what impresses you in this game, but tropes are alright. There is an extensive Archives section, with many files for you to peruse. There’s various lore tidbits, information on the items and buffs you may come across accompanied by images so that you know how they look like, a dossier on interactable stuff and the bestiary as you come across the creatures on the planet. There’s also text tutorials on the systems in the game, if you ever need to refresh your memory. All of this information is very easily accessible, so even if you haven’t played the first game, you can probably get pretty quickly up to speed as to what awaits you here.

There’s basically no change here. When you start up your campaign and select your difficulty, you can see what the modifiers are for them, giving you that rough numerical estimation for various aspects. You as the Executor, move around the map with mouse clicks, with skills or items bound to hotkeys. You can field three NPCs to your team whom you cannot fully control, though you can use simple commands to focus their actions. Should any of them die three times within a mission, that NPC will be permanently deceased. The manual and overwatch modes are still here and work the same way as the preview. To recap, manual lets you see further, is more powerful and fires when you decide to, with the drawback (?) being it’s possible to miss if your aim isn’t good. Overwatch mode makes your character automatically attack once they’re in range of you, indicated by a circle around your character, with a 100% guaranteed hit on any creatures. In exchange, your range is more limited.

You’ll find consumables during a mission, which you’d likely be juggling around as you only have limited slots. Besides that, you have your active skills. Pretty standard.

Compared to the original Red Solstice, the maps are bigger with more places to explore and have more variety in design and terrain across missions. You can take advantage of certain terrain, like cover, during combat as needed. Interactable items are scattered all over the map, so you have the option to open up the archives to study them all and learn what to keep an eye out for. From detonating oil barrels to destructible environmental pieces, there’s quite a few options when the going gets tough. 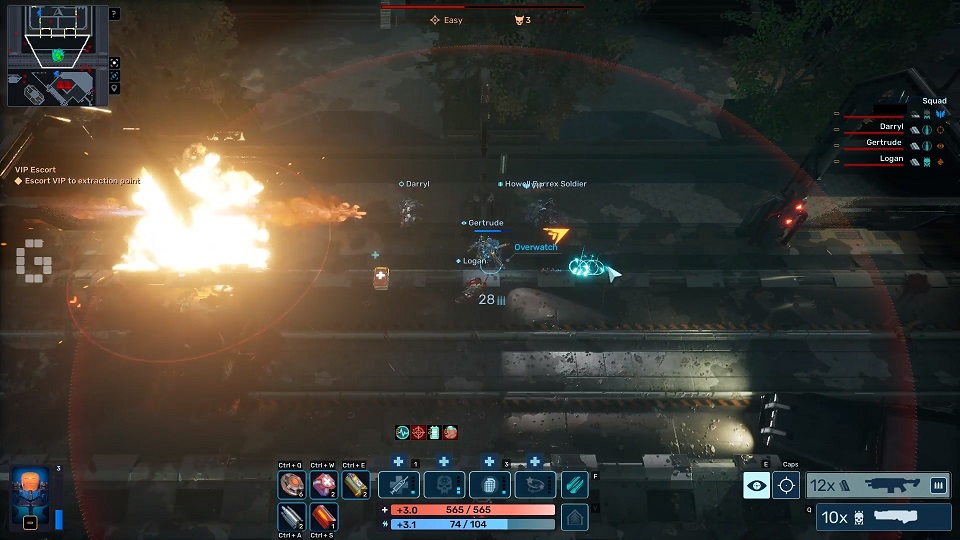 Unfortunately, traversal can be on the slow side, so it depends on how thorough you want to be when faced with large areas to cover. You need to watch out for your ammo stock; tough luck if you can’t find any along the way as those monsters try to tear your face of. The weather becomes a factor too, like how continuous lightning storms drain you of energy while slowing you down. A fun time it is not, when monsters start swarming you.

You could find some companions during a mission to help you out, joining you once you complete it. Though you can’t control AI teammates directly, you can still improve them by customizing their roles and equipment for loadouts to fit the situation. Work on their ranks and add skill points to your skill tree to further improve parameters, to give you better odds in survival. 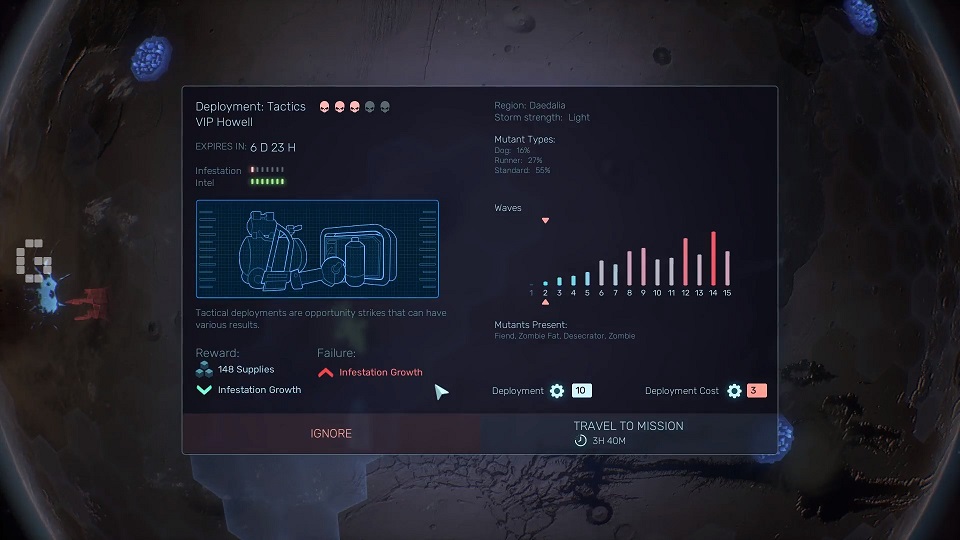 All the while, you go from mission to mission on the world map, trying to gather enough resources to research upgrades and simultaneously managing infection levels. The archives inform you that you can’t take on ALL the missions, so just try to juggle it the best you can. Should you not complete enough missions to keep the infection level from hitting 100%, that’s a game over.

VERDICT: MARS AND YOU

Red Solstice 2: Survivors has expanded quite a lot from the first title, while maintaining some familiar elements. The systems it has aren’t the most groundbreaking, but they have decent amount of depth for those who want more complexity. That’s not forgetting the juggling you will be doing between missions and supply runs for research, highly reminiscent of X-COM.

With its increase in scope, the roughness can be more obvious to some of you and detract from what the game is trying to do. You can come across bugs where items have no effect, or you can’t even pick them up. Regardless, it’s still a pretty hefty game to sink your teeth into if you’re a fan of tactical strategy games, so consider getting it. Red Solstice 2: Survivors
Publisher: 505 Games
Developer: Ironward
Release Date: 2021-06-17
Microsoft Windows, Steam
Sequel to the best-seller ​The Red Solstice​. Plan your strategy and infiltrate a real-time tactical battlefield - alone or with up to 7 squad members. Can you demonstrate the combat prowess to survive and secure a future for humanity?
Give us some support by subscribing to our Youtube Channel !