by Trilz
in All, Origin, PC, Review
0

EA has released their latest Stuff Pack, Tiny Living for The Sims 4. This Stuff Pack focuses on one of the newer trends of tiny living, a subculture of living where owners forgo materialistic and extravagant housing for smaller ones. The reason one does this in real life is for a smaller environmental footprint, better sustainability and financial freedom! With that being said, let’s get this Tiny Living Review started and take a look if this Stuff Pack is able to deliver on that promise.

The first thing of note and arguably the biggest feature that Tiny Living adds is a new Lot Type called Tiny Home Residentials. Choosing this type of home will enable a self-imposed challenge type of property, where you have limited tiles to build on. The Tier 1, the most compact starts at 32 tiles. Tier 2 allows 64 tiles and the Tier 3 allows 100 tiles (not 128, unfortunately, that’d be too big).

Building within the confines of these limits will give you all kinds of bonuses! The bonuses are as follows:

As you can see, each Tier will gain all the buffs of the one before it as well, so a Tier 1 will have very little space but your Sims will live a very fulfilling life!

Now, I’ll start off by saying that this game isn’t perfect, there will be some tricks that you can use to eek out a little more space for your home. One of the most notable ones are using glass roofs to extend your home. The result is an alcove type of house, with additional usable space under the glass roof for furniture. Here’s an example of one such house. Despite the spacious feel, this home actually only counts the floor tiles and is a Tier 1 Micro-House! Here’s another beautiful multi-leveled tiny home, which really highlights the usage of one tile decorations and furniture. The multiple levels each have a different function and each room is jam-packed with furniture and decorations! Take note that each level counted each floor as different tiles, so this house is actually a Tier 3 house! To assist our Sims with their tiny lifestyle, Tiny Living also adds a slew of new furniture that will enable them in living in such cramped quarters. A lot of these are minimalistic and try to consume as little space as possible. Also one of the big featured items are Murphy Beds. Murphy Beds are foldable beds, that can raise or lower from your wall. These come in two versions, one with a couch and one without. There are also versions that have bookcases and stereo systems attached if you already plan to put one in and can save some Simoleons by buying the combo pieces.

With that being said, here are some of the furniture pieces. We’ve tried to lay out the different colors and styles for you to view them. 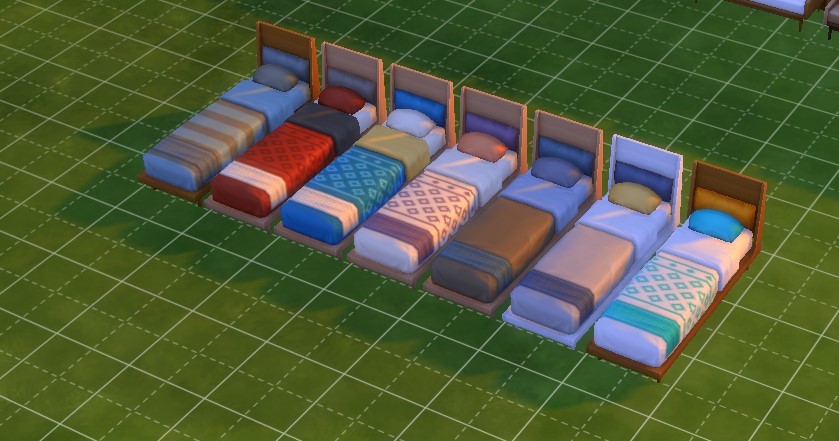 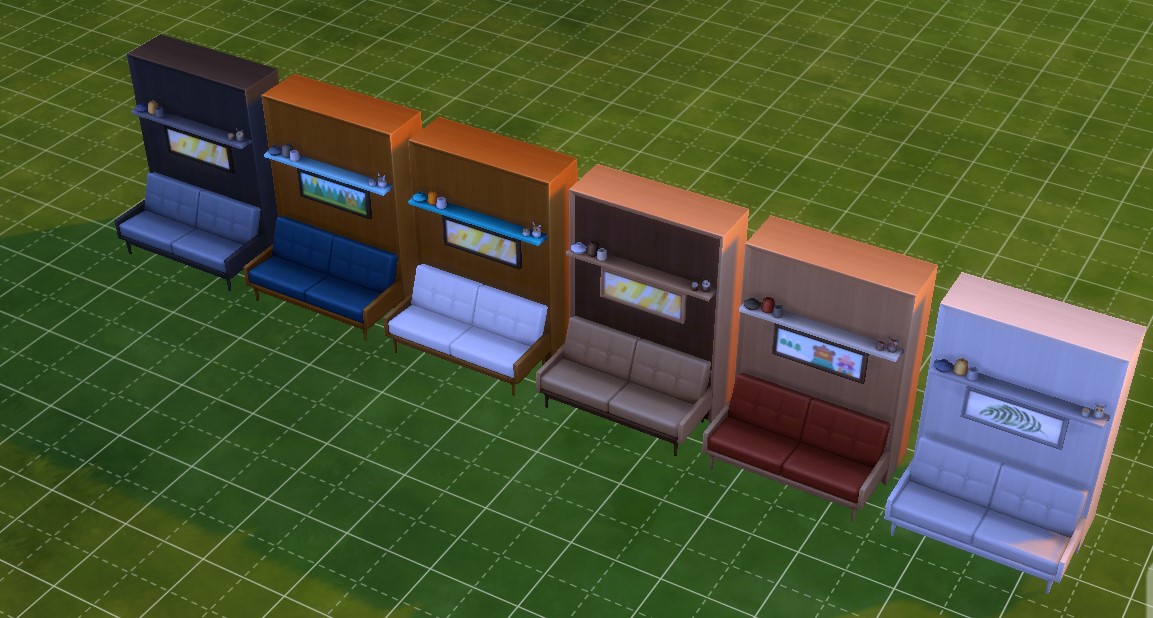 Now this is one of the things that disappointed me. There are a lot of cool interior design and tiny living furniture that just never made an appearance in the pack. Most notably, this was a missed opportunity to introduce something as simple as ladders and bunkbeds, absolute staples of the tiny home genre. There are even community-made mods that let you add bunkbeds, so why not Tiny Living?!

Other more common design elements like drawer-staircases, storage rooms under staircases, fold-able furniture, retractable/swiveling counters and tables that can be retracted into or against the wall. None of these really made an appearance, which is unfortunate, but might be asking for too much from a design/technical perspective.

Lastly, let’s talk about the Murphy Bed. It sucks. It still takes up 3×2 tiles and since Sims can enter beds from the middle, you still need to leave at least 2 half tiles on each side, effectively taking up 3×3 tiles. The only purpose a Murphy Bed can fulfill is if you also want a couch where the bed is, and those situations are few and far between.

Even then, the drawbacks of the Murphy Bed are enough to turn you off. Every once in a while, your Murphy Bed might malfunction, prompting your Sim to try and dislodge it. Doing so will have the bed slam on top of them, bashing them up and scaring them.

You can see above, my Sims is Inspired. Well, that didn’t last long as his mood was completely ruined by the killer Murphy Bed. On top of the Murphy Bed slamming on top of you, there’s a chance it slams into the wall while you’re sleeping. That’s terrifying.

I would be have been completely fine with this if it didn’t happen so often. In my testing, it seems to happen every 4 to 5 times. That’s a bit too high. Maybe 1 in 20 would be fine. Assuming I had to use it every night, that would be a small problem once or twice a month. But once or twice a week? That’s enough to ruin anyone’s day. The kicker is that the Murphy Bed has a chance of killing your Sim.

It is possible to upgrade your bed so that it breaks less often or an even higher tier upgrade that makes it unbreakable, but is the Murphy Bed really worth that effort? I don’t think so. But it’s an option nonetheless.

There are mods out there already that addresses this problem by reducing the Murphy Bed fail chance. If modders were able to fix something so quickly, I don’t see why it should have been an issue in the first place.

Tiny Living definitely missed some opportunities. The addition of the Murphy Bed was also a big swing and miss. However, it does add a new way to play the Sims, with some flavorful and satisfying payoffs. Overall, I think Tiny Living is a great Stuff Pack if you’re not expecting a full-blown tiny house simulator and can overlook the flaws of the Murphy Bed.

Give us some support by subscribing to our Youtube Channel !
Tags: EAOriginPCThe SImsThe Sims 4The Sims 4: Tiny Living
Previous Post

One Punch Man: A Hero Nobody Knows All Characters Revealed So Far

One Punch Man: A Hero Nobody Knows All Characters Revealed So Far