by CeeZee
in All, Industry, News, PC, Reviews, Tech

As ASUS announced their launch of the ZenBook Pro 15 back in August 2018, we were salivating on its beautiful technology that’s installed in it. The ZenBook Pro 15 is hailed to be a technological trend setter as it has a dual working screen which allows you to multitask, whether it’s for work or gaming. Yes, the ZenBook Pro 15 has the capability to play the latest games that’s out in the market right now as it is equipped with Intel’s 8th Gen Core i7-8750H processor and NVIDIA GeForce GTX 1050Ti.

The idea of a dual screen laptop or notebook may have existed before like Lenovo’s Yoga Book 2. However this is the first one that’s being sold commercially. The second working screen mentioned is not just a screen as it is multifunctional. Initially, it is a mouse pad when you lack the pointer device, but when you do have a mouse, you can actually turn that mouse pad into your second screen as an extension or a shortcut toolbar for many other applications. Don’t believe me? Check out our review down below for yourselves!

The ZenBook Pro 15 is a very beautifully crafted notebook with a premium aluminium body encasing everything that’s powering it. The top panel has its iconic Zen-inspired spun-metal finish which complements the Deep Dive Blue color scheme on it. If you are planning to bring a companion along in your adventures, the ZenBook Pro 15 is thin at 18.9mm and weigh only 1.88kg! You can easily bring it around and show off that beaut while you’re working. It also comes with a fingerprint scanner for security measure to keep your data safe.

If that doesn’t put a smile on your face, then wait till you flip that panel up! You will see a gorgeous 15.6″ 4K Ultra HD display with 7.3mm thin bezels that gives your eyes what they deserve. The superslim NanoEdge bezel provides a screen-to-body ratio of up to 83% – that means less frame, more screen! What’s more, the screen is also touch capacitive which allows you to take things personal with your fingers or with an ASUS Pen.

That’s not the only thing that’s touch capacitive. As mentioned earlier, there’s also a mouse pad which obviously is touch capacitive. But you can do so much more than just moving your mouse pointer around on your screen with it. The ZenBook Pro 15 is designed for users who are  content creators or just casual users to multitask on their notebook. As the touch pad can be turned into another LCD touchscreen as an extension of your main screen!

With the sleight of the fingers pressing down Fn+F6, you can cycle through the functions of the Screen Pad (touch pad). It’s controlled like a smartphone which has easy access to applications like YouTube, Spotify or your Music Player. So you can easily work on your projects while listening to your ‘work’ songs without having to TAB over to other programs when you can just touch on your Screen Pad. You can also customize and download more apps that are compatible on the Screen Pad too!

The keyboard is also a sight for the eyes as it is backlit which emits a soft light, making it look classy compared to EDM-loving RGB-keyboard fans. With two Thunderbolt 3 and two USB 3.1 Gen 2 ports, you can basically plug in any other peripherals to enhance your experience on the notebook. As the ZenBook Pro 15 is not specifically catered to gamers, the notebook is for users who balances work and life with a touch of gaming – which we will look into that next!

Work or Play – Why Not Both?

The ZenBook Pro 15 is great for users who have tons of work to complete and multitasking is the key to tackle the situation. However, there are times when one has to take a break from all that work-life and have some fun. That’s where the ZenBook Pro 15 which is equipped and ready to serve you with its Intel Core i7-8750H processor and NVIDIA GeForce GTX 1050Ti with 4GB GDDR5 VRAM.

That’s not complete of course, unless it’s also equipped with a whopping 16GB RAM, which it does! With all that multitasking capability, the amount of RAM is needed to run multiple programs at the same time. So far, we’ve played Assassin’s Creed: Odyssey, Fall Out 5 and Overwatch on it and they’ve all obviously managed to keep up at 60fps (in Medium graphics and some High); with a bit of tweaking on Overwatch, you can reach 120fps and above too! Paired with audiophile specialist Harman Kardon, the experience was amazing!

Even while you’re gaming, you can use that Screen Pad to project whatever stream or YouTube videos you’d like to watch while you’re playing (like guides or walk-throughs). This could prove to help a lot as usually we’d have to TAB in and out of the programs when we use a laptop. It has always been an issue to laptop users but now, the extra screen down below helps a lot in situations like these. However, be warned that you might experience some lag or FPS drops in your game while using the Screen Pad. It’s best to keep it off if you don’t need it.

Though of course, while you’re gaming and multitasking with multiple programs running in the background, it can pose an issue with the notebook’s intense processing use. There are two fans located on the right and left at the back of the notebook with 3 heat pipes to dissipate the heat from all those intense stress. However, the vents at the back were blocked by piece of aluminum that’s part of the top panel lid. Sadly, it kind of blocked the airways of the vents which can trap heat which in turn led us to experience heat temperatures of up to 90 degree celcius when it’s overclocking while gaming.

Below are the benchmark scores we did: 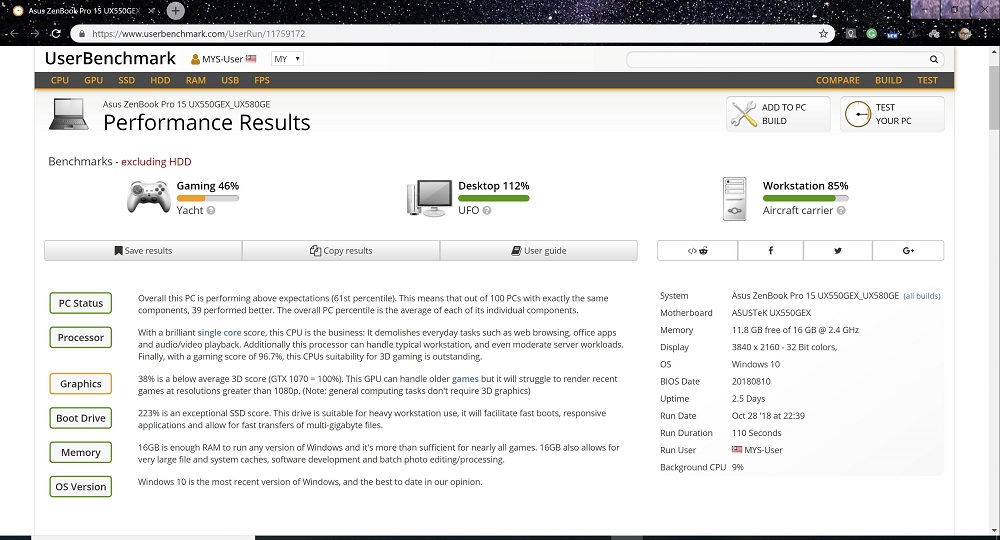 Because of its high-end specifications that’s installed in it, the ZenBook Pro 15 does not last too long if you’re constantly working, multi-tasking or gaming on it. After spending over 4 hours on it with the Screen Pad on, the ZenBook Pro 15’s battery finally gave up. It doesn’t last long but it is understandable as it does have a 4K panel and a secondary display which we use constantly. Switching the Screen Pad off is one way to save some juice on the notebook if you are not relying on it.

By switching off the Screen Pad, we’ve got better results of it having the battery to last over 5 hours. That’s an extra hour that you might need when you’re rushing your work! But if you’re gaming, we’d also advise you to turn off the Screen Pad as the keyboard is in quite a tight space, so your palms might just accidentally touch on the Screen Pad which results in your game having Tab-ed out. Plus, it saves your battery so much more.

If you’re looking for a notebook that enables you to multitask and increase your productivity, the ZenBook Pro 15 is a great companion. The Screen Pad comes in handy when you need to refer on slides, an article, a video and etc. It saves you the time of pesky tabbing in and out or cutting your screen in half to share two programs on one screen! With its powerful processors and graphic card, it’s also a great notebook if you are a content creator.

Priced at RM8,899, the ZenBook Pro 15 is a great companion for your everyday busy worklife. However, if you intend to game on it, it does get pretty hot on the keyboard. We’d suggest to use a controller if you are playing any RPG like Assassin’s Creed: Odyssey, Shadow of the Tomb Raider or Middle-Earth: Shadow of Mordor. Otherwise, be prepared to feel the heat.

Another way to curb the heat is to elevate the laptop and let it not sit on a flat surface without any space at the back to breathe. Of course, if you have a higher budget, you can buy the higher spec-ed one which is at RM10,999 that’s equipped with an Intel Core i9-8950-HK. With a higher spec, your laptop will not be stressed too much resulting in better temperatures. For more info, you can check out their official site!